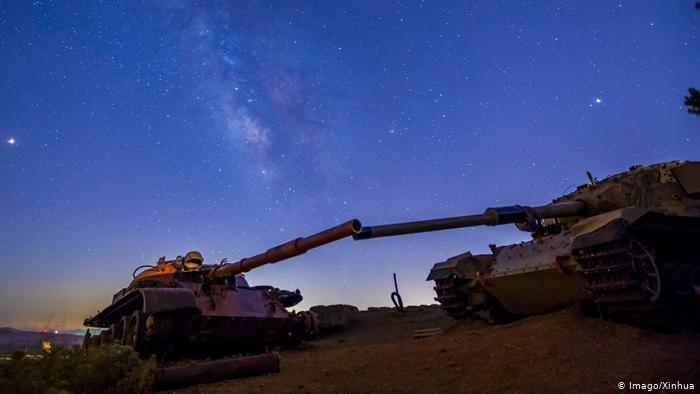 Who controls the Golan?

The Golan was Syrian territory until 1967, when Israel occupied it in the Six-day War and later annexed it. The 1981 annexation was not recognized internationally and UN Security Council Resolutions determined Israeli sovereignty over the area to be null and void pending negotiations with Syria.

Syria failed to regain control over the Golan in the 1973 Arab-Israeli war, which ended in a 1974 armistice and placement of a UN observer force along the ceasefire line.

Syria demands the return of all or part of the territory in exchange for any future peace deal with Israel. Repeated indirect and direct peace talks between Israel and Syria have failed to reach an agreement.

Read more: Trump: Time for US to ‘fully recognize’ Golan Heights as Israeli

There are about 40,000 people living in the Golan. Around half of them are Jewish settlers. The rest are Druze and a small minority of Alawites. Druze are Arabs who practice an offshoot of Islam. Many of them consider themselves Syrian. Alawites are a branch of Shiite Islam. Syrian President Bashar Assad and key figures in his regime are Alawites.

Read more: The Druze: The Middle East’s most persecuted people?

Why Golan is strategically important

The Golan are only 60 km (40 miles) from Damascus and provide Israel with a strong defensive-offensive position and vantage point to observe military movements across the border. On the other hand, Syrian control over the Golan would provide it with strategic heights overlooking Israel.

The security dimension has been heightened by the civil war in Syria, which has seen Iran and its Lebanese Shiite ally Hezbollah entrench themselves on Israel’s doorstep through their support of the Assad regime. Israel says Iran and Hezbollah pose a threat and the Golan provides a security barrier.

What resources does Golan have?

Another key issue is water resources in an arid region. The Golan catchment area feeds into the Jordan River and Sea of Galilee, both major sources of water for Israel.

The fertile land is used for agriculture, with growing areas for vineyards and orchards.

It is also home to the only ski resort in Israel.

What are the international repercussions of recognizing Israeli sovereignty?

There is more than a security and water-resource dimension to President Donald Trump’s announcement that the US should recognize Israeli sovereignty over the Golan.

It would also set a precedent that territory can be captured in war in violation of international law. Russia, for example, will take note of the inconsistency following five years of Western condemnation following its annexation of Crimea from Ukraine in 2014.

UN Security Council Resolutions 242 and 497, both supported by the United States, provide the legal basis stating that Israeli unilateral annexation of Syrian territory is in violation of international law.

Why is it a hot topic now?

The Syrian civil war has severely weakened the authority of the state, giving Israel an opportunity to exert its claims over the Golan. It also comes as Israel’s right-wing government has a friend in the Trump administration which already recognized Jerusalem as Israel’s capital in 2017 and moved the US Embassy there.

Trump’s announcement may give a boost to Prime Minister Benjamin Netanyahu ahead of tight April 9 elections and distract attention away from multiple corruption investigations swirling around him.