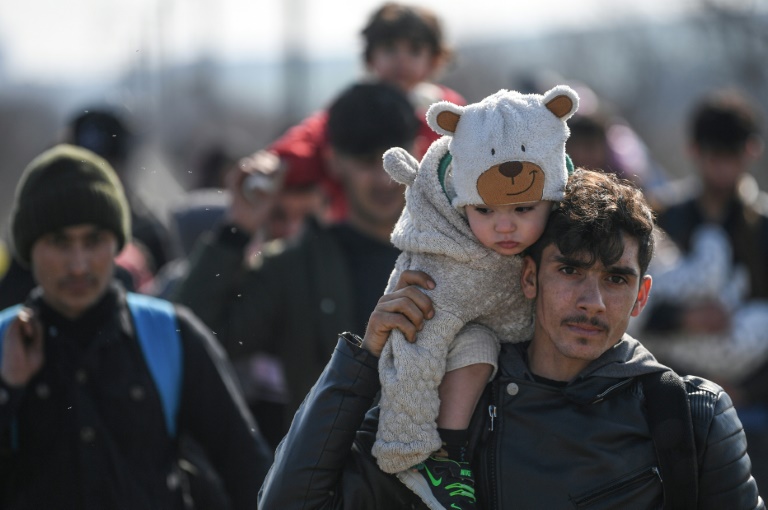 Greece said Sunday it has blocked nearly 10,000 migrants at its border with Turkey, which opened its gates to Europe as tensions mount over its deepening conflict in Syria.

Migrant numbers have swelled along the rugged frontier after Turkey’s president Recep Tayyip Erdogan said it “opened the doors” to Europe in a bid to pressure EU governments over the conflict.

Tensions have soared between Russia and Turkey — who back opposing forces in the Syrian war — after an airstrike killed dozens of Turkish soldiers in Idlib last week.

Some 13,000 migrants have amassed at the Turkey-Greece border, including families with young children who spent the night in the cold, the International Organization for Migration said.

An estimated additional 2,000 migrants arrived at the Pazarkule border gate Sunday, including Afghans, Syrians and Iraqis, according to an AFP reporter.

But as the crowds rushed to enter Europe, Greek police and soldiers blocked 9,972 “illegal entrances” from entering the northeastern Evros region in the past 24 hours, a Greek government source said.

Greek’s deputy defense minister said the country would not stand down.

“We are protecting the borders of Greece and Europe with a firm hand”, Alkiviadis Stefanis said in an interview in Skai TV on Sunday.

Migrants pressed on with efforts to enter Greece. Some attempted to swim across rivers or duck under fences, while others dragged suitcases as they marched toward the border where large crowds of migrants waited, some wrapped in blankets or sleeping on dirt mounds.

Clashes erupted between police and migrants on Saturday on the Greece-Turkey border, with police firing teargas at refugees who responded by lobbing rocks.

Greek authorities said at least 139 migrants have been arrested since Friday.

The EU’s border protection agency Frontex told AFP Sunday it was on “high alert” at Turkey’s borders with Europe and that it has “taken steps to redeploy to Greece technical equipment and additional officers.”

It had received request for support from Greece.

The developments recalled events in 2015 when over a million migrants fled to Europe, mainly via Greece in what became the continent’s worst refugee crisis since the Second World War.

The EU’s commissioner for migration, Margaritis Schinas, tweeted Sunday that he had requested an extraordinary meeting of EU interior ministers to discuss the situation.

Erdogan said Saturday that Turkey, home to some 3.6 million refugees, had opened its borders to Europe and did not plan to close them because “the (EU) should keep its promises”.

He was referring to the 2016 deal with Brussels to stop the flow of refugees in exchange for billions of euros.

The latest migrant influx swelled after an escalation of violence in Syria’s northern Idlib province, where an airstrike on Thursday left 34 Turkish soldiers dead.

Turkey said Sunday it was “successfully” continuing its military operation against the Russian-backed Syrian regime in Idlib — but insisted it did not wish to clash with Moscow.

Turkish forces targeted Syrian regime positions over the weekend after Erdogan warned Damascus would “pay a price” for its aggression.

Erdogan urged Russia to move out of the way and “leave us face to face” with Damascus.

Turkey said its forces destroyed a chemical warfare facility south of Aleppo, although Syria’s state media denied the attack and the facility’s existence.

The latest escalation has raised tensions between Ankara and Damascus-ally Moscow.

The Kremlin said Erdogan and Russian President Vladimir Putin could meet on March 5 or 6, which the Turkish Foreign Minister Mevlut Cavusoglu confirmed on Saturday.

Forces of Syrian President Bashar al-Assad pressed an assault on the last rebel-held bastion of Idlib backed by Moscow air power, which has killed hundreds of civilians.

Nearly a million people have also been forced to flee their homes in the region in the latest offensive.

Image: AFP / Ozan KOSE Some 13,000 migrants have amassed at the Turkey-Greece border, including families with young children who spent the night in the cold