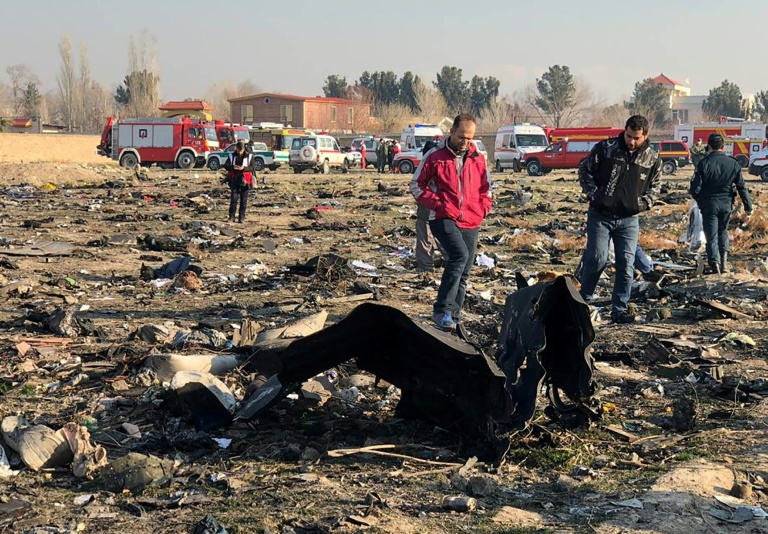 Bereaved friends and families joined in mourning after a Ukrainian airliner crashed near Tehran killing all 176 on board, as heartbreaking details started emerging about the victims, most of them from Iran and Canada.

Both Canada and the United States called for a full investigation to determine the cause of Wednesday’s crash, which came shortly after Tehran launched missiles at American troops in Iraq in response to the killing of a top Iranian general.

There was no immediate indication that foul play may have caused the Ukraine International Airlines (UIA) plane to go down soon after take-off, and Ukrainian President Volodymyr Zelensky warned against speculating on the crash causes.

Search-and-rescue teams combed through the smoking wreckage of the Boeing 737 flight to Kiev, but officials said there was no hope of finding survivors. 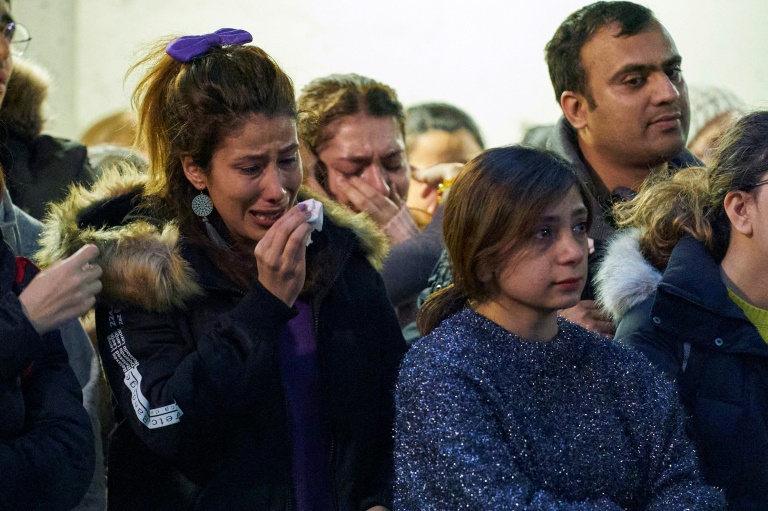 A memorial service at Western University in London, Ontario for four students among the victims of a Ukrainian airliner crash in Iran (AFP / Geoff Robins)

Body bags were lined up on the ground, and the passengers’ personal items — including luggage, clothes, a Santa Claus doll and a boxing glove — were scattered in the debris.

At least 25 of the passengers were under the age of 18, the UIA said.

According to Ukraine, 82 Iranians, 63 Canadians, 10 Swedes, four Afghans, three Germans and three Britons were on board, as well as 11 Ukrainians — including nine crew.

About 30 came from the Iranian community around Edmonton, capital of Alberta province in western Canada, where resident Payman Parseyan described the tragedy as “devastating.”

“Every one of our community members was touched in one way or another,” Parseyan told Canada’s national broadcaster CBC.

The head of Iran’s civil aviation organisation, Ali Abedzadeh, said Iran would cooperate with Ukraine, but not send the black boxes to the US, with which it has no diplomatic relations.

Without naming Iran directly, US Secretary of State Mike Pompeo issued a statement calling for “complete cooperation with any investigation into the cause of the crash.”

According to aviation experts, only a handful of countries are capable of analysing black boxes — notably Britain, France, Germany and the United States.

Canadian Prime Minister Justin Trudeau said his government would ensure a “thorough investigation” and that “Canadians’ questions are answered”.

The country is home to a large Iranian diaspora, and UIA offers relatively inexpensive flights between Toronto and Tehran, with a layover in Kiev.

“About an hour ago, a Ukrainian Airlines plane just landed in Toronto from Kiev,” Trudeau said at a press conference. “According to the airline, there were 138 passengers who weren’t on that flight because they died in the crash on the earlier leg of their travel.”

The Edmonton victims included a couple of university professors and their two young girls, aged 9 and 14.

“Many of these people were international students,” said Parseyan. “They worked tirelessly to get to where they were, all to lose it like this.”

Siavash Ghafouri-Azar, 35, and Sara Mamani, 36, were coming home from their wedding in Iran, according to The Globe and Mail newspaper.

Hamed Esmaeilion, an Iranian-born dentist, told the paper he had been due to pick up his wife and nine-year-old daughter from the Toronto airport.

Instead he was heading to Tehran in search of answers after both perished in the crash.

It slammed into farmland at Khalaj Abad, in Shahriar county, about 45 kilometres (just under 30 miles) northwest of the airport, Iranian state media said.

A video aired by Iran’s state broadcaster appeared to show the plane already on fire as it fell.

The airline said the Boeing 737 had been built in 2016 and checked only two days before the accident. It was UIA’s first fatal crash.

“The plane was in working order,” company president Yevgeniy Dykhne told a briefing in Kiev where he choked back tears. “It was one of our best planes with a wonderful crew.”

Dozens of people gathered in the departure hall at Boryspil airport outside Kiev to pay their respects to the crew, five men and four women.

“There is a lot of speculation at the moment it has been shot down — I think that is not going to be the case at all,” said Stephen Wright, a professor of aircraft systems at Tampere University in Finland.

“It could be a bomb or it could be some sort of catastrophic breakup of the aircraft.”

Trudeau said he was unable to rule out foul play, but added: “It’s dangerous to speculate on possible causes.”

“However, we lost contact with it, suggesting that something very unusual happened,” he said.

The aircraft was not one of the MAX models fitted with anti-stall systems that have been linked with two other recent crashes of Boeing 737s.

Boeing said it was ready to help in any way needed.

Image: Iranian recovery teams inspect the wreckage of the Ukrainian airliner which crashed shortly after takeoff from Tehran with the loss of all 176 people on board (AFP Photo)