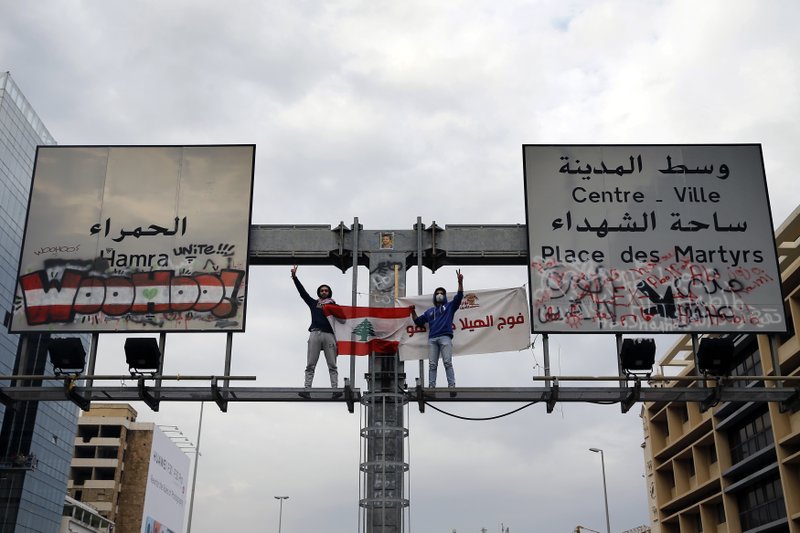 BEIRUT (AP) — A senior Hezbollah official warned Friday that Lebanon could fall into chaos and “complete collapse” unless a new government is formed.

Sheikh Ali Daamoush’s comments came amid more bickering between politicians on the formation of a new Cabinet amid a crippling financial crisis and ongoing mass protests against the country’s ruling elite.

Meanwhile, Britain announced that it classified the militant Hezbollah as a terrorist organization in a move that will freeze the group’s assets in Britain.

Prime Minister-designate Hassan Diab had been expected to announce an 18-member Cabinet on Friday, but last minute disputes among political factions scuttled his latest attempt.

Lebanon has been without a government since Prime Minister Saad Hariri resigned Oct. 29 amid nationwide protests against corruption and mismanagement by a political class that has been running the country since the end of the 1975-90 civil war.

Panic and anger gripped the public as they watched their local currency, pegged to the dollar for almost three decades, plummet, losing more than 60 percent of its value in recent weeks on the black market. Meanwhile, banks have imposed informal capital controls, limiting withdrawal of dollars and foreign transfers from the country.

The economy has worsened since mass protests began Oct. 17, turning violent in recent weeks as anger mounts. Earlier this week, protesters carried out acts of vandalism, targeting mostly banks. The eastern Bekaa Valley on Wednesday night witnessed sectarian attacks unseen in years. That raised alarm the political, economic, financial and social crisis could get out of control.

“We see that it is necessary to form a Cabinet as soon as possible because we know that the crisis which the country and people are suffering from cannot be solved without a Cabinet,” Daamoush said during the Friday prayers sermon.

“Losing the opportunity to form a government now means that the country is headed into chaos, disorder and total collapse,” Daamoush warned.

Following a meeting between Diab and the parliament speaker on Thursday, news spread that the new government with 18 ministers will most likely be announced Friday.

But a person taking part in negotiations for the government formation told The Associated Press on Friday “there are some problems” they are trying to solve. He said some political groups are insisting the government be made up of 24 ministers to have more representation, while Diab is insisting on 18.

The person spoke on condition of anonymity because he was not authorized to speak to the media.

Protesters have already rejected the new Cabinet saying that although it is going to be made up of experts, the ministers are named by the political groups they blame for Lebanon’s problems. The protest movement is insisting that the government be made of independent technocrats.

In Britain on Friday, the country’s Treasury announced on its website it had designated Hezbollah a terrorist organization. The move will freeze the group’s assets in Britain. Last year, the UK named the military wing of the Iran-backed organization a terrorist group, accusing it of destabilizing the Middle East.

“Hezbollah itself has publicly denied a distinction between its military and political wings,” the Treasury said.

The European Union put the armed wing of Hezbollah on its terrorism blacklist in 2013, due to Hezbollah’s alleged role in blowing up an Israeli tour bus in Bulgaria. But unlike the United States, European countries had until now differentiated between the group’s military and political wings.

Britain’s ambassador to Lebanon, Chris Rampling, briefed Minister of State for Presidential Affairs Salim Jreissati in Beirut about the move against Hezbollah that went into effect Friday.

Image: Anti-government protesters stand atop a road sign and flash the victory sign as others block a main highway in Beirut, Lebanon, Friday, Jan. 17, 2020. Protesters closed major roads in the capital Beirut and around wide parts of Lebanon paralyzing the country as the political crisis over the formation of a new government worsens. (AP Photo/Bilal Hussein)