Doctors in Syria’s rebel-controlled suburbs of Damascus said Wednesday they were unable to keep up with the staggering number of casualties, amid a ferocious bombing campaign by government forces that has targeted hospitals, apartment blocks and other civilian sites, killing and wounding hundreds of people in recent days.

The bombardment has forced many among the nearly 400,000 residents to sleep in basements and makeshift shelters, and has overwhelmed rescue workers who have spent days digging out survivors from the wreckage of bombed out buildings.

UN Secretary-General Antonio Guterres called for an immediate suspension of “all war activities” in the rebel-held Damascus suburbs known as eastern Ghouta where he said 400,000 people are living “in hell on earth.”

The UN chief said a suspension of fighting must allow for humanitarian aid to reach all in need and the evacuation of some 700 people needing urgent medical treatment.

Dr. Waleed Awata described a desperate, chaotic scene at the small hospital where he works as an anesthesiologist in the town of Zamalka, one of a cluster of settlements that make up eastern Ghouta. The facility, with just 17 beds, received 82 patients on Tuesday night alone, he said.

“We had to give them IVs and treat them on the floor,” the 44-year-old physician told The Associated Press. He said the bodies of two women and two children killed in Wednesday’s shelling were also brought to the hospital.

The hospital was struck Tuesday by barrel bombs — crude, explosives-filled oil drums dropped from helicopters at high altitudes — as well as sporadic artillery fire, Awata said. Like many hospitals in the area, patients had been moved into the basement to shield them from airstrikes. No one was hurt but the hospital’s generator, water tanks and several ambulances were damaged.

Another doctor said he, too, was as the hospital where he works in the town of Saqba when it came under attack Tuesday, killing some of the patients and forcing others to be moved to nearby homes because the airstrikes made it too dangerous to take them to other hospitals.

“By God, I am exhausted in every sense of the word,” said the physician, who spoke on condition of anonymity because he feared for the safety of relatives in government-controlled areas of Damascus.

The international medical organization Doctors Without Borders said 13 hospitals and clinics that it supports have been damaged or destroyed over the past three days. The International Committee of the Red Cross called for immediate access to tend to the wounded, saying medical personnel in the rebel-held areas were unable to cope amid shortages of medicines and supplies.

Syrian government forces supported by Russian aircraft have shown no signs of letting up their aerial and artillery assault on eastern Ghouta since they stepped up strikes late Sunday as part of a new, determined push to recapture the territory that has been controlled by rebels since 2012.

The UN human rights office said in a statement Wednesday that at least 346 people had been killed in eastern Ghouta since the Syrian government and its allies escalated their offensive on the region on February 4. At least 92 of those deaths occurred in just one 13-hour period on Monday, it said, adding that the toll was far from comprehensive, documented in the midst of chaos and destruction. Another 878 people have been wounded, mostly in airstrikes hitting residential areas.

The Britain-based Syrian Observatory for Human Rights, which closely monitors the fighting through activists on the ground, said at least 300 people have been killed since Sunday night alone. The dead included 10 people killed in a new wave of strikes Wednesday on the town of Kafr Batna.

Photos and video posted by the Syrian Civil Defense and local activist groups showed scenes resembling the aftermath of an earthquake in Kafr Batna and rescuers searching the rubble for survivors. In one video, workers were seen carrying away a man, his hair and clothes covered in dust and debris, blood running down his face. Sirens wailed in the background and people screamed in panic. Photos showed children being treated for wounds at a hospital and bodies shrouded in white lined up alongside makeshift graves.

The doctor in Saqba said he had returned home Tuesday to rest after two back-to-back days of treating the wounded when a barrage of rockets landed in his neighborhood, shaking his apartment and breaking the windows.

Minutes later, the airstrikes began. The first one hit his house, the doctor said, adding that he couldn’t see anything through the dust as he called out to his pregnant wife and two young children, ages 2 and 1. Neighbors came to their rescue and helped them evacuate to the basement, where they spent the night. They suffered only superficial wounds.

“I’m one of the fortunate ones. I know that not everyone in my place in Ghouta would have been so lucky,” he said.

The UN’s regional humanitarian coordinator for Syria, Panos Moumtzis, said he was “alarmed” by the very high number of casualties.

“Ghouta is a 10-mile drive from the hospitals in Damascus and it’s heartbreaking to think of children, women, and elderly who are in need, unable to be evacuated, and in a situation of fear, hiding in basements and not being able to go out,” he said by phone from Amman, Jordan.

Paul Donohoe, the Beirut-based media officer for International Rescue Committee, said his group supports five medical facilities in eastern Ghouta that, because of the severity of the bombardment, were only able to treat the most urgent cases. He said more than 700 people, including some with chronic illnesses that need urgent medical evacuation, were trapped.

“People are terrified. … We need a cease-fire immediately because of the horrible, horrendous number of people who have died so far,” he said.

The Russian military is again supporting Assad’s forces as it did in the all-out assault on the rebel-held half of Syria’s largest city, Aleppo, in late 2016, which drove the rebels from their enclave there. Tens of thousands of civilians were forced to flee their homes, and many have been unable to return. Hundreds more were killed in indiscriminate shelling and bombardment. A subsequent UN investigation charged that the campaign amounted to forced displacement of a population and rose to the level of a war crime.

Russian Foreign Minister Sergey Lavrov said earlier this week that the assault on Aleppo could serve as a model for the military campaign in eastern Ghouta, which he said was necessary to uproot al-Qaida-linked militants from the area.

On Wednesday, Russian President Vladimir Putin’s spokesman, Dmitry Peskov, rejected allegations from the US and others that the Russian military shares responsibility, along with Assad’s forces, for civilian casualties in eastern Ghouta, calling such claims “unfounded.” 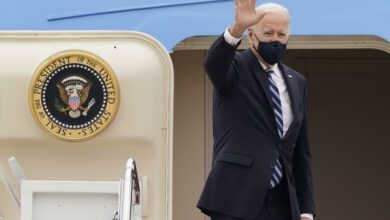