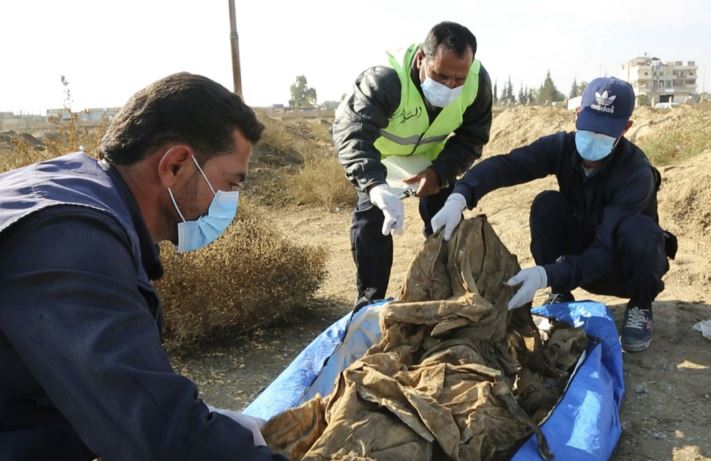 BEIRUT (AP) — Syrian workers have exhumed more than 500 bodies from one of the largest mass graves near the northern city of Raqqa, once the capital of the Islamic State group’s self-styled caliphate, and are still uncovering remains, a local official said Tuesday.

The exhumation of mass graves in and around Raqqa is being undertaken by local groups and first responders amid concerns about the preservation of bodies and evidence for possible war crimes trials.

“We’re in a race against time. These bodies are decomposing at an exponential rate,” said Sara Kayyali, of Human Rights Watch.

A devastating US-backed air and ground campaign drove IS from Raqqa more than a year ago, but rescuers and recovery teams continue to locate mass graves in and around the city. At least nine graves have been found in and around Raqqa, and the bodies that have been recovered are a mix of victims of US-led coalition airstrikes, IS fighters and civilians.

The Panorama mass grave, named after the neighborhood where it was found, is one of the largest of nine mass graves discovered so far, and is believed to contain around 1,500 bodies. Hammoud al-Shawakh, a local official involved in the work, said 516 bodies believed to be of Islamic State fighters and civilians have been exhumed.

The work is pain-staking and the task is huge. A team of Raqqa-based first responders and a forensic doctor carefully shovel dirt to search for the bodies, which are believed to have been buried there in the last days of the four-month campaign to liberate Raqqa.

Abdul Raouf al-Ahmad, the deputy forensic doctor, said local teams start their work at 8 a.m. and work for more than seven hours straight each day digging through neatly formed trenches in the grave.

“After we extract the bodies from this grave… we document whether it belongs to a fighter, child, baby, an adolescent or woman or an ordinary person,” he said. “We document clothing, ornaments, height, type of injury, cause of death and how it was covered, what the person was wearing, with what it was wrapped and its position in the grave,” he added.

International human rights groups say they are concerned that local groups are not getting the support they need in terms of forensic expertise and human resources.

“If these bodies are not preserved in the correct way, in the way that’s been established, then it does mean that much of this evidence might be lost when we’re seeking accountability for crimes committed either in the context of the battle or before it,” Kayyali said.

Turkey uneasy about US plan for observation posts on Syria border: minister