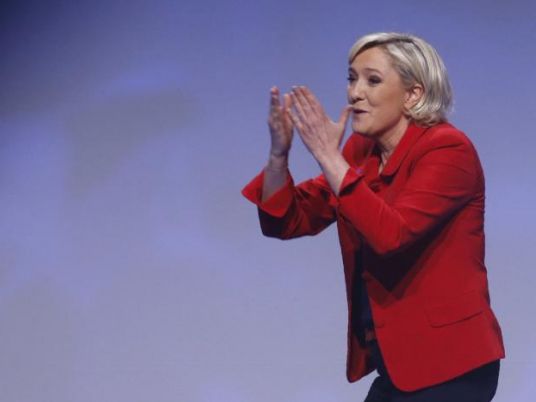 Far-right leader Marine Le Pen on Monday sought to mobilize her supporters six days ahead of France's most unpredictable presidential election in decades, by pledging to suspend all immigration and shield voters from "savage globalisation."

Opinion polls have for months shown Le Pen and centrist Emmanuel Macron qualifying next Sunday for the May 7 run-off, but the gap with conservative Francois Fillon and far-leftist Jean-Luc Melenchon has been tightening.

"I will protect you. My first measure as president will be to reinstate France's borders," Le Pen said to wide applause and cheers from the crowd of about 5,000, prompting the National Front's (FN) traditional "This is our home!" chant. 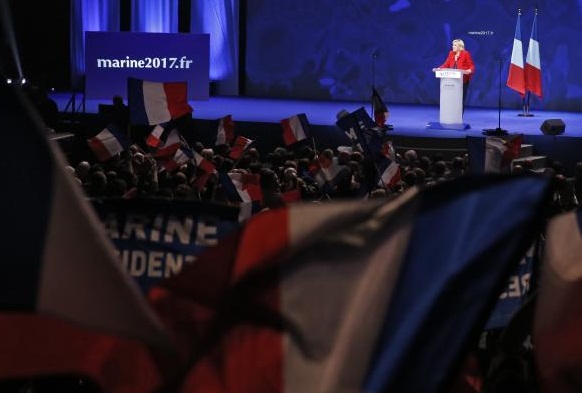 While no polls have shown Le Pen missing out on the run-off, they are now within the margin of error and any two of the four top candidates have a shot at qualifying. Polls have consistently shown her losing that second round.

With pollsters saying abstentions could hit record highs, convincing voters to go to the polling stations on Sunday is key. Le Pen sought to do so by hitting her party's trademark anti-EU, anti-immigration themes hard.

"Fight for victory, until the very last minute," she said. "If every patriot can this week convince just one abstentionist, just one undecided voter, we are sure to win!"

Getting the crowd to boo the European Union and its border-free Schengen area that she would take France out of if elected, Le Pen said: "Mass immigration is not an opportunity for France, it's a tragedy for France." Promising to immediately impose a moratorium on immigration, she said: "The French sometimes have fewer rights than foreigners – even illegal ones."

Scuffles briefly broke out between 60 to 80 anti-FN protesters and police near the Zenith concert hall in north-east Paris ahead of the rally, a Reuters photographer said.

Police fired teargas at the protesters, some of whom threw chunks of wood. The protesters then left, followed by a small group of police. 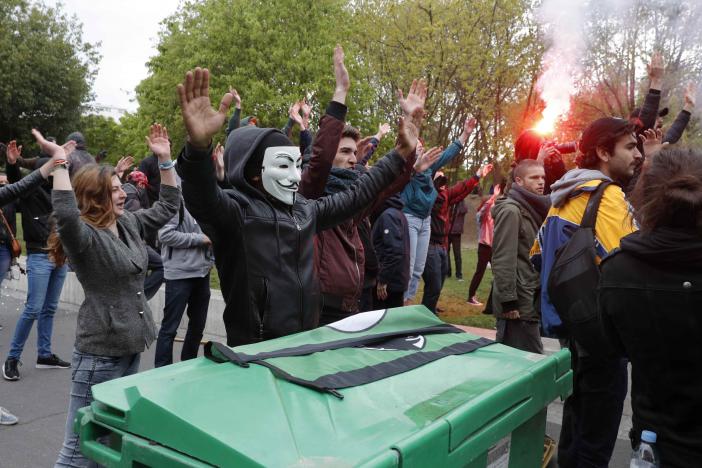 During Le Pen's speech, one young woman jumped on the stage and was immediately carried away by security and a topless woman later shouted out from the middle of the concert hall in an apparent protest against the candidate.

FN lawmaker Gilbert Collard told reporters on arriving at the hall that he was hit in the neck by a beer bottle and that other objects were aimed at him before police intervened. Another FN official, Jean Messiha, said he saw a couple of Molotov cocktails being thrown. Reuters could not verify either comment.

A few hours earlier on the other side of Paris, Le Pen's most likely run-off opponent, Macron, addressed a crowd nearly four times larger in another concert hall and struck a starkly different, pro-European tone. But Le Pen's supporters dismissed her opponent and his ideas.

"Macron is a pure marketing product," said 26 year-old Veronique Fornilli, an FN youth activist in the Paris region. "Only Le Pen can put France back in order," she said, also praising the FN leader for her anti-EU, anti-euro stance.

"I want to give France its freedom back, I want to take it out of jail," Le Pen said of her plans to pull the country out of the euro.