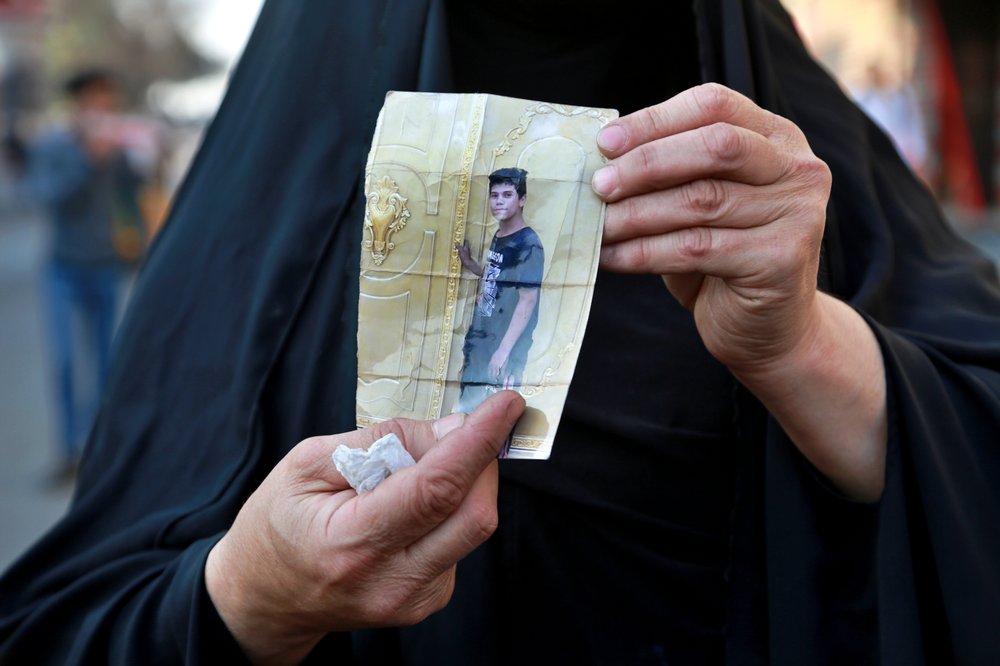 BAGHDAD (AP) — In the span of 30 seconds, Ali Jasb, a young rights lawyer, vanished into the night in southern Iraq.

On an evening a year ago, a woman emerged from a dimly lit street in the city of Amara, her face hidden in a black abaya, and greeted Jasb. Almost immediately a black SUV pulled up, two men forced him in and sped away. The woman climbed into a waiting pickup truck and left.

That last sighting of the 21-year-old Jasb was captured by a surveillance camera at 6:22 pm on October eight, 2019. Nothing has been heard from him or his captors.

Ever since, Jasb’s father has been on a search for justice that has run repeatedly against one major obstacle: the increasing helplessness of Iraq’s government in the face of powerful, Iranian-backed Shia militias.

Jasb was abducted a week into historic protests which erupted across Iraq and saw tens of thousands of youth rallying against corruption and the ruling class. Like many others, hopes for change inspired by the movement emboldened Jasb to speak out against militias in his hometown.

Now Jasb is among 53 protesters who remain missing since the movement began on Oct. 1, according to the semi-official Iraqi High Commission for Human Rights.

The protests have largely been silenced by a combination of the coronavirus and a violent crackdown by security forces and militias that, according to the commission, killed more than 500 people.

Within that crackdown, militias are widely believed to have waged a campaign of terror, abducting dozens of prominent activists and assassinating more than 60.

In Jasb’s case, judicial investigations seen by The Associated Press show a connection between his abduction and the most powerful militia in his home city, Amara.

His father, Jasb Aboud, is determined to bring its commander to trial.

“I am afraid,” he told the AP. “But I lost what was most valuable to me, so I’ve got nothing else to lose.”

Jasb exemplified the generation of hopeful activists who fueled the protest movement.

He threw himself into using the law to help people in Amara, a small city flanked by marshes on the Tigris River that is the capital of Missan province.

He married young and soon had a daughter, now 2. He often represented women trying to divorce abusive husbands. He was angered by the state’s failures, noting how his family still dug wells for water and relied on expensive generators for electricity.

When the protests erupted, Jasb participated and formed a legal committee to help those detained.

And he openly criticized the power of militias.

In Missan province, that meant Ansar Allah al-Awfia, one of the more extreme pro-Iranian militias. It was incorporated under the state-sponsored umbrella group, the Popular Mobilization Forces, created to fight the Islamic State group in 2014.

Over the years, it came to control important government offices and many businesses in Missan. Its loyalists won two of the province’s 10 parliament seats. Notorious for illicit dealings, it milked major revenue from border trade from Iran.

There was no response to repeated emails by the AP to the PMF seeking comment for this story, and calls and messages to al-Awfia were not answered.

When Jasb started getting threats, his father pleaded with him to stop criticizing the militia online.

“I can’t be silent,” Jasb replied.

His peers believe his last case may have sealed his fate. He was helping the wife of a militiaman get a divorce, said his friend Akeel Auki, who heads the Missan lawyer’s union.

Any lawyer pursuing a case against a militia member will be “surrounded by threats,” Auki said. “I’ve received a lot of them.”

On Oct. 7, Jasb’s second child, a son, was born. The next day, he got a call: A woman seeking legal help asked to meet that evening on a street a few minutes’ drive away.

The surveillance camera later revealed what happened next.

The protest movement scored an early victory, forcing out Prime Minister Adel Abdul-Mahdi. His successor, Mustafa al-Kadhimi, branded himself as a champion of the protesters.

But he was soon faced with the limits of his own administration. Abdul-Mahdi had allowed militias’ power to grow so much that “now, we almost don’t have a state,” said a high-level official, speaking on condition of anonymity because of the sensitivity of the issue.

Frequent rocket attacks targeted al-Kadhimi’s seat of power in Baghdad, straining relations with the US. A raid on the Iranian-backed Kataib Hezbollah, suspected of firing the rockets, backfired when most of those detained were set free — lack of evidence, the court said.

Militias blocked attempts to increase customs revenues, which would have cut funds they skim from cross-border trade, and militia corruption wrecked a program to boost agricultural exports, multiple officials said.

A fact-finding committee produced an official number killed during the protests but didn’t name the killers.

The government had already inherited an economic crisis and an overwhelmed health system — “if we name the killers, we will drown,” a senior adviser to al-Kadhimi said on condition of anonymity to speak freely.

Activists continue to be targeted.

The July shooting death of a high-profile commentator and critic of Iran, Hisham al-Hashimi, sent shockwaves across Baghdad. Two leading activists in Basra were assassinated.

“If the government can’t deliver justice to someone like al-Hashimi, then who is Ali Jasb to them?” said Hasab Wahab of the al-Amel Association rights group.

On July 14, Jasb’s father Aboud met with a new lawyer in Baghdad. The investigation by a Missan judge into his son’s abduction had been stalled for nine long months.

They believed they knew why: Evidence had revealed a link to the commander of the al-Awfia militia, Haidar al-Gharawi.

“The accused is a militia that has power in Missan, so it could be that it has influence over witnesses, even the law,” said the lawyer, Wala al-Ameri.

Aboud and al-Ameri considered a bold gambit: Move the case to a hopefully more independent Baghdad court and request an arrest warrant against al-Gharawi.

The two men sat and reviewed the facts of the case.

According to the surveillance footage, Jasb’s kidnappers drove a Chevrolet Tahoe and Toyota pickup, which had dark-tinted windows — banned under Iraqi law — and no license plates. Little was done to track down the vehicles.

Key to the case was the mobile number that had called Jasb.

Investigators found it belonged to an illegally acquired SIM not registered with the authorities. There is a thriving black market for unregistered SIMs, which cannot be traced to a user.

On a recent visit to a Baghdad commercial center, one dealer said the SIMs were smuggled from the northern city of Irbil. He offered one for 75,000 Iraqi dinars, about $63, then added: “But after … you’ve never met me.”

Police tracked down other numbers that had called the unknown SIM. Among them was a man named Saddam Hamed.

Hamed told investigators he had had no idea about the unknown number. But he said his wife, Fatima Saeed, sometimes used his phone to call a relative. That relative is married to al-Gharawi, according to his testimony.

The judge summoned Saeed for questioning but she never showed up. Both she and Hamed had fled.

Here, Aboud asked his lawyer: “Do you think we have enough evidence?”

Silence. The gazes of both men fell on half-drunk teacups. They decided to try.

Testimony from others kidnapped by suspected militias provide clues into what Jasb may have endured.

One young activist in the southern city of Karbala, who asked to be identified only by his first name, Kadhim, told AP that in December he and four friends were rounded up by gunmen near Baghdad’s Tahrir Square, the epicenter of the protests. They were taken blindfolded to an unknown location.

For four days, they were beaten and interrogated. The captors accused them of an arson attack on the Iranian Consulate in Karbala and of taking money from the Americans, according to Kadhim’s account, corroborated by two other activists too fearful to speak on record.

“I’ll find what you’re hiding under your skin,” the interrogator said. Kadhim said his legs were electrocuted. His body felt like it was being ripped open.

Online threats prompted many leading activists to flee to Turkey, according to two rights watchers and two activists currently in Istanbul.

One who left for Turkey in February said he had received messages from an unknown number.

One read: “We know where you live.”

During the 15-minute meeting held in the compound of a Chinese oil giant, Aboud laid out the court documents. He named the militia he believed took his son.

Al-Kadhimi was shocked, Aboud said. “He put his hand to his chest and promised he would deliver him to me.”

The prime minister may be the bereaved father’s last hope after he hit another dead end.

The Baghdad judge deemed there was insufficient evidence for an arrest warrant against al-Gharawi. He dismissed Hamed’s testimony, saying only testimony from someone who saw the kidnapping could advance the case.

“Now it’s a case against the unknown,” Aboud said.

There are witnesses. None dare speak out.

One man told the AP he saw everything from a nearby shop. He spoke on condition of anonymity out of fear.

He recounted seeing the woman emerge and the men push Jasb into the vehicle. He saw police afterward search Jasb’s car. The AP confirmed the shop had a view on the site.

But would he testify?

“It would be my funeral the next day.”

Image: A woman holds a picture of her a missing son during anti-government protest in Baghdad, Iraq, Sunday, Feb. 23, 2020. There are 25 activists still missing since the protests erupted on Oct. 1, 2019, according to the semi-official Iraqi High Commission for Human Rights. No group has claimed responsibility but activists have blamed the militias. (AP Photo/Khalid Mohammed)

In sign of frustration, US shortens sanctions waiver to Iraq