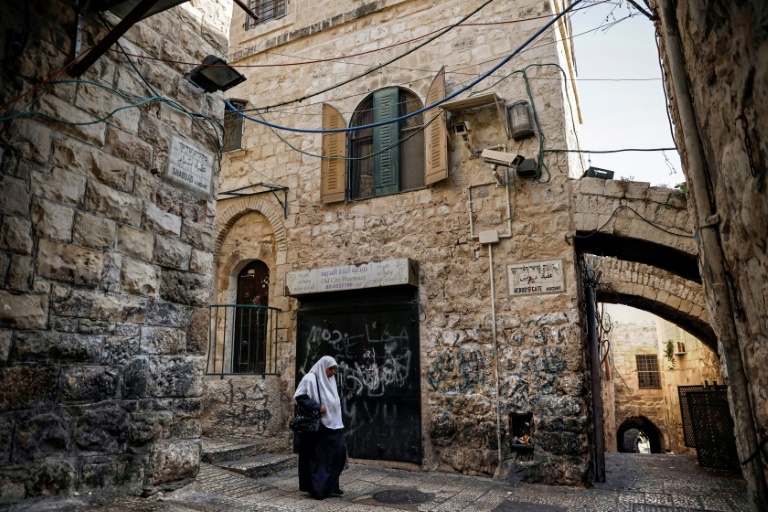 In an alley in Jerusalem’s Old City, a three-story building has become a symbol of Palestinian fears they are losing precious ground in the historic area.

Adeeb Joudeh al-Husseini says he did nothing wrong, but even his status as a member of one of Jerusalem’s most prominent Palestinian families did not shield him from the blowback.

The 55-year-old was accused of being behind the sale of the Mamluk-style building in the Old City’s Muslim quarter to Israeli settlers — something most Palestinians consider treason.

“Can we be held accountable for something that was sold over two years ago?” he asks as he sits at the entrance to the Church of the Holy Sepulchre, built at the spot where Christians believe Jesus was crucified and buried.

Joudeh, as his family is known, is one of the keepers of the keys of the church and has faced calls to relinquish that role over the sale.

He proudly brandishes the long, arrow-shaped key — which the Muslim family says it has handed down from father to son since the 13th century — as proof of his innocence.

Joudeh says he sold the property to another Palestinian in 2016 for $2.5 million and cannot be held responsible if it was passed on to settlers, who moved there in late 2018.

But the building he once owned is not the only one triggering Palestinian concerns.

The land conflict between Palestinians and Israelis is also a battle over Jerusalem and its Old City, home to sites holy to Jews, Muslims and Christians.

Israel took over mainly Palestinian east Jerusalem in the 1967 Six-Day War and later annexed it in a move never recognized by the international community.

It now considers the entire city its capital, citing the Jewish historical and biblical connection there.

The Palestinians see east Jerusalem, which includes the Old City, as the capital of their future state.

They consider each property sale to Israeli settlers there as another blow to their cause.

Some 320,000 Palestinians live in east Jerusalem, while the Israeli settler population there has now grown to 210,000.

Israel bars the Palestinian Authority from operating in Jerusalem, but it seeks to maintain influence, however limited.

Such sales can in theory carry the death penalty under PA law.

In one high-profile case in recent weeks, an American-Palestinian man, Issam Akel, was sentenced to life in prison by a PA court in the occupied West Bank over a property sale in the Old City.

Akel’s lawyer, Oday Nawfel, said he was simply trying to help another Palestinian family sort out inheritance issues with the building, down the street from the one Joudeh sold.

Akel’s case has drawn criticism from David Friedman, the US ambassador to Israel, who has been a supporter of settlements and has called for Akel’s release.

It also led to calls in Israel for authorities there to act.

Following Akel’s arrest, Israel detained the Palestinian governor of Jerusalem a number of times over suspicions of involvement in the affair.

Another 32 Palestinians were arrested by Israeli forces on similar grounds that they were supporting the PA in the matter, but eventually all were released.

Akel was reported to have been released this past week on condition he leave for the US, though neither his lawyer or the US embassy confirmed the deal.

In a separate case in November, the highest Muslim authority in Jerusalem, Grand Mufti Muhammad Ahmad Hussein, refused to allow a Palestinian killed in a car accident to be buried in a Muslim cemetery over suspicions he had once sold property to Jews.

Israeli settler groups push to make deals happen as part of their efforts to increase the Jewish population in east Jerusalem, sometimes offering exorbitant sums to pressure owners to sell.

The groups use a variety of means such as middlemen or shell companies, anti-settlement activists say.

“These are not open, transparent transactions,” said Yudith Oppenheimer, who heads Ir Amim, an Israeli anti-settlement NGO focused on Jerusalem.

Daniel Luria of Ateret Cohanim, which works to increase the Jewish population of east Jerusalem, defended its actions.

“Everyone should be able to buy and sell” in areas under Israeli sovereignty, said Luria.

Joudeh displays documents that he says show the PA validated the sale of his home to another Palestinian.

He says the buyer “betrayed me, betrayed the Palestinian Authority and Palestine”.

The Palestinian who in 2016 bought the house, Khaled al-Atari, refused to speak with AFP citing an ongoing investigation on the Palestinian side.

Regardless of who was responsible, neighbors fear more such sales are ahead.