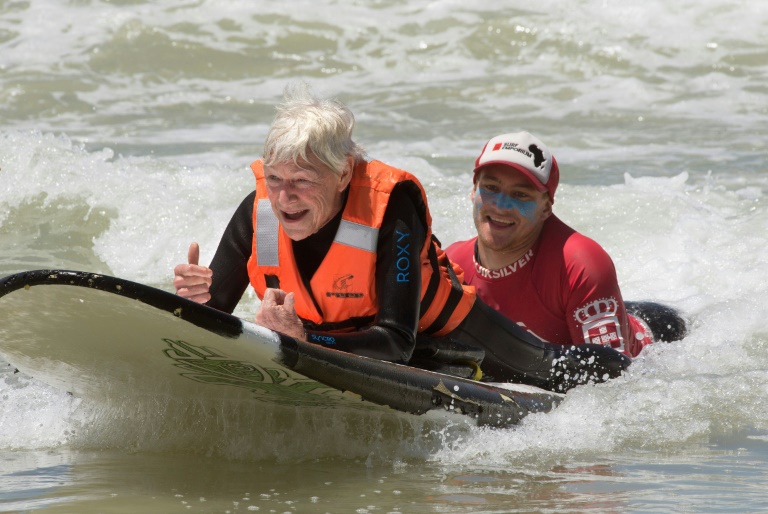 Pamela Hansford whooped and threw out a thumbs-up as she glided past on a surfboard, propped up by her elbows.

A year ago, a steep wave slammed the intrepid 75-year-old into the shore at a Cape Town beach, breaking her neck.

Now, a crowd of volunteers and coaches cheered her on before moving in to turn her board around and push it back out to catch the next wave.

“It’s wonderful,” Hansford said. “To be in the water and to feel the movement again, it’s really special.”

On the beach, South African surf champion Roxy Davis briefed the next group of volunteers.

Since 2016, Davis’s surf school Surf Emporium has been hosting training clinics to introduce people with both physical and mental disabilities to the thrill of catching a wave.

“Whether you are an able-bodied surfer or somebody with a disability, whether it’s your tenth time surfing or your very first, that joy and that stoke (thrill) is the same,” she said.

“It gives me the same goosebumps watching each wave at each session.”

People with disabilities have been surfing for decades, but it wasn’t until the International Surfing Association started the first adaptive surfing world championship in 2015 that the sport began building momentum.

After a car accident when he was five years old left Smyth’s right arm paralysed, doctors suggested he take up surfing — the paddling, they said, would encourage him to use both arms.

“I never did paddle with two hands, ever,” Smyth said. On his bedroom wall was a poster of legendary South African surfer and 1977 world champion Shaun Tomson.

“I would surf on the end of my bed looking at that picture,” remembered Smyth, now 48. “I would kneel down and pray, ‘I want to be a world champion like Shaun Tomson’.”

At that first adaptive world championship, Smyth took silver in his division. At the most recent event in December last year, he won gold.

“The quality of surfers has increased every year,” Smyth said. “The event in 2015 was all happy — like a meet-and-greet with a surfing competition on the side. It was more focused towards learning.

“This time it was ‘let’s win this’. In the water, it got quite fierce.”

Now a technical advisor to national body Surf South Africa, Smyth aims to increase the number of adaptive surfers — not only showing people with disabilities that surfing is possible, but making it practically accessible to them.

“If we do our job right and get people into the surf often and regularly, you will find talented people who have the drive to compete,” he said.

Teaming up with Surf Emporium’s clinics helped give the project some structure.

“We’re training coaches and we have equipment on tap and we have the skills and the premises to let adaptive surfers come surfing whenever they want,” Smyth said.

For Davis, the learning curve going from surf school to adaptive surf school has been steep.

“I’ve been surfing for about 22 years. I feel like I know a lot about surfing, but actually understanding different disabilities and how to put people on a board to facilitate their disability — it’s been really incredible,” she said.

Mental disabilities are not currently recognized in any of the official categories of competitive adaptive surfing, but Davis has an all-inclusive approach at her clinics.

Back at the beach, the coaches showed Chloe Murdoch how to position her autistic son Finn on a board.

Murdoch was concerned — the waves seemed a bit too big, a bit too strong. But within minutes, her nine-year-old was cruising along unassisted, lying down on the board.

“With surfing, you’re not chasing any educational targets or goals, you’re not trying to meet any performance, you’re just enjoying your child,” Murdoch said. “We get so little opportunity with special needs children to be able to do that.”

“We felt like we were flying – it was amazing.”

Special needs students get educational hall at Ain Shams U.