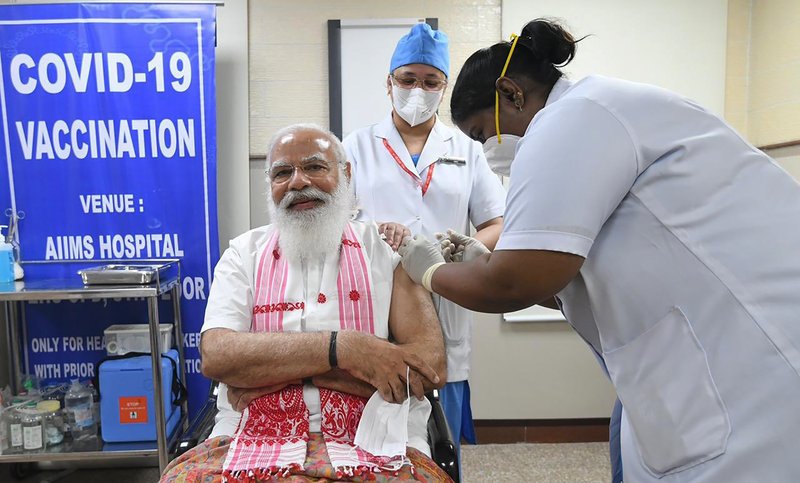 NEW DELHI (AP) — India is expanding its COVID-19 vaccination drive beyond health care and front-line workers, offering the shots to older people and those with medical conditions that put them at risk. Among the first to be inoculated on Monday was Prime Minister Narendra Modi.

Those now eligible to be vaccinated include people older than 60, as well as those over 45 who have ailments such as heart disease or diabetes that make them vulnerable to serious COVID-19 illness. The shots will be given for free at government hospitals and will also be sold at over 10,000 private hospitals at a fixed price of 250 rupees, or $3.40, per shot.

Modi, who is 70, got the shot at New Delhi’s All India Institute of Medical Science. He appealed for all to get vaccinated, tweeting afterward, “together, let us make India COVID-19 free!”

The country of nearly 1.4 billion people started one of the world’s largest vaccination drives in January, but the rollout has been sluggish.

New coronavirus infections are increasing again after months of consistent decline, and scientists have detected worrisome variants of the virus that they fear could hasten infections or render vaccines or treatments less useful. Vaccinating more people is a priority, with India’s Health Ministry on Sunday urging states “not to lower their guard” and “squander away the gains of the collective hard work of the last year.”

India has recorded more than 11 million cases, second in the world behind the United States, with over 157,000 deaths in the country from COVID-19.

Even though India is home to the world’s largest vaccine makers and has one of the biggest immunization programs, things haven’t gone according to plan. Of the 10 million health care workers that the government had initially wanted to immunize, only 6.6 million have gotten the first shot and 2.4 million have gotten both. Of its estimated 20 million front-line workers like police or sanitation workers, only 5.1 million have been vaccinated so far.

Dr. Gagangdeep Kang, an infectious diseases expert at Christian Medical College Vellore in southern India, said the hesitancy by health workers to be vaccinated highlights the paucity of information available about the vaccines. If health workers are reticent, “you seriously think that the common public is going to walk up for the vaccine?” she said.

India had set a target of immunizing 300 million people, nearly the total U.S. population, by August.

The spike in infections in India is most pronounced in the western state of Maharashtra, where the number of active cases has nearly doubled to over 68,000 in the past two weeks. Lockdowns and other restrictions have been reimposed in some areas, and the state’s chief minister, Uddhav Thackeray, has warned that another wave of cases is “knocking on our door.”

Similar surges have been reported from states in all corners of the massive country: Punjab, Jammu and Kashmir in the north, Gujarat in the west, West Bengal in the east, Madhya Pradesh and Chhattisgarh in central India, and Telangana in the south.

Top federal officials have asked authorities in those states to increase the speed of vaccinations in districts where cases are surging, and to track clusters of infections and monitor variants.

“There is a sense of urgency because of the mutants and because cases are going up,” said Dr. K. Srinath Reddy, president of the Public Health Foundation of India.

He said that the consistent dip in cases over months resulted in a “reduced threat perception,” leading to vaccine hesitancy. Experts point out that the reticence to get vaccinated was amplified, at least in part, by the government’s opaque decision making while green-lighting vaccines. “The (vaccination) drive began when perception was that the worst was over, so people were more hesitant,” Reddy said.

India’s health care system is patchy, and in many small cities people depend on private hospitals for their medical needs. Allowing these hospitals to vaccinate will open up access to the shots, experts said. India had rolled out online software to keep track of the shots and recipients, but the system was prone to glitches and delays.

What is still not clear, though, is whether people will get a choice between the AstraZeneca vaccine or one from Indian vaccine maker Bharat Biotech. The latter got the go-ahead by Indian regulators in January without any evidence from late trials that showed that the shots were effective in preventing illness from a coronavirus infection.

The priority for now is to increase the number of vaccines every day, said Jishnu Das, a health economist at Georgetown University who advises West Bengal state on the pandemic. But he added that with COVID-19, there are always troughs and peaks, and the key lesson is that it won’t end until enough people have been vaccinated for the spread of the virus to slow.

“Don’t use a trough to declare success and say it’s over,” he said.

Image: In this photo provided by Prime Minister of India Narendra Modi’s twitter handle, Indian Prime Minister Narendra Modi is administered a COVID-19 vaccine in New Delhi, India, Monday, March 1, 2021. India is expanding its COVID-19 vaccination drive beyond health care and front-line workers, offering the shots to older people and those with medical conditions that put them at risk. As of Monday, those eligible to be vaccinated include people over 60, as well as those over 45 who have ailments such as heart disease or diabetes that make them vulnerable to the coronavirus. (Prime Minister of India Narendra Modi’s twitter handle via AP Photo)

Unwilling to wait, poorer countries seek their own vaccines