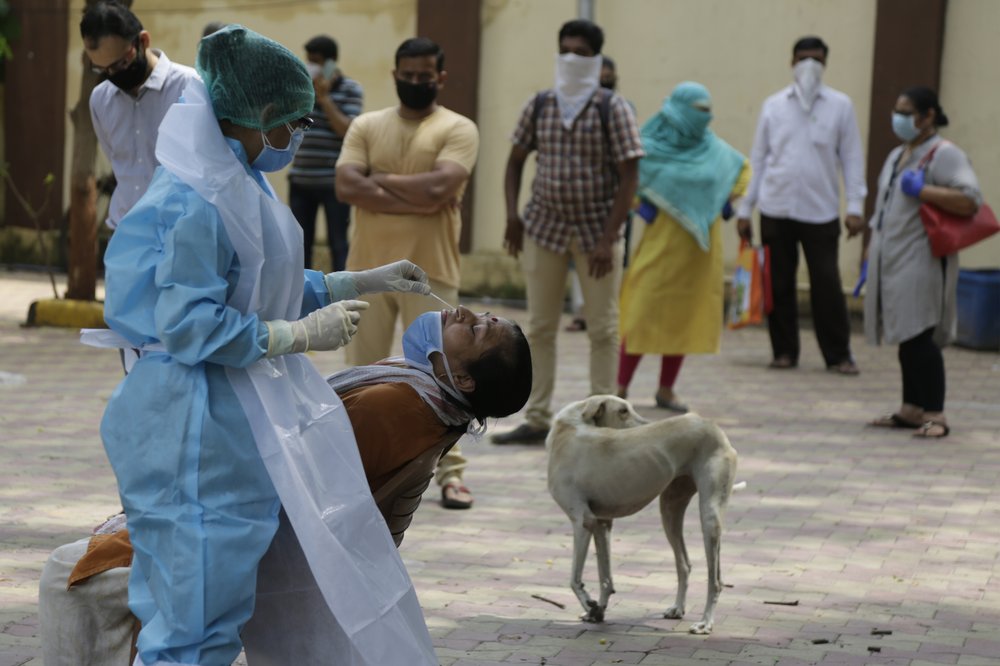 NEW DELHI (AP) — India’s virus cases surged another 32,695 as of Thursday, taking the nation closer to one million and forcing a new lockdown in the popular western beach state of Goa two weeks after it was reopened to tourists.

The new confirmed cases took the national total to 968,876. The Health Ministry also reported a record number of 606 deaths in the past 24 hours, taking total fatalities up to 24,915.

The actual numbers, like elsewhere in the world, are thought to be far higher due to a number of reasons including limited testing.

The Indian Medical Association, a voluntary organization of Indian doctors, said 99 doctors have died and another 1,302 are infected with the coronavirus. It called for shortening of working hours for health workers following safety concerns.

It also said the fatality rate among doctors was 7.6 percent, much high than the national average of about 2.5 percent.

About a dozen states, including Maharashtra, Tamil Nadu, West Bengal and Assam, have put high-risk areas under lockdowns, only allowing essential food supplies and health services.

He said people were flouting social distancing norms. Nearly 40,000 people were fined 100 rupees (US$1.3) each in the past two weeks for not wearing masks.

A two-week lockdown also started Thursday in the eastern state of Bihar, with a population of 128 million and a fragile health system. Bihar is reporting over 1,000 cases a day despite limited testing.

The initial boost that India’s economy received in June after the nationwide lockdown was relaxed is being jeopardized by the localized lockdowns in high-risk areas, experts say.

India’s minister for small and medium businesses, Nitin Gadkari, said last week that experts were predicting a loss of $133.3 billion in the next year.

The Health Ministry said the recovery rate has climbed to 63.24 percent and the increase in recovered cases is driven by aggressive testing, timely diagnosis and effective management of patients either through supervised home isolation or hospital care.

It also said that India followed WHO guidelines of 140 tests per day per one million people.

Dr. Ashish Jha, director of the Harvard Global Health Institute, said that with new cases accelerating, India’s strategy must focus on keeping numbers as low as possible and saving as many lives as it can.

Image: A health worker takes a nasal swab sample of a woman at an urban health center in Ahmedabad, India, Thursday, July 16, 2020. India’s virus cases surged another 32,695 as of Thursday, taking the nation closer to one million and forcing a new lockdown in the popular western beach state of Goa two weeks after it was reopened to tourists. (AP Photo/Ajit Solanki)