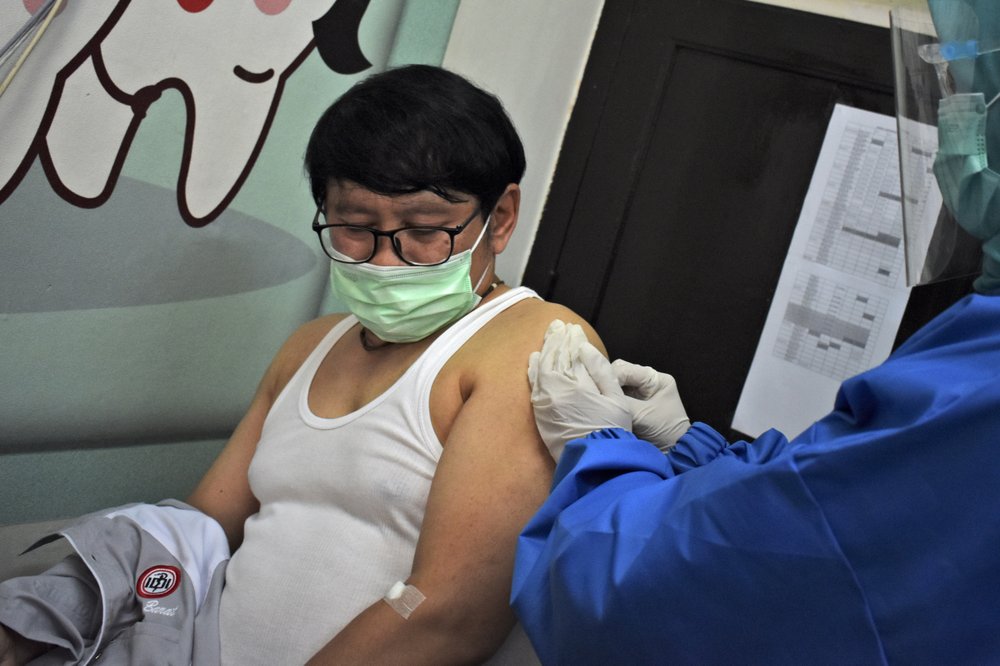 JAKARTA, Indonesia (AP) — More people in Indonesia rolled up their sleeves Friday to test a potential coronavirus vaccine developed by a Chinese company.

The Indonesian government announced the partnership between state-owned enterprise Bio Farma and the Chinese company Sinovac BioTech in early July. As part of the deal, Indonesia recruited 1,620 volunteers for the trial. The first 20 were injected with the candidate vaccine in Bandung, West Java province, on Tuesday, and more followed suit.

“We hope that this third clinical trial will be completed in six months. We hope that in January we can produce it and at the same time, if the production is ready, vaccinate all people in the country,” President Joko Widodo said on Tuesday.

After passing a medical and PCR test to confirm their health, volunteers were given a first dose of the experimental vaccine or a placebo, then a second dose 14 days later.

“I am not worried about the vaccine trial as I have searched the information related to a Sinovac vaccine before,” said Rina Mardiana, 44. “I want to join the trial for humanitarian reasons. I hope the pandemic will end soon.”

Clinical trial research leader Kusnandi Rusmil told The Associated Press that half the volunteers will be injected by the vaccine and the other half with the placebo. “We will see the comparison […] in seven months,” Rusmil said.

Bio Farma currently has a production capability of 100 million vaccine doses. The company is building a new facility, expected to be completed in December, that will increase the capacity to 250 million doses. Use of the vaccine will be prioritized for Indonesia, the world’s fourth most populated country, Bio Farma CEO Honesti Basyir said.

Called CoronaVac, the potential vaccine uses an inactivated pathogen, meaning the virus is grown in a lab and then deactivated or killed. In June the company announced that no severe adverse side effects had resulted from the phase 1 and 2 trials conducted in volunteers in China. The company is also planning clinical trials with thousands of volunteers in India, Brazil and Bangladesh.

Under normal circumstances, it takes years for a vaccine to be developed. But with many experts believing that a vaccine is the best hope against the virus, clinical trials and development have been rapidly accelerated since Jan. 10, when China shared the virus’ genetic sequence.

The trial comes at a time when Indonesia continues to have one of the highest confirmed caseloads in the region, with the actual number of cases suspected to be much higher. As of Thursday, Indonesia had 132,816 confirmed cases with 5,968 deaths.

By EDNA TARIGAN and VICTORIA MILKO

Image: A medical worker gives coronavirus vaccine candidate to a volunteer during a trial at a community health center in Bandung, West Java, Indonesia, Friday, Aug. 14, 2020. Indonesia’s only vaccine production company has started this week a so-called phase 3 clinical trials to test a potential coronavirus vaccine developed by a Chinese company. (AP Photo/Kusumadirezza)

Science and politics tied up in global race for a vaccine