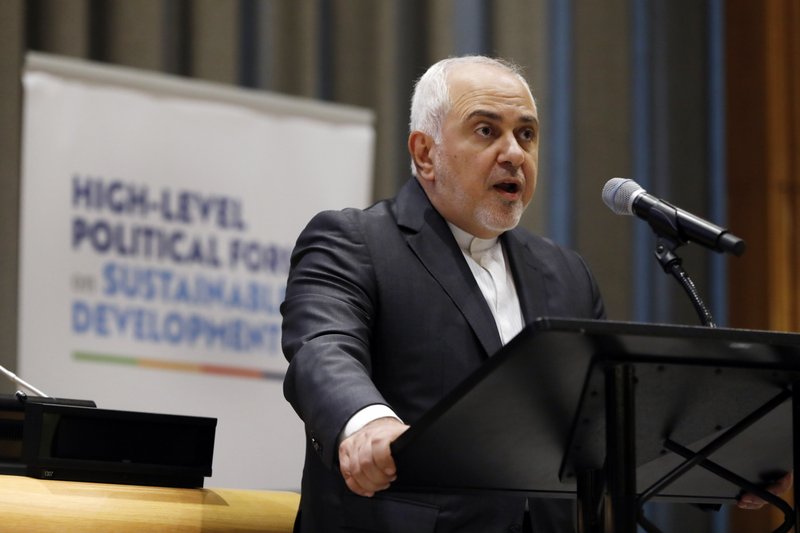 NEW YORK (AP) — Iran and the United States were only “a few minutes away from a war” after Iran shot down an American spy drone last month, Iran’s foreign minister said Thursday, but the diplomat said he remains hopeful that escalating tensions might somehow be resolved.

In a wide-ranging discussion with US-based media on the sidelines of a visit to the United Nations, Mohammad Javad Zarif also said that Iran could reverse recent moves to surpass uranium enrichment limits set by its nuclear deal with world powers.

“We are moving forward but that could be reversed as soon as the other side is prepared to implement its commitment,” he said, referring to US sanctions imposed on Iran.

Tensions are running high between Iran and the United States since President Donald Trump unilaterally pulled the US out of Iran’s nuclear deal with world powers that had been brokered under the Obama administration. Trump also brought back sweeping sanctions targeting Iranian oil exports that had been lifted by the deal, forcing countries around the world to dramatically limit business with the Islamic Republic and squeezing Iran’s economy as the currency tumbles.

Last month, after Iran shot down the more than $100 million US surveillance drone, Trump said he aborted a retaliatory strike only after learning that as many as 150 people may have been killed.

Heavyweights China and Russia are calling for de-escalation. French President Emmanuel Macron has made efforts to ease tensions, talking to both Iranian President Hassan Rouhani and Trump.

“We will talk to the French, the Japanese, others. If they have anything of substance, we will listen,” he said. Macron “is trying to reduce tension,” he said.

“I have every reason for optimism otherwise I wouldn’t be alive,” Zarif said. “Realistically, I believe we were a few minutes away from a war and prudence prevailed . so here’s a reason to be an optimist.”

He said Trump “exercised prudence by not agreeing to suggestions that were made to him to retaliate,” adding that: “In my view he received information that no war with Iran would be a short war.”

“We live in a very dangerous environment. The United States has pushed itself and the rest of the world into probably the brink of an abyss,” Zarif said.

Zarif also accused the Trump administration of trying to “starve” his people through sanctions and declared that Iran would not bow: “We will survive. We will prosper — long after President Trump is gone — because we have 7,000 years of proof of that.”

Zarif said he had several alternatives in mind to help break the impasse, but that he wouldn’t be picking up the phone to talk to the Americans and dismissed the idea of a meeting between the two country’s presidents.

“It’s not about photo ops. We are interested in substance,” Zarif said.

Zarif touted Iran’s relations with countries like China, Russia and India, but warned Iran would not expose details of its trading partners around the world.

He said that an Iranian supertanker seized this month with the help of British naval forces off the coast of Gibraltar was not carrying oil in violation of European sanctions on Syria. The British government said it would release the tanker if Iran could provide guarantees the oil was not heading to Syria.

And as Trump makes nuclear talks with North Korea a centerpiece of his foreign policy, Zarif said Iran had this advice for the country: “We told them to be careful. … Don’t give up too much – you may not have it in four years.”