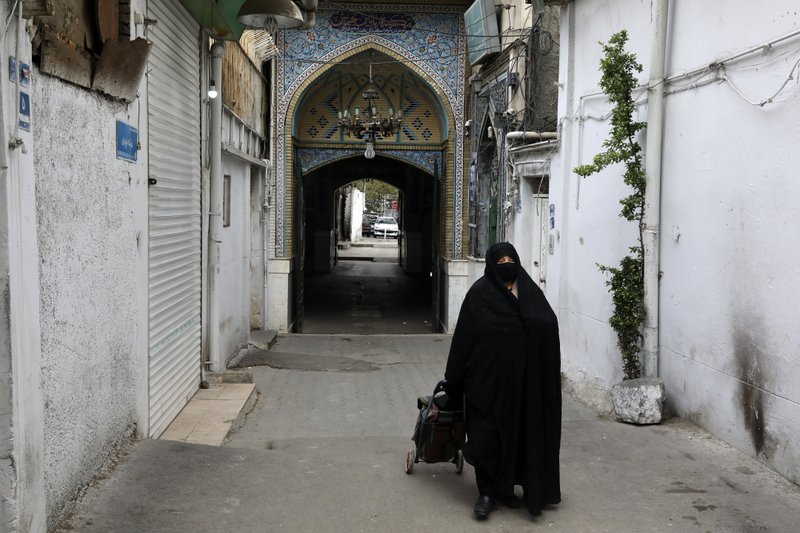 TEHRAN, Iran (AP) — Iran allowed some businesses in the capital and nearby towns to re-open Saturday after weeks of lockdown aimed at containing the worst coronavirus outbreak in the Middle East.

Iran was slow to respond to the pandemic and held off on imposing widespread restrictions even after other countries in the region with far fewer cases forced most businesses to close. Iran has reported more than 80,000 confirmed cases and over 5,000 deaths.

Gyms, restaurants, shopping malls and Tehran’s grand bazaar will remain closed. Shrines and mosques are also shuttered, and a ban on public gatherings remains in place. Government offices have reopened with a third of employees working from home, and schools and universities are still closed.

Traffic was heavy in Tehran early Saturday, the first day of the work week. Authorities allowed businesses outside the capital to reopen a week ago.

The virus causes mild to moderate flu-like symptoms in most patients, who recover within a few weeks. But it is highly contagious and can cause severe illness or death, particularly in older patients or those with underlying health problems.

Iran’s leaders have said they had to consider the economic consequences of quarantine measures, as the country struggles under severe sanctions imposed by President Donald Trump after he withdrew the US from Tehran’s nuclear deal with world powers.

On Friday, UN human rights experts called on Iran to release political prisoners who could be vulnerable to infection inside the country’s detention facilities. Iran has temporarily released 100,000 prisoners, but is still detaining many convicted on security charges, including several dual-nationals.

Rights groups say many of the dual-nationals are political prisoners or are being held as bargaining chips for future negotiations with the West.

“We recognize the emergency situation in the Islamic Republic of Iran and the problems it faces in fighting the pandemic, including reported challenges in accessing medical supplies due to sanctions,” the UN experts said. “Some are at great risk from COVID-19 due to their age or underlying health conditions. We call on the authorities to immediately release them.”

They said all seven have requested temporary release but have been rejected or not received a response.

Judiciary spokesman Gholamhossein Esmaili denied nationality was a factor in the prisoner releases. He was quoted by the Hamshahri daily as saying release is denied when it is forbidden by law or when “their freedom puts our citizens’ social, economic and psychological security at risk.”

Elsewhere in the region, Sudanese formed long lines outside bakeries and fuel stations early Saturday ahead of a round-the-clock curfew in the capital, Khartoum, that is set to last three weeks. The country, which is still reeling from last year’s uprising that toppled longtime ruler Omar al-Bashir, has reported 66 cases, including 10 deaths.

An outbreak in Sudan would severely strain the health system, which has been weakened by decades of civil war and sanctions.

Authorities have also banned Friday prayers in Khartoum mosques, a measure taken by several other countries in the region. The transitional government sacked Khartoum’s governor, Lt. Gen. Ahmed Abdoun Hamad, after he objected to the ban.

In Israel, authorities closed off two small Arab towns in the north to prevent the spread of the virus. Police said movement into and out of Deir al-Assad and neighboring Bineh would be strictly limited. Israel has increased testing in Arab areas in recent days, and the closures appeared to be linked to a spike in cases. Arab citizens of Israel account for 20 percent of the population and have long faced discrimination.

Israeli authorities have imposed similar closures on some ultra-Orthodox Jewish areas, where cases spiked after many disregarded health guidelines in the early days of the pandemic.

Israel, which imposed nationwide restrictions and ordered all non-essential businesses to close in mid-March, has reported more than 13,000 cases, including 158 deaths.

Image: A head-to-toe veiled woman wearing a face mask to curb the spread of the new coronavirus walks in Tajrish neighborhood in northern Tehran, Iran, Thursday, April 16, 2020. Authorities have canceled ceremonies marking the anniversary of the death of Ayatollah Khomeini, the founder of the Islamic Republic over COVID-19 disease concerns, which underscored Iranian officials’ expectation that the virus crisis will continue for several more weeks. (AP Photo/Vahid Salemi)