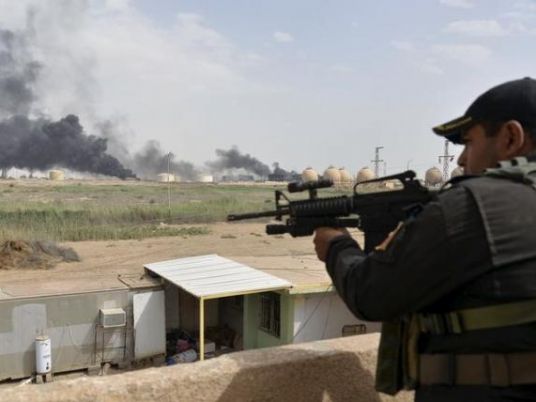 Iraq has sent an armored army division and a police strike force into the southern oil city of Basra to disarm residents amid intensified feuding among rival Shi'ite Muslim tribes, local officials and security sources said on Friday.
Forces had been deployed earlier to restore calm to rural areas running north of the city towards West Qurna and Majnoon oilfields on Wednesday, but a local official reassured foreign companies their assets were secure.
"The oil companies and oil sites and the roads leading to them are completely safe. There are no concerns in this regard," said Sabah al-Bazouni, head of Basra's provincial council.
The tribal fighting and military response are a sign of the growing problems that could face foreign oil companies, even though they operate far from areas of conflict with Islamic State.
The disputes have forced Baghdad to divert critical security resources from the frontlines with those militants in the north and west to the south, where oil fields account for more than 85 percent of production by the major OPEC member.
"This security operation targets areas north of Basra that have an abundance of tribal clashes and will also include neighborhoods inside Basra city in the future," said Jabar al-Saadi, head of the security committee at the Basra provincial council.
Prime Minister Haider al-Abadi held his weekly cabinet meeting on Wednesday in Basra where he called on security forces to "strike with an iron fist (against) the gangs that tamper with Basra's security".
With tanks and heavy machine guns, the security forces entered overnight the northern Basra district of al-Hussein, a flashpoint for tribal fighting also known as al-Hayaniya, Saadi said. Backed by army helicopters, they began raiding homes and seizing weapons, he added.
Iraq's economic backbone
Security forces arrested around 30 people on criminal charges and seized machine guns, mortars, rocket-propelled grenades, assault rifles and large ammunition caches, the security sources said.
"Protecting security in Basra province, which is the country's economic backbone, has become a priority," said Bazouni, the provincial council head.
As the holder of the world's fifth-biggest crude reserves, oil makes up around 40 percent of Iraq's gross domestic product and more than 90 percent of fiscal and current external receipts.
But lower oil prices and costs associated with the fight against the insurgents have strained Baghdad's finances. The 2016 budget forecasts oil at $45 a barrel and average exports nationwide of 3.6 million barrels per day.
Oil exports from southern Iraq dropped last month to an average of 3.215 million bpd, down from a record high in November but up from a year earlier.
Abadi visited West Quena-2 oilfield in August to reassure its Russian operator Lukoil (LKOH.MM) after officials warned production could be affected by protesters demanding jobs.
The people of Basra complain that although the bulk of Iraq's oil is produced and shipped from their province, they do not enjoy the benefits.