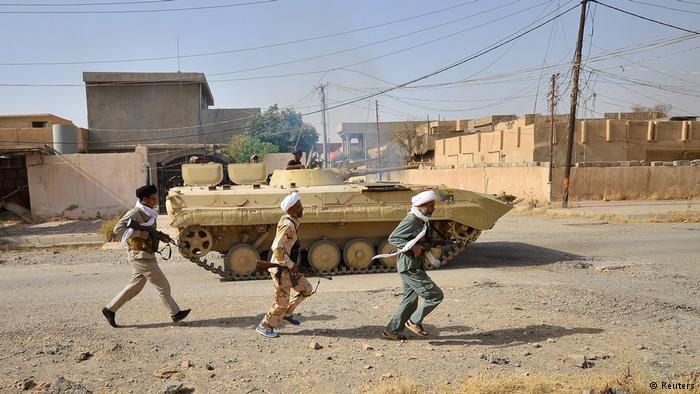 , some 1,400 “Islamic State” (IS) fighters turned themselves in, expediting Hawija’s liberation. In a series of operations, the Iraqi army swept through the region to clear any remaining pockets of IS fighters. However, in its effort to speed up the process, it hasn’t been as efficient as was hoped. The eastern part of Hawija remains unsafe and has attracted sleeper cells who are still active there, emerging at night to take food from civilians.

In response, the Iraqi army recently staged a nine-day operation in an effort to smoke them out. “We found tunnels, a bomb factory and an IS-run clinic,” says Mukaddam Ali, an Iraqi colonel stationed at a base outside nearby Kirkuk. “There was even a functional operation center,” he told DW.

Hawija still dealing with IS legacy

A ghost town to which no one is as yet allowed to return, much of Hawija has been seriously damaged as a result of air attacks and an explosion at an IS bomb factory. On the roads, the wrecks of cars every couple of hundred meters, which IS fighters used to slow the progress of the military last October, serve as reminders of the battle. Holes in the roads mark the booby-traps the army discovered in time, while in some more remote villages buckets and water containers are used to mark spots where they have not yet been cleared. Much of Hawija still resembles a ghost town, but locals are trying to regain a sense of normality

In the eastern part of the region, IS fighters have reportedly formed the so-called White Flag group. The new group is named after its white flag with a lion on it, but details are hard to come by. Captain Moath Obeidi, a security coordinator with the Iraqi government, says it consists of a mixed bag of Kurdish, Turkmen, Arab and Iranian fighters, many of whom were even on different sides of the conflict in the past — some fighting alongside IS, others joining forces with the Kurdish PKK, which fought IS in the area until the Iraqi army took over in October. “The only thing they have in common is their enemy: the Iraqi army. This is a textbook case of ‘the enemy of my enemy is my friend,'” Obeidi told DW. Still, in some local villages, civilians have returned and started to work their land and repair their homes. They have reopened their schools, too, including the girls’ school in Hodh Sitta village, with over 300 children aged six to 13. The girls wear colorful dresses –  a far cry from the black clothing and veils all girls and women had to wear under IS rule.

For the children’s sake, it is important to raise awareness “that the ideology of Daesh [Arabic name for IS] is a criminal one,” says head teacher Abdellah Najm.

The villagers, many of whose people work for the Iraqi army, police or government, suffered terribly under IS rule. Eighteen people were killed, most were displaced, and those who stayed lived in fear and poverty. Even though only six villagers joined IS, the whole village is seen as affiliated to the group. “We suffered as a result even during our displacement,” Najm told DW. “We were treated as if we were Daesh, too, not real Iraqis. In everyone’s minds, and that included the government and the media, it’s simple: Hawija is Daesh.” Now anyone with ties to those groups is no longer welcome in Hodh Sitta. Their houses have been destroyed and their families are not allowed back.

For Ahmed Dekhalf, the school’s assistant head master, it’s simple. “All the Daeshi should be sent to prison and their families to the camps.” IS families are kept in camps set up by the Iraqi government. “We don’t want them back. We need to get the message across that we reject their ideology, and that not all of Hawija is Daesh.”

But in the next village, a young sheikh of the Jibouri tribe disagrees. Ahmed al-Muheiri, who lost his father and two uncles to IS, fears that people will feel like outcasts in the camps. “The children that come out of there will be worse than their families are now. That way, we will have another crisis on our hands 10 years from now.”

Over strong coffee, the sheikh explains that he would prefer to bring the women and children back into the community, where they can be monitored closely, rather than leave them in camps, where they will be vulnerable to indoctrination. But he is fighting a losing battle: “We are a difficult society, and people do not see this as an alternative.” In the Hawija area, around 7,000 died during the conflict and another 5,000 are still missing. The sheikh, who took over his father’s tribal position as a conflict mediator in 22 of Hawija’s villages, says the loss has at least made the community aware of the need for tighter security. Previously, people were unwilling to report those who spoke out or acted against the government. Many even welcomed IS as a Sunni revolution against the much-hated Shiite government. That has now changed completely.

“The Sunni revolution is dead in Hawija,” says the young sheikh. “And when we find someone who still supports it, we report them to the security services. We do not let them walk around freely. We do not accept any group, religious or otherwise, that is against the government.”