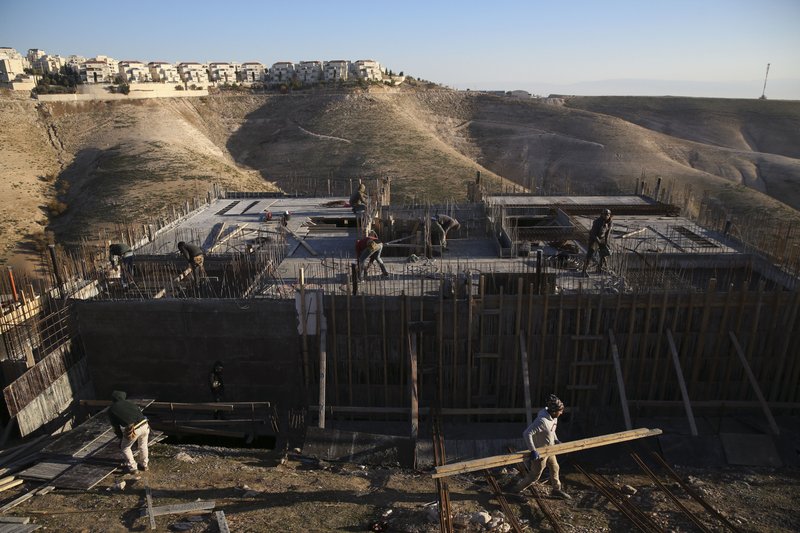 JERUSALEM (AP) — The Israeli government on Wednesday announced that it was advancing plans to build over 1,000 new homes in West Bank settlements, pressing ahead with construction as the Trump administration prepares to unveil a long-awaited peace plan.

The Civil Administration, the defense body that oversees civilian affairs in the West Bank, said its planning committee had approved a total of 1,015 housing units.

Peace Now, an anti-settlement watchdog group, said the decision included final approval for immediate construction of nearly 400 homes, with the rest requiring further bureaucratic approvals. It said most of the units were in isolated communities that would likely have to be removed as part of any future peace deal with the Palestinians.

Some 600,000 Israelis live in settlements in the West Bank and east Jerusalem — territories captured by Israel in the 1967 Mideast war and claimed by the Palestinians for a future state.

In a break from his predecessors, President Donald Trump has avoided condemning settlement construction, though he has urged Israel to show restraint.

Trump’s Mideast team, headed by his adviser and son-in-law, Jared Kushner, has been working on a peace proposal for months but has not said when it will be released.

Trump’s national security adviser, John Bolton, told reporters in Jerusalem on Wednesday that a “lot of progress” has been made, but would not say when it will be publicized.

The Palestinians have already said they consider the plan a non-starter, accusing Trump of being unfairly biased toward Israel after his unilateral recognition of Jerusalem as the Israeli capital in December.

There was no immediate Palestinian reaction to the latest settlement announcement, which came in the middle of a Muslim holiday, but it was expected to draw further condemnation.

The US State Department said in a statement that the administration was “firmly committed to pursuing a comprehensive peace between Israelis and Palestinians.”

“The President has made his position on the settlements clear, and we encourage all parties to continue to work towards peace,” the State Department said.

Israeli Defense Minister Avigdor Lieberman said in May that he aimed to fast-track plans for thousands of West Bank settlement homes in 2018.

Among the housing plans advanced Wednesday were hundreds of units in the West Bank settlement of Adam, north of Jerusalem, where an Israeli man was killed by a Palestinian last month. Lieberman had vowed to build there in response to the killing.

Palestinians sort through 8 years of mail held by Israel