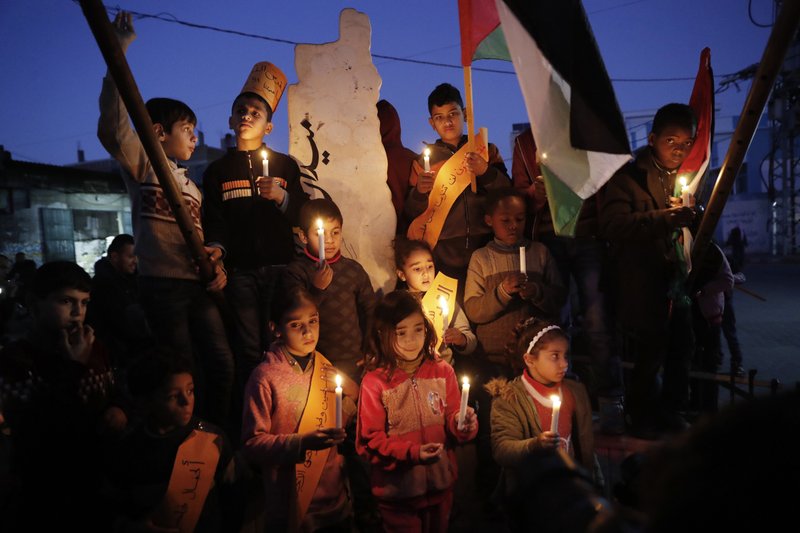 JERUSALEM (AP) — The Israeli military said on Friday that it launched “wide-scale” airstrikes on militant targets in the Gaza Strip shortly after Palestinian militants fired three rockets into Israel, two of which were intercepted.

There were no reports of casualties or major damage from the exchange of fire overnight, which came amid heightened tensions after President Donald Trump released his Mideast plan, a U.S. initiative aimed at ending the conflict that heavily favors Israel and was rejected by the Palestinians.

Palestinians have called for large protests after Friday prayers, including at a flashpoint holy site in Jerusalem that is sacred to Muslims and Jews. The plan contains mixed messages about the fragile understandings governing the holy site, which could provoke a backlash there.

Gaza has been relatively calm in recent months as Egyptian and U.N. mediators have worked to shore up an informal truce between Israel and Hamas, the Islamic militant group that rules the coastal territory.

Hamas has curbed rocket fire and rolled back weekly protests along the frontier that had often turned violent. In return, Israel has eased the blockade it imposed on Gaza after Hamas seized power from forces loyal to the Palestinian Authority in 2007.

Both Hamas and the Palestinian Authority have rejected the Trump plan, which would allow Israel to annex all of its Jewish settlements, along with the Jordan Valley, in the occupied West Bank. The Palestinians were offered limited self-rule in Gaza, parts of the West Bank and some sparsely populated areas of Israel in return for meeting a long list of conditions.

Hamas has vowed that “all options are open” in responding to the proposal, but is not believed to be seeking war with Israel. Palestinian militants have fought three devastating wars with Israel since the Hamas takeover.

Palestinians have held small, scattered protests in recent days condemning the Trump initiative, and larger demonstrations are expected after Friday prayers, including at the Jerusalem holy site known to Muslims as the Haram al-Sharif, or Noble Sanctuary, and to Jews as the Temple Mount.

It is the third holiest site in Islam after Mecca and Medina in Saudi Arabia, and is home to the iconic gold Dome of the Rock and the al-Aqsa mosque. It was also the location of the First and Second Jewish Temples in antiquity. The Western Wall nearby, the only remnant of the Second Temple, is the holiest place where Jews can pray.

The hilltop shrine is managed by an Islamic trust under Jordanian stewardship, and day-to-day affairs are governed by informal understandings with Israel known as the “status quo.” Non-Muslims are allowed to visit during certain hours, but Jews cannot pray there.

In recent years, increasing numbers of religious and ultra-nationalist Jews have visited the site, stoking fears among the Palestinians that Israel intends to one day partition it, as it has done to a similar site in the West Bank town of Hebron that is sacred to both faiths.

Israel has repeatedly said it has no intention of changing the status quo and accuses Islamist groups of spreading unfounded rumors to incite violence. The Trump plan, which heavily favors Israel, says the status quo should “continue uninterrupted.”

But the plan also says “people of every faith should be permitted to pray on the Temple Mount/Haram al-Sharif, in a manner that is fully respectful to their religion, taking into account the times of each religion’s prayers and holidays, as well as other religious factors.”

Palestinians view the sprawling esplanade as the last bit of territory that is fully theirs and the Dome of the Rock as a symbol of their national cause. Muslim worshippers have clashed with police there on numerous occasions in recent years in response to perceived infringements. A provocative visit to the site by Ariel Sharon, a right-wing politician who went on to become prime minister, ignited the second Palestinian intifada, or uprising, in 2000.

The site is part of the famed Old City in east Jerusalem, which Israel captured, along with the West Bank and Gaza, in the 1967 war. The Palestinians view east Jerusalem as their capital and want all three territories to form their future state.

Trump’s Mideast plan would create a disjointed Palestinian state with a capital on the outskirts of east Jerusalem, beyond the separation barrier built by Israel. The rest of Jerusalem, including the Old City, would remain Israel’s capital.

The plan would allow Israel to annex large parts of the West Bank almost immediately, while Palestinian statehood would be heavily restricted and subject to several preconditions that the Palestinians have always rejected.

Image: Protesters hold light candles as others wave their national flags during a protest against the Mideast plan announced by the U.S. President Donald Trump, at Jebaliya refugee camp, Gaza Strip, Thursday, Jan. 30, 2020. Trump’s Mideast plan would create a disjointed Palestinian state with a capital on the outskirts of east Jerusalem, beyond the separation barrier built by Israel. The rest of the Jerusalem, including the Old City, would remain Israel’s capital. (AP Photo/Adel Hana)

After 20 years, Palestinian mother and son reunited in Egypt