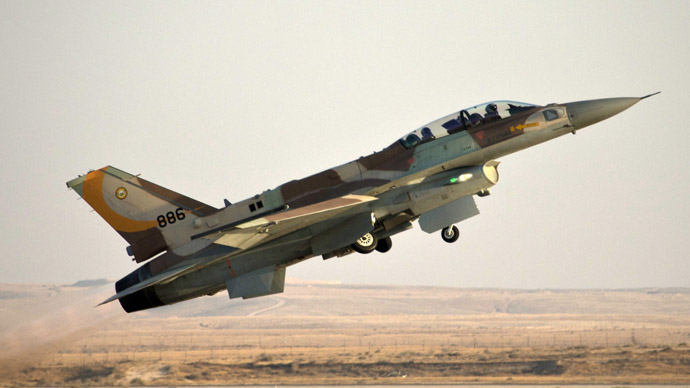 Israel’s military said on Friday it was ready to protect a frontier village in Syria held by the Syrian government, where Damascus said jihadist rebels exploded a car killing at least nine people.

The statement was an unusually explicit Israeli pledge to intervene in the war in Syria, where Israeli officials are voicing deeper alarm at the role of Iran and its Lebanese ally Hezbollah, which are fighting alongside the Syrian government.

The Israeli air force says it has struck arms convoys of the Syrian military and Hezbollah nearly 100 times in recent years. Its most recent strike was on Wednesday according to the Syrian government.

Quneitra province in Syria, where Hader village is located, is particularly sensitive for Israel because it lies next to the Golan Heights area that Israel captured from Syria in 1967.

Syrian rebel factions launched an attack on Syrian government territory in Quneitra on Friday, with the aim of connecting two insurgent-held areas. The attack included the car bomb in Hader, which Syrian state media attributed to the jihadist group formerly known as the Nusra Front.

A military media unit run by Hezbollah said the insurgents attacked from three directions and made no gains after heavy fighting during the day. It accused Israel of firing a surface-to-surface missile at a Syrian army position in the area.

Syrian state media accused Israel of giving various kinds of support to the Nusra Front. In its statement, the Israeli military denied any involvement with jihadist groups in the fighting.

The village of Hader is populated by members of the Druze, a minority religious sect present in Syria, Israel, the Palestinian Territories and Lebanon.

Israel’s Druze, some of whom have reached the senior echelons of the Israeli military and government, have been calling for help on behalf of their brethren in Syria, both at home and abroad. The flashpoint village of Hader has been of particular concern.

After Friday’s car bomb there, Syrian state television broadcast footage it said was of residents of the Israeli-controlled Golan Heights trying to cross the border to help people in Hader.

Druze residents tried to cross into Syria, but were held back by Israeli soldiers, Israel’s military said on Twitter.

“The IDF (Israel Defense Forces) is prepared and ready to assist the residents of the village and prevent damage to or the capture of the village Hader out of commitment to the Druze population,” the military said in a statement.

Israeli officials have previously said they were looking at the possibility of assisting Hader, whose residents have Druze kinsman lobbying on their behalf in Israel.