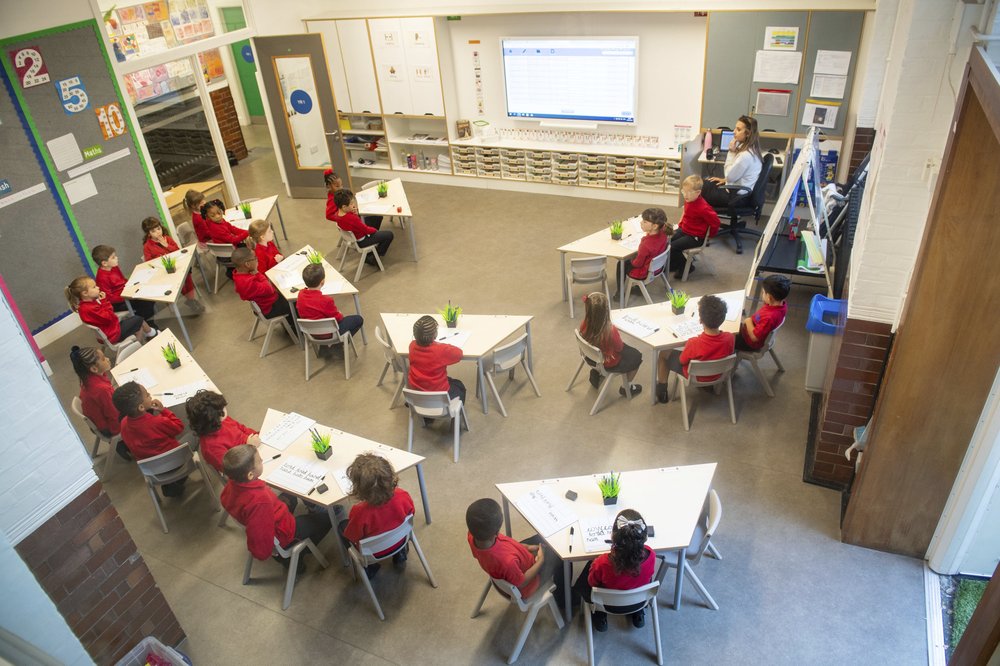 PARIS (AP) — Tugging on their masks or dashing to hug long-unseen friends, millions of children returned to school across Europe and beyond Tuesday in a mass experiment aimed at bridging inequalities and resuscitating economies — despite the persistent pandemic.

The virus threat lurked in the shadows as children kissed their parents goodbye in France, shyly greeted their teachers in Israel, settled into spaced-out desks in England, and raised their hands in Russia.

While acknowledging “a bit of fear,” Jerome Continent brought his first-grader Baptiste to school Tuesday anyway in the Paris suburb of Roissy-en-Brie, where the buzz of first-day excitement was even more intense than usual after the coronavirus upended the previous school year.

“I know we are being careful,” he said. “The children also have to live.”

With France reporting thousands of new infections daily — more than any of its neighbors — all French schoolchildren 11 and over must wear masks all day, recess and music class included. Similar rules are in place in Balkan countries, while other countries are more lax about masks. Some classrooms look starkly different from previous years, with plastic shields around desks and virus warning signs plastered everywhere.

While many US school districts started class online only and others introduced a mix of online and face-to-face learning, in-person class is the norm as Europe goes back to school. Governments are trying to show that life goes on despite a virus that has infected at least 25 million people worldwide and killed more than 800,000.

France’s prime minister sat with elementary school children at a school Tuesday, and the president wished kids well in an Instagram video. In Britain, Education Secretary Gavin Williamson sent an open letter to parents saying school “really is the best place for them to be. Nothing can match being in a classroom with a real teacher to inspire them and their friends to share their discoveries.”

Hundreds of thousands of British schoolchildren are heading back to classrooms, with parents facing fines if they refuse to send their kids back. Schools have introduced measures to reduce contact between children, such as staggering break times and keeping pupils in “bubbles” with their class or year group.

The World Health Organization is advising governments on how to resume in-person schooling safely, and acknowledged Monday that while the virus remains a real threat, school closures have hurt children’s mental health and social development, especially those from low-income families, with disabilities or in an abusive home environment.

“We cannot let children become the hidden victims of this pandemic by denying them the opportunities they so fundamentally deserve,” WHO Europe said in a statement.

Medical experts say the risk of opening schools depends on how widespread COVID-19 infections are in the community and what safety measures are taken. Evidence suggests young children don’t spread the disease very easily, while kids aged 10 and up may transmit as easily as adults. But while children appear less likely to get infected than adults, severe cases and deaths have occurred.

The return to school isn’t working smoothly everywhere. A middle school class in northern France ordered all its pupils into two-week quarantine after a student tested positive last week.

And in Serbia, the complicated reopening system has frustrated working parents. Still, about 95 percent of parents have decided to send their children to schools anyway.

In Estonia, back-to-school day looked almost normal, with students wearing their finest dresses or neat school uniforms and donating flowers to teachers. As in many former Soviet republics, Sept. 1 marks a national day to celebrate education, with musical performances and speeches.

Schools remain closed in most of Africa and several Asian countries, but have resumed elsewhere – notably in China, where the last groups of students returned to regular classes Tuesday, following two weeks without new cases of local transmission in the country.

“I have a good feeling about today,” said Faouzia Hariche, Brussels alderwoman in charge of education. “I can see that children are happy to return to school, teachers are all present so we will try to organize things in the most natural way possible.”

Image: Pupils sit in a classroom on the first day back to school at Charles Dickens Primary School in London, Tuesday Sept. 1, 2020. Hundreds of thousands of British schoolchildren are heading back to classrooms, with the country watching nervously to see if reopening schools brings a surge in coronavirus infections. Tuesday marks the start of term for about 40% of schools in England and Wales, with the rest reopening in the coming days. (Dominic Lipinski/PA via AP)

Latest on the worldwide spread of coronavirus