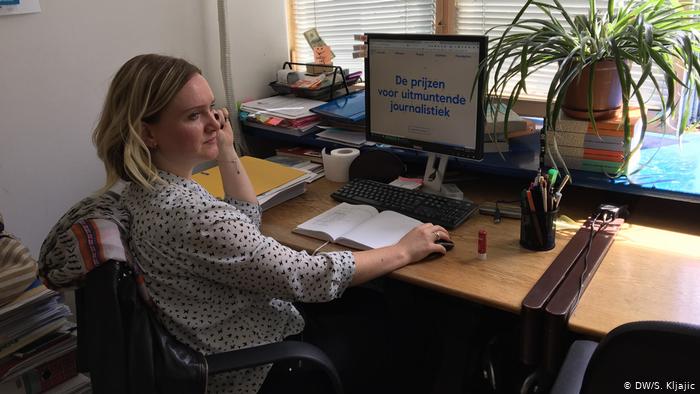 , using them to pillorize his opponents. DW spoke with award-winning reporter Andjela Milivojevic from the Serbian Center for Investigative Journalism (CINS), who talked about how the mainstream media is being controlled.

DW: Reporters Without Borders (RSF) ranked Serbia as “unsafe” and slammed “aggressive smear campaigns” against investigative reporters in its latest report on Thursday. What is your take on press freedom in Serbia?

Andjela Milivojevic: I believe RSF were right to describe Serbia as unsafe for journalists this year. It was a good way to put it, and I would add that, in addition to Serbia being unsafe, journalism in Serbia is unwanted.

Investigative reporting wasn’t really popular under any previous government in Serbia. Is there really a difference under President Vucic?

What seems to be different […] is that this government seems to be much more aggressive. They do not shy away from mounting campaigns against journalists, having photos of our editors or directors published in boulevard press, singling them out as undesirables, as people who hate the president, for example. It seems to me that the atmosphere in society is now that we journalists are constantly perceived as some undesirable faction, something that ideally should not even exist.

The government does it, most of all, through the fact that the public broadcaster is owned by the state and is financially, and in every other way, dependent on the state. There is also the fact that other national TV channels also side with them by completely ignoring any information that isn’t positive for the government.

We have two realities in Serbia: the one presented by the dominant media, and the real one reported on by online portals and a few independent outlets, but which does not reach a major audience.

Year after year, the institutions are becoming more and more closed off and refusing to deliver data. This is one way for them — not to control us, but to sabotage our work. The other way that is also a constant is for them not to talk to us. There is a whole range of politicians who never want to give statements to the so-called “undesirable media.”

Have you personally faced problems because of your work?

A few years ago, our website was hacked and an article was removed. After that, we noticed that some people had been following us for several days, and we reported it to the police. Thankfully, there weren’t any physical assaults, but we have been constantly targeted by mass-circulation papers and called public enemies, people who hate the government.

A Serbian internet portal recently called out DW correspondent Sanja Kljajic as one of the journalists who had “disgraced Serbia” over a documentary about Albanian women. This week, an online video targeted Slobodan Georgiev, the head of Balkan Investigative Reporting Network (BIRN), calling him a “traitor.” It also targeted independent platforms CINS and KRIK in a similar way. How often do these attacks take place, and how much of an impact do they have?

This latest video from a few days ago was somehow very disturbing for all of us. It just marks Georgiev so clearly as someone undesirable and bad, from the government’s perspective, which I believe to be inexcusable.

They attack us on this level, calling us junkies or saying that we go out a lot, or — like in Sanja’s case — that we betray Serbian people by writing about Albanian women. The latest attack has triggered a major response, but these things keep happening. I find this intolerable, most of all because, as much as I know, nobody from the government has so far distanced themselves from it.

Western countries donate a lot of money to support independent media outlets in Serbia. At the same time, Western leaders are quite reluctant in raising the issue of media freedom with the Serbian government, which presents itself as pro-European. What kind of support would you like to see from EU politicians?

Western politicians could take a look at the reality happening in Serbia, instead of only looking at the chapters in Serbia’s EU ascension treaty, or at the laws which are adopted but not implemented.

In practice, laws in Serbia do not go into effect and do not apply to everyone. In practice, there are desirable and undesirable groups, and we cannot keep closing our eyes to the fact that journalists are constantly being censored.

We want clear support, saying that our politicians and government should not treat the media the way they do. Western countries, regardless of their strong support for independent journalism through donations — politically, I don’t think there is a point to keep us going with donations, if the citizens cannot hear us. And they cannot hear us because the mainstream media is being controlled. We keep moving in a circle, and one day the circle will disappear.

Andjela Milivojevic is a Belgrade-based investigative reporter. She has worked with CINS since 2011. She was part of the team which claimed the 2017 European Press Prize for a series of articles on corruption and organized crime in Serbia.

This interview has been condensed and edited for clarity.