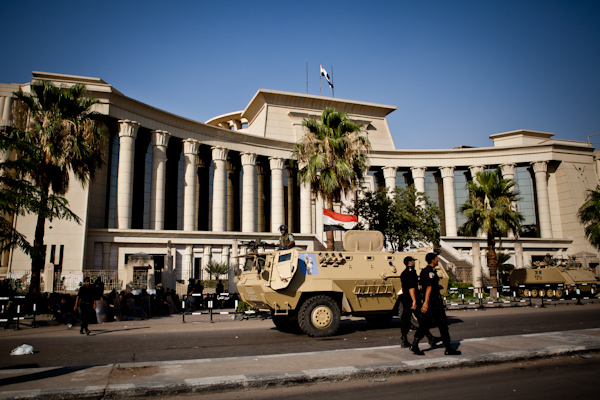 The decision of Minister of Justice Ahmed Mekky to transfer judicial inspection powers from his ministry to the Supreme Judicial Council is considered by experts to be a remarkable step towards judicial independence, a demand long raised by judges.

The decision to transfer the Judicial Inspection Authority comes on the heels of Mekky’s appointment, his brother Mahmoud’s appointment as vice president, and the choice of Hossam al-Gheriany to head the Constituent Assembly. All are considered leading figures in the judicial independence movement.

While the changes send a clear message that President Mohamed Morsy is keen to remove former regime affiliates from the judiciary and end the decades-long control of the executive authority over the judiciary, they also raise concerns about the creation of a new, more Brotherhood-friendly judicial body.

One of the key mechanisms that ensures the judiciary’s independence from the executive branch is the appointment system, in which the Judicial Inspection Authority is a key player.

While the authority does not appoint judges itself, its functions include preparing information about different candidates ahead of judicial appointments for — at that time — the Ministry of Justice, who made the appointments, and receiving complaints about the general prosecution’s performance.

Under Hosni Mubarak, the authority was also involved in punishing over 3,000 judges who protested fraudulent presidential elections in 2005, and forced judges to resign. Those who refused were referred to disciplinary courts.

“During the Mubarak era, the Judicial Inspection Authority was the tool used to punish judges who were not liked by the regime. A judge could be penalized by sending him to work in courthouses far away from where he lives with the worst working conditions,” says Zaghlol al-Balshy, another leading figure in the independence movement, who is also vice president of the Appeals Court. The Supreme Judicial Council has suggested Balshy as a potential head of the authority.

Mubarak’s Justice Ministry used their delegation powers to appoint certain judges to head critical positions in the judiciary. The practice was long-criticized by independent judges who called for ending delegation as an executive policy to control the judiciary.

“Morsy will definitely face some resistance, especially from judges affiliated with the ousted regime, [and] those who benefited from delegation by the Ministry of Justice,” human rights lawyer Gamal Eid told Egypt Independent.

If this policy ends, only the Supreme Judicial Council, the highest judicial authority in the country, will control the appointment of judges, says Zakareya Abdel Aziz, a leading figure in the independent judiciary movement.

The quest to limit the powers of the executive branch over the judiciary has also been subject to a legal battle, with a draft law for judicial authority still pending approval by Parliament.

With three governments in place over the last 18 months, and an elected and now-dissovleds Parliament, the law was never passed.

Months before the parliamentary elections, the Supreme Judicial Council appointed a panel, headed by Mekky, to prepare a draft law to be amended. Ahmed al-Zend, the head of the Judges Club, prepared another draft opposing the justice minister’s draft.

While both drafts agree that judicial oversight should be taken away from the Ministry of Justice, they differ on certain issues. For example, Zend’s draft makes seniority the only criteria for choosing the judges of the Court of Cassation and the Appeals Court, but Mekky’s suggests that each court elects its presiding judge from amongst the three longest-serving ones.

The rift between the two currents continued, and all efforts to issue the law were in vain as Parliament failed to issue that law.

“The nature of this rift is a battle between the good and the bad,” Abdel Aziz told Egypt Independent.

Yet, Abdel Aziz also argued that claims of a divisive conflict between two movements inside the judiciary are overstated.

“Like in any institution in Egypt, there are those few judges that resist change,” he said. “But the majority of Egypt’s judges are calling for independence, because lack of independence threatens the integrity of any honorable judge.”

Zend, who had allegedly said that the judiciary under Mubarak was totally independent, is said to hold a significant following at the Judges Club.

“Cleansing the judiciary will not happen just through issuing some laws, it will take time until the culture of the judges themselves changes,” said Eid.

Both the Mekky Brothers and Gheriany are known to have Brotherhood sympathies, which has raised speculation that Morsy chose them to foster a Brotherhood-friendly judiciary. Judge Hesham al-Bastawisi, for example, who also belongs to the independent judiciary movement and was a contender in the presidential race, was not included in Morsy’s staff.

Constitutional Law Professor at Cairo University Raafat Fouda believes that there is a major “political and intellectual conciliation” between the Brotherhood and the appointed judges, especially in issues related to the independence of the judiciary and recent rulings by the Supreme Constitutional Court.

A Supreme Court ruling dissolved the Brotherhood-dominated Parliament in July, deeming the political exclusion law, issued by the same Parliament, as unconstitutional. The decision allowed Mubarak’s last Prime Minister, Ahmed Shafiq, to remain in the race.

Mekky slammed the two rulings, deeming them as politicized stances from the court against the Brotherhood in favor of the military junta.

The more liberal-leaning Supreme Constitutional Court is beyond the scope of the Supreme Judicial Council and is expected to be another battlefield in the on-going Brotherhood quest to consolidate its power.

Yet Fouda dismisses the seriousness of the claims of having a Brotherhood-flavored judiciary as he believes that most of the independent movement is on good terms with the Brotherhood.

Moreover, the draft law that Mekky is battling for would weaken the minister of justice’s control on judges.

According to the current judicial authority law, the minister of justice controls the appointment of the prosecutor general. Mekky’s draft law would further weaken the ministry’s control over the judiciary and would put the general prosecution under the jurisdiction of the Supreme Judicial Council, Fouda argued. Thus, the powers of the Minister of Justice would only be administrative.

Furthermore, Mahmoud Mekky’s appointment as vice president, Fouda argues, has no relationship with the judiciary, as the post is merely political.

There are concerns, however, about Gheriany’s appointment to head the Constituent Assembly.

“All the fears are concentrated on the fate of the judiciary in the upcoming constitution, especially the status of the Supreme Constitutional Court and the State Council,” he concluded.