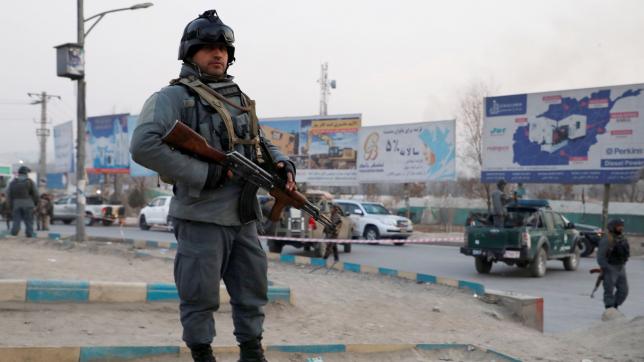 KABUL (Reuters) – Afghan authorities on Tuesday collected 43 bodies from a government compound in the capital Kabul that was targeted by a suicide bomber and extremists armed with assault rifles on Monday, officials said.

The attack began when the suicide bomber blew up his explosives-laden car in front of a government building that houses a public welfare department in an eastern neighborhood of Kabul.

Some of the attackers rampaged through the building of the Ministry for Martyrs and Disabled Persons taking workers hostage, and others fought a prolonged gun battle with local security forces.

Health ministry spokesman Wahid Majroh said so far 43 bodies and 10 injured had been transported by ambulances from the attack site. One policeman was killed and three militants were gunned down during seven hours of fighting inside the government compound.

Afghan forces evacuated over 350 civilians from the building before calling off the operation on Monday night. No militant group has claimed responsibility for the complex attack that was identical to previous attacks by Taliban insurgents on government offices, foreign buildings, and military bases.

Abdullah Abdullah, the government’s chief executive, blamed the Taliban for the attack.

“The ‘Taliban’ crime syndicate must know that with every attack they carry out against our people our resolve is further strengthened to eliminate them. Their conduct is a disgrace to the very notion of peace,” he said in a tweet.

However, the Taliban spokesman Zabihullah Mujahid said in a statement that the group was not involved in the attack on Monday.

The latest assault came just days after US President Donald Trump said he was considering pulling out at least 5,000 of the 14,000 US troops currently deployed in Afghanistan.

The possibility of thousands of US troops leaving has triggered confusion and panic in the Kabul government and foreign missions who fear that sudden withdrawal would lead to the return of the Taliban regime, who are fighting to expel foreign forces, topple the Western-backed government and restore their version of hardline Islamic law in Afghanistan.

But Marine General Joseph Dunford, chairman of the US Joint Chiefs of Staff who was in Afghanistan on Christmas Eve, was quoted by local news channels as saying that the mission for troops in Afghanistan continues without any changes.

“There are all kinds of rumors swirling around,” said Dunford while addressing hundreds of US troops gathered Monday at a base in Afghanistan.

The Taliban controls nearly half of Afghanistan and are more powerful than at any time since the 2001 US-led invasion. They carry out near-daily attacks, mainly targeting security forces, government officials and civilians as human shields.

Even as diplomatic efforts to resolve the conflict have intensified, fighting between the Taliban and Afghan forces backed by foreign troops has not subsided.

In the north, Taliban fighters killed a district police chief and kept up the pressure to seize control over parts of Faryab province on Tuesday.

Karim Youresh, a spokesman for the Faryab police said the police chief died in clashes in the Garziwan district that also killed 16 insurgents.

In eastern Nangarhar province, the Taliban killed eight pro-government militia members and injured 12 during clashes in the Bati Kot district.

Attaullah Khogyani, a spokesman for the Nangarhar governor said the Taliban attacked several security checkpoints, with the battles continuing for hours. Ten Taliban were killed and dozens were wounded.

Afghan forces also killed a Taliban field commander in western Herat province on Monday. Mullah Javed, a Taliban military commission chief, and three aides were killed in an air strike in the Zawul district, said a police official in Herat on Tuesday.

Air and ground operations have surged in recent weeks as General Scott Miller, who took command of US forces in Afghanistan in September, has pressed government forces to go on the attack to strengthen their hand in any talks.

Trump pulling out of Syria. Might Afghanistan be next?