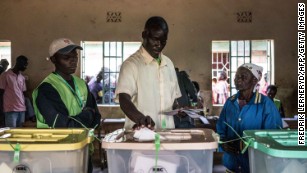 Kenya’s Supreme Court has invalidated the result of last month’s contentious presidential election and ordered a new vote, after a legal challenge by the opposition.

Four out of six judges upheld a petition filed by opposition candidate Raila Odinga, who claimed the re-election of President Uhuru Kenyatta was fraudulent.
“The presidential election was not conducted in accordance with the constitution, rendering the declared results invalid, null and void,” Chief Justice David Maraga said, ordering fresh elections within 60 days. 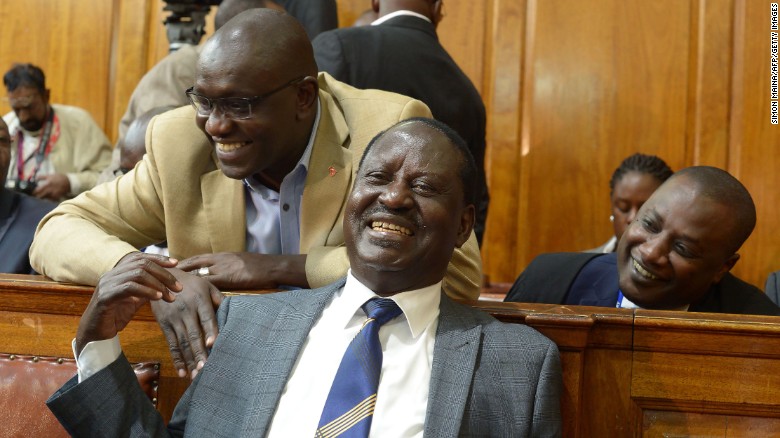 Kenya’s opposition presidential candidate Raila Odinga (C) reacts to the Supreme Court ruling in Nairobi on Friday.
In a decision that surprised many observers, the court agreed with opposition arguments that the electoral commission had committed irregularities that invalidated the poll. It also raised questions for international monitors, who had declared the election fair.
Odinga was jubilant as he welcomed what he called a “precedent-setting ruling” by the court.
“For the first time in the history of African democratization, a ruling has been made by a court nullifying the election of a president,” he said. “This indeed is a very historic day for the people of Kenya and by extension the people of the continent of Africa.”
In a televised address to the nation, Kenyatta said he disagreed with the court’s ruling but would respect it.
“I disagree with it because as I’ve said, millions of Kenyans queued, made their choice, and six people have decided that they will go against the will of the people,” he said.
Kenyatta said his primary message was for all Kenyans to keep the peace. “Your neighbor will still be your neighbor regardless of whatever has happened,” he said. “Regardless of their political affiliation, regardless of their religion, regardless of their color, regardless of their tribe.” 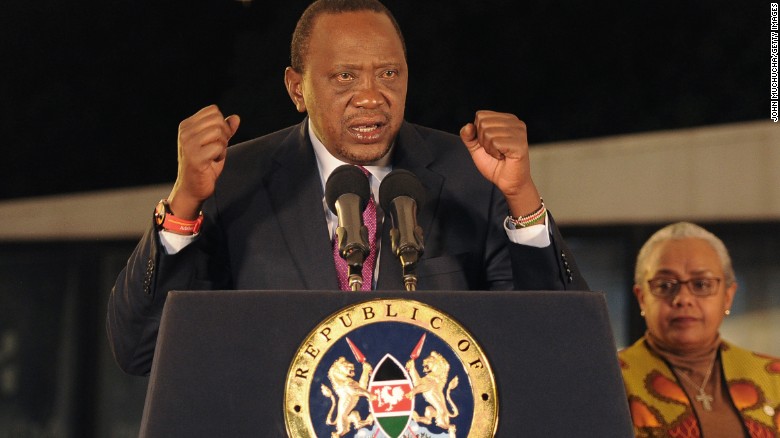 Kenya’s President Uhuru Kenyatta, flanked by his wife, speaks following the Electoral Commission’s official announcement of the election results on August 11 in Nairobi.
As news of the court’s decision spread, cheers and celebrations could be heard on the streets in parts of the capital, Nairobi.
But it’s not yet clear if the ruling will spark public protests. Although Kenya’s 2013 election was mainly peaceful, the country plunged into widespread violence in the aftermath of the 2007 vote. More than 1,000 people were killed in months of bloodshed after Odinga, defeated by then-President Mwai Kibaki, claimed the vote was rigged.
After Kenyatta was declared the winner last month by 54 percent to 45 percent for Odinga, sporadic violence erupted in some areas, claiming the lives of at least 24 people nationwide.
Odinga is a longtime challenger for the presidency who has yet to claim the country’s top office. Kenyatta, the 55-year-old son of the country’s founding President, has already served one five-year term.

Supporters of Kenya’s opposition leader Raila Odinga celebrate in the streets of Nairobi on Friday.

Kenyatta’s lead counsel, Ahmednassir Abdulahi said in court that his client wanted to see the full judgment to understand how the alleged irregularities would “obliterate” his 1.4 million vote winning margin.

“My lord it’s obvious, and I’m not afraid to say, that this is a very political decision you have made this morning but we will live with the consequences,” Abdulahi said.
He added that the will of the people would prevail. Six judges participated in Friday’s ruling, the Supreme Court has seven members but can conduct proceedings as long as five judges are present.
The court has not yet published its full written ruling explaining why the election was invalid but has 60 days to do so.
One of the most contested aspects of the election was the apparent discrepancy between the electronic results as transmitted and the manual count. 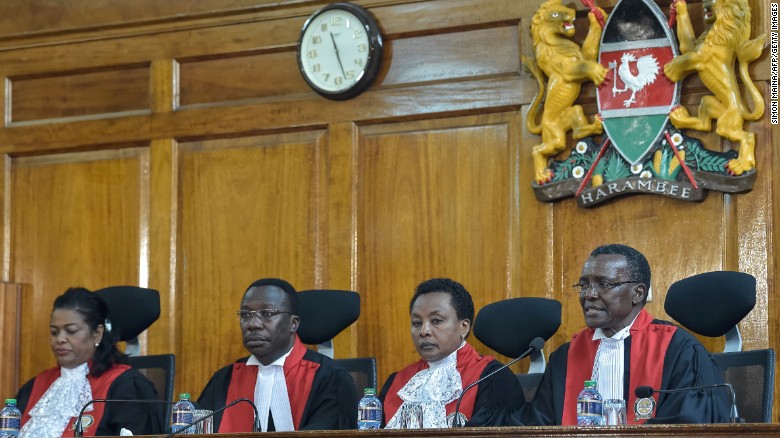 Kenyan Supreme Court judges uphold an opposition petition challenging the result of the August 8 presidential election in Nairobi.
The head of Kenya’s electoral body, the Independent Electoral and Boundaries Commission, suggested that discrepancy was the basis for the court’s ruling.
“The focus of the decision is in the transmission of presidential results. Therefore there were no aspersions cast on the voting and the counting of the votes,” chairman Wafula Chebukati said.
Chebukati said the commission was committed to ensuring that the new election “is done in accordance with the constitution, the relevant laws” and urged the prosecution of any staffer found to have broken the law. He also said he had no plans to step down.
“The commission urges all Kenyans to remain calm and restrain themselves from any political rhetoric that may undermine the stability and cohesion of our country,” he added. 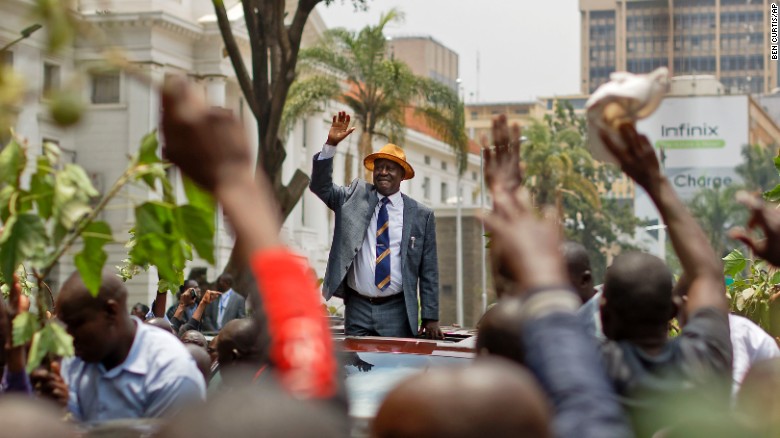 Opposition leader Raila Odinga smiles and waves to a crowd of his supporters as he leaves the Supreme Court on Friday
In his address after the ruling, Odinga said he had “no faith” in the electoral commission. “They have committed criminal acts. Most of them actually belong in jail and therefore we are going to ask prosecution for all the electoral commission officials who have committed this monstrous crime against the people of Kenya.”
Rights group Amnesty International’s country director Justus Nyang’aya said the “ruling demonstrates the independence of Kenya’s judiciary and sets an example for the rest of the world.” He urged all parties to comply with the judgment and called on police to exercise restraint in their handling of celebrations or protests.
Two women in Nairobi’s Kibera slum, where some of the post-election violence erupted last month, told CNN they welcomed the court’s ruling.
“It does mean a lot to me. I am sure Kenya will be at a better place, I am really happy about the decision,” said Roseyln Aoko.
“I am really happy about today. I have not even had lunch since I heard the results,” said 36-year-old Margaret Akinyi. 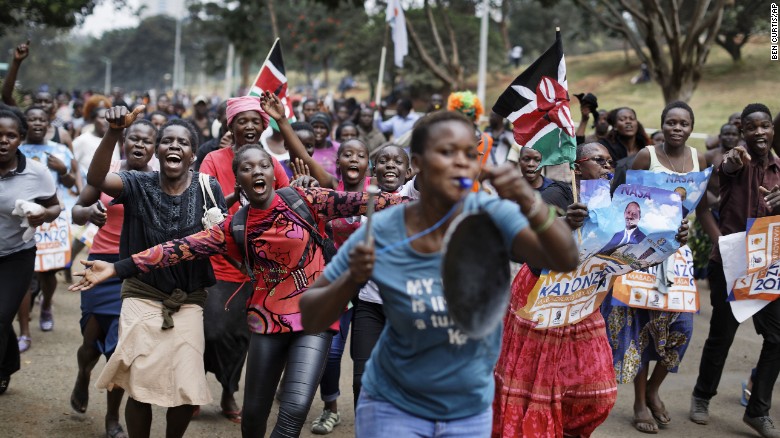 Supporters of opposition leader Raila Odinga celebrate in Uhuru Park, some carrying Kenyan flags and posters of Odinga.
Most of the demonstrators in last month’s post-election were supporters of Odinga, who had called the vote rigged. National election officials dismissed the accusations, however, saying the vote was free and credible.
More than 400 international election monitors were also deployed across the country to monitor voting, the tallying process and the post-election period.
Former US Secretary of State John Kerry, who served as an election observer for the Carter Center, said then that while there were “little aberrations here and there,” the election was not rigged.
In one unexplained incident, the head of information technology for Kenya’s Integrated Electoral Management System, Chris Msando, was found murdered days before the vote. His department is responsible for voter-identification and result-transmission technology. Any unrest in Kenya could have ripple effects far beyond the nation of 47 million people.
As the largest economy in East Africa, Kenya is a crucial trade route to the continent and provides an important buffer of stability in a region that includes the fledgling Somali government and the politically tense Sudan and South Sudan.
Trading on Kenya’s stock exchange, the Nairobi Securities Exchange, was briefly suspended following the ruling but has since resumed.
“There was heavy selling, prices were coming down, there was a level of panic selling in that limited time,” said its chief executive, Geoffery Odundo. “This outcome, people are yet to digest what it means. We have no precedent so investors are a bit cautious. Now we are seeing some level of calm.”