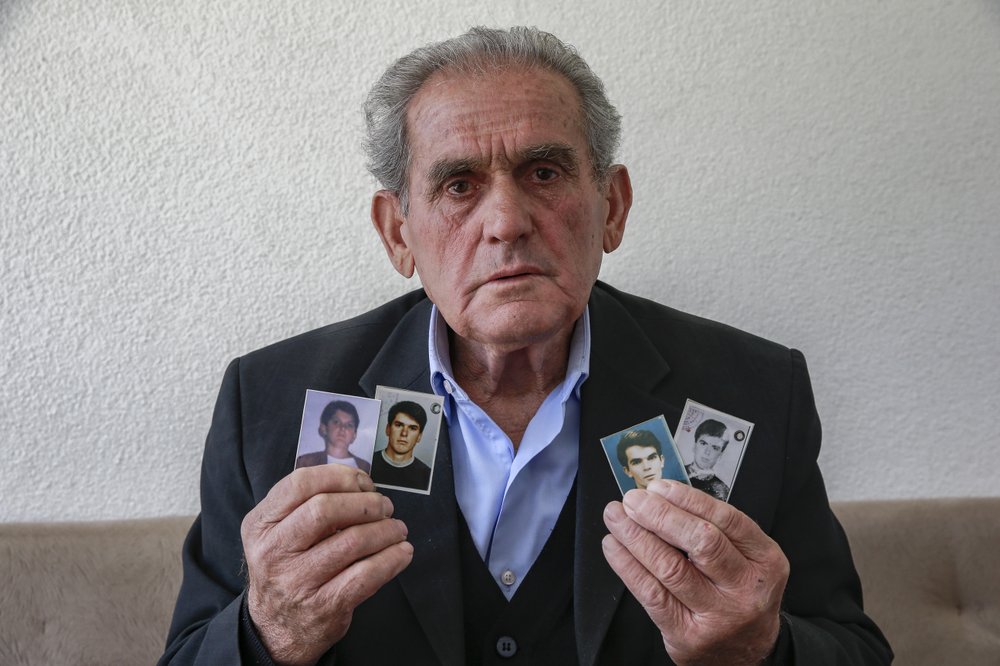 CABER, Kosovo (AP) — Halil Hasani is convinced his four sons are alive and imprisoned somewhere in Serbia more than two decades after police and paramilitary forces took them from a village in Kosovo.

At the time, an armed uprising by ethnic Albanian separatists had led to a bloody Serb crackdown, an international humanitarian crisis and a NATO bombing campaign in Kosovo, then a Serbian province. The 1998-1999 war left more than 10,000 people dead and 6,500 missing. Forensic scientists are still searching for hidden graves.

Hasani, 74, keeps four pictures always close to his heart, one for each of his missing sons. Fadil, then 32, Gazmend , who was 24, Armend, age 20, and 15-year-old Hasan were seized on June 8, 1999, the day before Serbia signed a deal with NATO to withdraw from Kosovo.

It’s been almost 21 years, but their father has not lost hope of seeing them again. The list of people officially considered missing in Kosovo from the war is down to 1,641 names. Hasani complains that Kosovar authorities are not doing enough to find and free his sons.

“According to the information I have, they are alive,” he said.

Kosovo declared independence in 2008, and Serbia does not recognize it as a separate state. Tensions between the two remain high. But efforts to identify remains from both sides of the brutal war have gone on in both Serbia and Kosovo to determine if missing individuals can be declared dead and the remains repatriated to the respective country.

The head of the European Union Rule of Law Mission established in Kosovo after the independence declaration, Lars-Gunnar Wigemark, called the unanswered questions of families with missing relatives “one of the most devastating legacies of the conflicts in former Yugoslavia.”

“Searching for the missing after an armed conflict is a painful, complicated and time-consuming process,” Wigemark said. “There needs to be willingness from both sides to share information, to move forward and to solve cases, despite the difficulties.”

The EU mission has conducted 651 field operations over about a decade, resulting in the identification of the remains of 311 individuals previously listed as missing.

Javier Naranjo, a forensic archaeologist who has worked in Kosovo for three years, said that during the war “perpetrators hid the bodies in smaller, clandestine graves, even in cemeteries, to make the search for missing people more difficult.”

The ongoing work is hampered by the lack of credible information on the location of the graves, the deaths of witnesses as time goes on and the fear of people with information to share from the traumatic past. Some families of the missing refuse to provide samples for DNA analysis.

The list of the missing prepared in cooperation with international institutions after the war includes ethnic Serbs as well as Albanians. Arsim Gerxhaliu, an expert at the Kosovo Institute of Forensic Medicine, said seven of the 10 war dead the lab identified last year were Serbs.

“The international community should exert more pressure on the Serbian government to tell us where the graves are,” Gerxhaliu said.

Forensic work that uses satellite imagery to locate possible remains is expected to be completed this summer at a large quarry site in southern Serbia.

While hundreds of thousands of ethnic Albanians ended up as refugees after the war, Hasani lives with his wife and niece in a village in the mainly ethnic Serb-populated northern part of Kosovo, not far from Serbia’s border.

He says his sons were not members of the Kosovo Liberation Army, the armed separatist group that fought against Serb forces and whose leaders a special tribunal is investigating for alleged war crimes against ethnic Serbs in Kosovo.

For years, Hasani’s family has been in contact with two Serbs who told them that after the four brothers were detained in Kosovo, they were imprisoned in the eastern Serbian city of Pozarevac, then in the capital of Belgrade, again in Pozarevac and then somewhere unknown.

Hasani’s granddaughter Agnes, the daughter of his oldest son, Fadil, was only a few months old when her father disappeared. Now a 21-year-old law student, she says her father and uncles committed no crime.

Like her grandfather, she is convinced they are imprisoned and that normalization of Kosovo’s relations with Serbia is the key to their release.

“My father will come back, if relations with Serbia improve,” she says.

Image: In this Monday, May 4, 2020 photo, Halil Hasani displays four photos of his missing sons from right to left Fadil, 32, Gazmend , 24, Armend, 20, and Hasan, 15, taken by Serb forces during the Kosovo war over two decades ago, as he sits in the porch of his house in the village of Qabra. Hasani is convinced his four sons are alive and imprisoned somewhere in Serbia more than two decades after police and paramilitary forces took them from a village in Kosovo. At the time, an armed uprising by ethnic Albanian separatists had led to a bloody Serb crackdown, an international crisis and a NATO bombing campaign in Kosovo, then a Serbian province. (AP Photo/Visar Kryeziu)