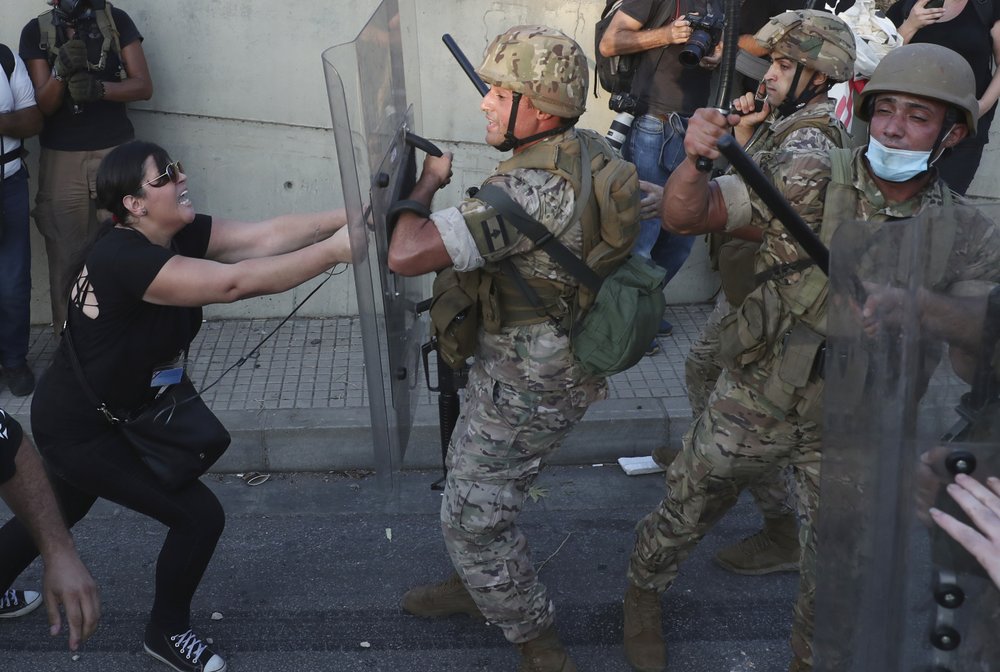 BEIRUT (AP) — Lebanese soldiers on Saturday fired rubber bullets and live rounds in the air to disperse hundreds of protesters trying to march to the presidential palace during an anti-government demonstration.

Tension is high in Lebanon following last month’s devastating explosion at Beirut’s port that killed nearly 200 people, and after another mysterious and huge blaze at the same site Thursday.

The Aug. 4 explosion was caused by the detonation of nearly three thousand tons of ammonium nitrates that had been improperly stored at the port for years. More than five weeks later, it is still not clear what started the fire that ignited the chemicals, and no one has been held accountable so far.

The explosion, which created a massive shockwave that shattered glass and blasted windows, doors and injured 6,500 people, came on top of an unprecedented economic and financial crisis blamed on decades of corruption and mismanagement by the country’s political class.

Protesters had called for the march Saturday to the presidential palace in the suburb of Baabda to express their anger and call for accountability. Supporters of President Michel Aoun called for a counter-protest at the same location, adding to the tension.

Hundreds of Lebanese soldiers separated the two camps. Later, as anti-Aoun protesters attempted to break a security cordon blocking their path on the highway leading to the palace, troops fired at first live rounds in the air, then rubber bullets, in an effort to disperse them.

Some protesters threw stones and tree branches at the troops, injuring several of them. Some sat in the middle of the highway vowing to stay there. A group climbed on a sign post and hung ropes tied into nooses.

Some soldiers threw stones and sticks back at protesters, and pointed their M-16 machine guns at them as well. The military later issued a statement saying it had to form a human barrier to separate the two groups of demonstrators near the presidential palace, and was forced to fire in the air after protesters pelted soldiers with stones and beat them with sticks in an attempt to reach the presidential palace.

The public blames the corruption and negligence of Lebanon’s politicians, security and judicial officials, many of whom knew about the storage of the chemicals that exploded and did nothing.

Image: An anti-government protester clashes with Lebanese soldiers, during a protest against the Lebanese President Michel Aoun near the presidential palace, in Baabda east of Beirut, Lebanon, Saturday, Sept. 12, 2020. Soldiers fired rubber bullets and live rounds in the air to disperse hundreds of protesters trying to march to the presidential palace during an anti-government demonstration. (AP Photo/Bilal Hussein)