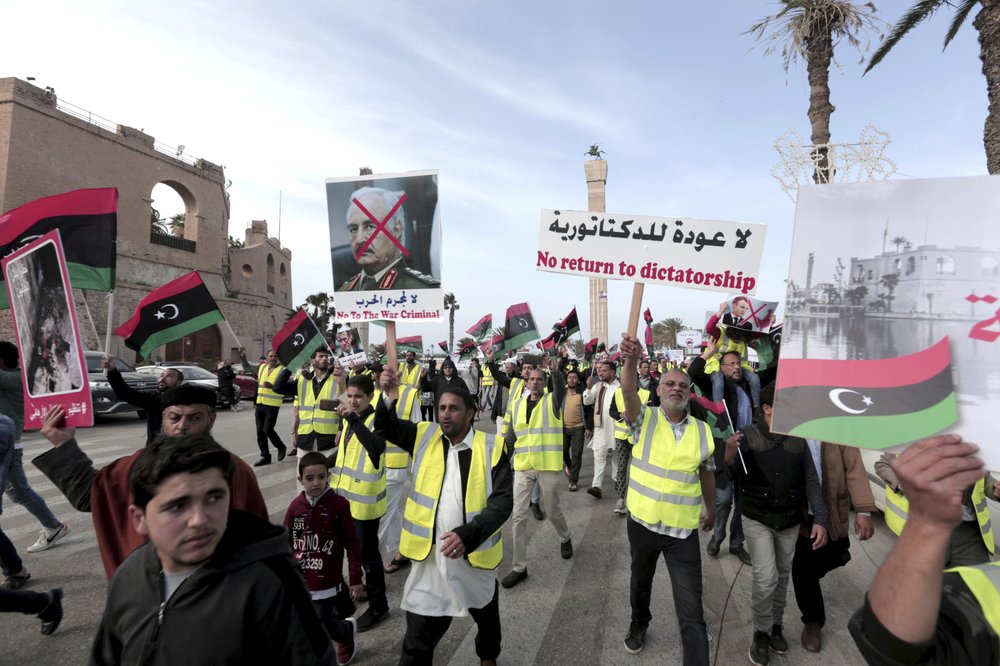 TRIPOLI, Libya (AP) — Officials in Libya’s U.N.-supported government say they plan to confront Moscow over the alleged deployment of Russian mercenaries fighting alongside their opponents in the country’s civil war.

Libyan and U.S. officials accuse Russia of deploying fighters through a private security contractor, the Wagner Group, to key battleground areas in Libya in the past months.

They say the Russian fighters are backing commander Khalifa Haftar, whose forces have been trying for months to capture the capital Tripoli. The U.N.-supported Government of National Accord is based in Tripoli.

The GNA has documented between 600 to 800 Russian fighters in Libya and is collecting their names in a list to present to the Russian government, according to Khaled al-Meshri, the head of the Tripoli-based government’s Supreme Council of State.

“We are going to visit Russia after we collect all evidence and present to the authorities and see what they say,” al-Meshri told The Associated Press last week. He did not say when that visit would take place.

Moscow has repeatedly denied playing any role in Libya’s fighting.

Haftar’s self-styled Libyan National Army — made up of army units, ultraconservative Salafists, and tribesmen — launched its offensive on Tripoli in April after seizing much of eastern Libya from Islamic militants and other rivals in recent years. Haftar is backed by the United Arab Emirates and Egypt, as well as France and Russia, while the Tripoli-based government receives aid from Turkey, Qatar and Italy.

Libya was plunged into chaos when a NATO-backed uprising toppled longtime dictator Moammar Gadhafi in 2011. The country is now split between a government in the east, allied with Haftar, and the GNA in Tripoli in the west. Both sides are bolstered by militias. Fighting has stalled in recent weeks, with both sides dug in and shelling one another along Tripoli’s southern reaches.

U.S. Assistant Secretary of State for Near East Affairs David Schenker told reporters last week that the State Department is working with European partners to impose sanctions on the Russian military contractor responsible for sending fighters to Tripoli.

“The way that this organization of Russians in particular has operated before raises the specter of large-scale casualties in civilian populations,” he said.

Schenker’s comments came shortly after U.S. officials met with Haftar to press for a cease-fire and “expressed serious concern” over Russia’s intervention in the conflict.

Trump voiced support of Haftar when he launched his attempt to take over Tripoli, praising the commanders “anti-terrorism” efforts in a phone conversation. The call was a sharp break with the U.S. policy of supporting Libya’s Tripoli-based Prime Minister Fayez Sarraj.

Haftar’s offensive dealt a blow to U.N. efforts to bring warring parties together. Al-Meshri called for confidence-building measures and a push toward presidential and parliamentary elections.

“Since Gadhafi’s ouster, there have been no presidential elections. People are fed up,” he said.

The Russians’ presence has further mired an already complex conflict.

Al-Meshri maintains his administration has strong evidence that there are Russians fighters on the ground.

He says that government forces have found cell phones, intercepted communications and seized personal belongings left behind in the chaos of battle. He said flight data show dates and names of Russians moving from Syria to Egypt and then the Jordanian capital of Amman before flying to the eastern Libyan city of Benghazi, Haftar’s seat of power. He didn’t elaborate or present any of these documents or items to the AP.

Wagner Group is believed to have sent mercenaries to multiple conflicts, including Syria, Ukraine and elsewhere, raising accusations that Moscow is using it to spread its influence. The firm is a military contractor run by Yevgeny Prigozhin, a businessman with close ties to the Kremlin. Russian officials have refused in the past to comment on the firm’s activities.

By deploying fighters into Libya, Russia is embroiling itself in another conflict in the Middle East. Russia’s military is involved in Syria’s civil war, conducting airstrikes and deploying troops and military police. That operation successfully shored up Syrian President Bashar Assad’s government and — at a relatively modest cost — helped Moscow expand its clout in the region.

Analysts believe that Russian President Vladimir Putin is trying to find leverage with Western powers in oil-rich Libya. They say he also recognizes that the country is a gateway for many migrants trying to reach European shores.

“Most of this is smoke and mirrors designed to induce fear,” said Anas Gamati, founder of the Tripoli-based Sadeq Institute. “Russian influence has done only two things: inflate their size and specter of their power in Libya. They’re not positively engaged or trying to play a constructive role with diplomatic or political value.”

Officially, Russia continues to maintain a dialogue with both sides. Haftar has visited Moscow several times the past years, and al-Meshri was part of a GNA delegation that met with Putin during a Russia-Africa summit in Sochi in March.

The allegations of Russian interference come amid a renewed push for international players to reach a consensus on Libya.

Germany is working with the United Nations to host a conference on Libya by early 2020. Observers hope that international players could exert enough pressure to stop the fighting.

But others worry that Haftar’s appetite for territory and power might prove too large. Former GNA defense minister Mahdi al-Barghathi, who left in the government in July, says the only way toward peace is for Haftar to be left with no powerful friends, and no other options. Otherwise, al-Barghathi said Haftar will be set to become another Gadhafi.

“We don’t want to go back to square one,” he said.

As long as international powers remain divided, Libya’s conflict risks continuing to play out as the world’s latest proxy war, some observers warn.

“Putin would like nothing more than to keep Europe busy and divided over Libya, scared of illegal immigration, paralyzed by right-wing populism that threatens the very idea of the EU,” said Mohammed Eljareh, an analyst who runs Libya Outlook, a consulting company on Libyan affairs.

“All of this is music to Putin’s ears,” he said.