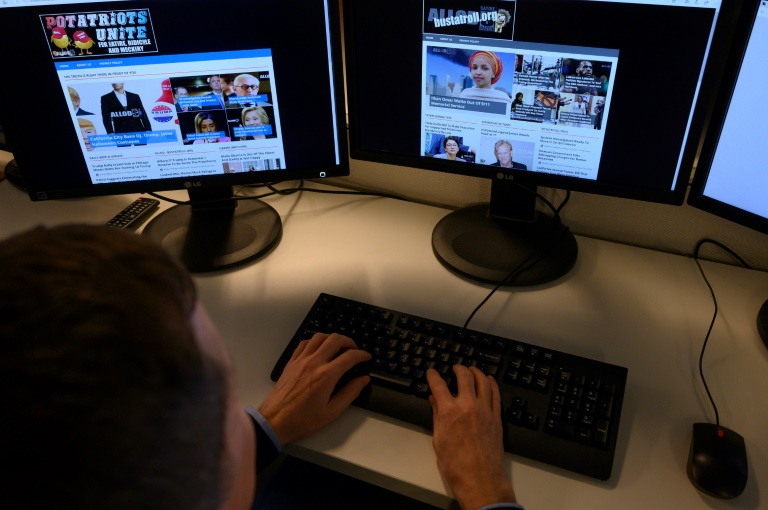 Christopher Blair produces false stories he insists are easily identifiable as satire rather than news. His pages can rack up millions of views, and at least part of that audience believes the material is true.

Blair, 48, runs eight websites and five Facebook pages from his home in the northeastern US state of Maine. He says the claims his articles make are “ridiculous,” such as that President Donald Trump’s current term could be extended by three years.

But his content is widely shared by people who take it as fact, contributing to the spread of false information online.

Blair — a self-described “liberal troll” and political activist — says he knows what to write for his right-wing “target audience” through years of “being embedded in their world.”

He does not hold that audience in high regard.

“They live on… fear and hate and misinformation and very specific storylines that everybody knows aren’t true except for them,” he told AFP.

His content is rife with disclaimers: Satire. Fake news fact-check. Nothing on this page is real.

If someone clicks through to Blair’s articles, instead of instantly sharing them based on a headline, the warnings are visible.

But often, it appears that people do not.

“These people are told that they’re sharing satire, and it doesn’t matter,” he says. “The truth is no longer important to them. All they care about is holding on to their hate and fear.”

The spread of false information is a significant problem in the run-up to the 2020 US elections, but Blair says his readers’ minds are already made up, and that his content is “not going to impact the vote.”

“You just get called names and told that you hate America,” he says.

So he turned to his current approach. It started out as “trolling for a good laugh,” but evolved into an effort to “to teach the truth to those who are otherwise unteachable.”

“The people who share our content don’t care about the truth. They share 500 things a day, most of which are hate-filled lies. When they share something of ours, there’s a chance at accountability,” he says.

According to Blair, this takes the form of “a group of a couple hundred trolls” who “patrol the pages,” make sure there is “accountability for the people commenting” and tell people they are sharing satire.

“These people, they absolutely do not respond to logic and reason, but they do respond to shame if they’re embarrassed by what they’ve done, by the fact that they’ve shared” it, he says.

Not everyone agrees that approach is helpful, or harmless.

“This type of content has a pervasive and eroding effect on our shared set of facts, and without that, it’s hard to remain a society that can come together and make collective decisions,” says Graham Brookie, director of the Atlantic Council’s Digital Forensic Research Lab, which focuses on identifying and exposing disinformation.

Of Blair’s tactics, Brookie says: “It is a pretty big assumption and risk when much of the audience shares based on headlines and even a highly engaged minority of his audience starts to believe him.”

Blair started “America’s Last Line of Defense” — which now has two regular contributors in addition to him — in 2016. He was a political blogger at the time, after previously working in home remodeling.

He earns ad revenue from what has become a network of sites — which he says had 26 million pages views in 2019 — but declined to specify how much.

Enough sites steal and repost Blair’s articles without the original satire disclaimers that he now has a system set up with a fact-checker to identify and report them — another opportunity for accountability, he says.

The process can eventually lead to those copying the content losing their ability to go viral.

Despite the contentious nature of the product, he says there are lines he will not cross, such as saying that the day of an election was changed.

Blair — who has been dubbed the “godfather of fake news” — has pulled several articles, including one that said the brother of Democratic congresswoman Ilhan Omar, who is Muslim, was a “9/11 terrorist, or something like that.”

“That was a bridge too far,” he says.

But other fake claims — including Omar walking out of a 9/11 memorial service, or former president Barack Obama fleeing to Kenya to avoid prosecution — are fair game.

Blair’s message to critics of his work appears in the “About US” section on his websites.

“If you can seriously read this stuff and think it can be passed off as real to reasonable people, you need to go out, right now, and buy a sense of humor and a clue,” it says.

“Keep your poutrage to yourself,” it adds, employing a portmanteau of “pouting” and “outrage.”