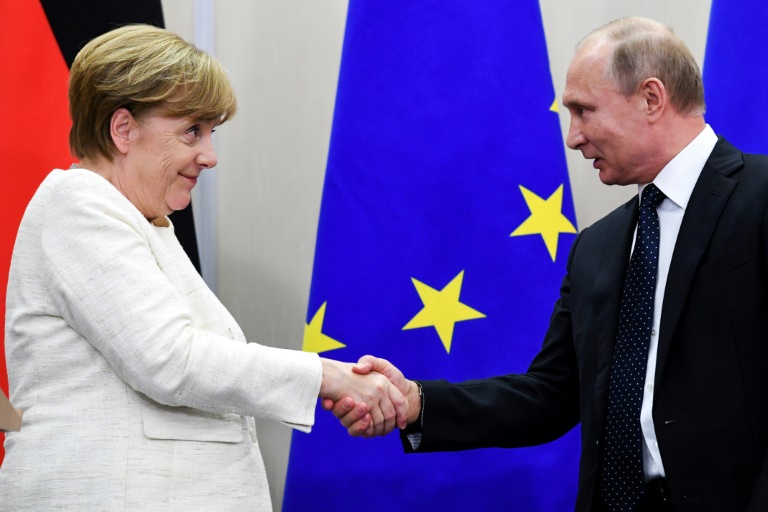 German Chancellor Angela Merkel met Russian President Vladimir Putin at the Kremlin on Saturday for talks set to focus on flashpoints in the Middle East.

Merkel and Putin shook hands at the start of the meeting which the German leader said would cover topics including turmoil in Libya and the Syria conflict as well as Ukraine’s war with pro-Russian separatists.

“There is a lot to discuss,” said Merkel, adding that “talking with one another is always better than talking about one another.”

Putin thanked the chancellor for visiting and said they would focus on “the hottest” topics. The leaders were set to give a press conference afterwards.

Germany and Russia said ahead of the talks that they would cover the confrontation between Washington and Tehran over the US killing of a top Iranian general and turmoil in Libya.

The visit by Merkel was her first to Russia since May 2018 when the leaders met at Putin’s Black Sea residence.

Putin visited Syria and Turkey this week and is keen to stress his role as a regional powerbroker.

German Foreign Minister Heiko Maas, who accompanied Merkel, said a “key reason” for the meeting was the escalating crisis in Libya, where Berlin is acting as a mediator in a conflict he has warned could become a “second Syria”.

“We are involving Europe and those players who are influential there, for that we need Russia,” Maas told Germany’s NTV television. “For us, it’s not too far to fly to Moscow to discuss that with Putin.”

Merkel is to invite Putin to a Berlin conference on Libya later this month, diplomatic sources told AFP.

Putin and Turkish President Recep Tayyip Erdogan called for a ceasefire in Libya on Wednesday, although they are seen as supporting opposing sides in the conflict.

While Turkey has sent troops to support the UN-backed Tripoli government, Moscow is accused of backing mercenaries supporting strongman Khalifa Haftar in his fight against the government.

Haftar said he would fight on despite the call for a ceasefire.

The Kremlin has said the talks will also cover the “escalation of tensions” in the Middle East after the US killed top Iranian commander General Qasem Soleimani in a drone strike close to Baghdad.

Putin warned the killing could “seriously aggravate the situation in the region”.

Iran, an ally of Moscow, responded with missile attacks on Iraqi bases housing American troops. It also accidentally brought down a Ukrainian passenger plane with missiles after mistaking it for a hostile target.

While Germany condemned the tit-for-tat violence and urged Tehran to end a “spiral” of conflict, Putin said using force would “not contribute to finding solutions to the complex problems in the Middle East”.

Tehran has announced a further rollback on its commitment to a 2015 nuclear accord following the United States’ unilateral withdrawal in 2018. Russia and Germany are among world powers still backing the deal.

The Moscow meeting with Merkel also comes after Putin in December took part in talks on the Ukraine conflict in Paris in the “Normandy format” hosted by Merkel and French President Emmanuel Macron. This was his first face-to-face meeting with his recently-installed Ukrainian counterpart Volodymyr Zelensky.

The war with Moscow-backed separatists broke out after Russia’s 2014 annexation of Crimea and has killed more than 13,000 people.

Ukrainian Foreign Minister Vadym Prystaiko tweeted on Friday that he had spoken to Maas about the Ukraine conflict and was “waiting for news” to emerge from the talks.

Image: AFP/File / Kirill KUDRYAVTSEV Libya and Iran will top the agenda for talks in Moscow between German Chancellor Angela Merkel and Russian President Vladimir Putin (pictured in Sochi in May 2018)