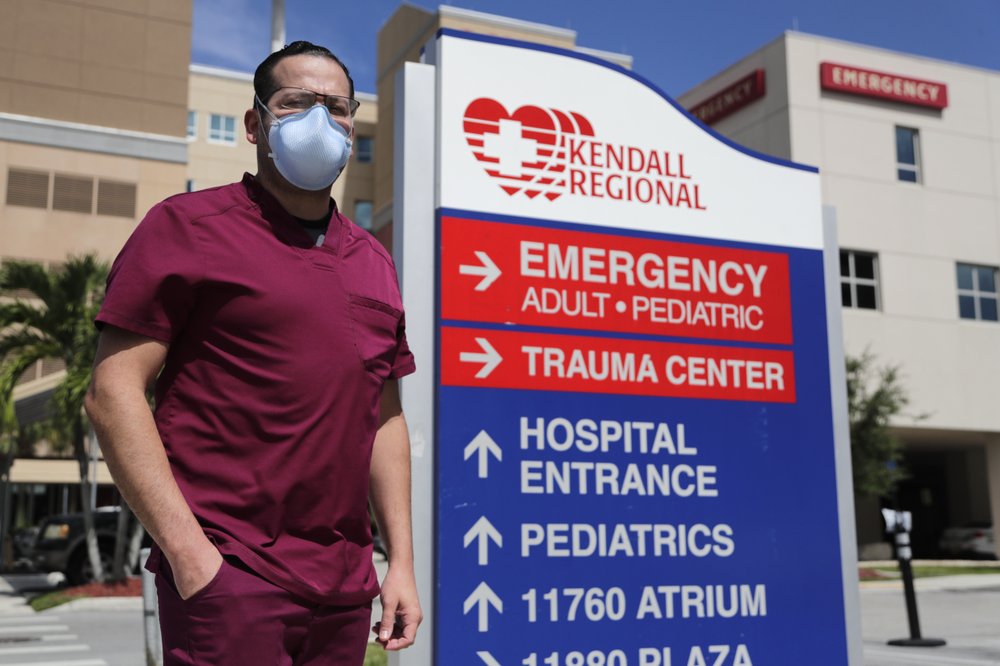 FORT LAUDERDALE, Fla. (AP) — Their final breaths are tormented. Rublas Ruiz has seen too many of them — the last gasps of 17 men and women who died of the coronavirus.

“The fear in their eyes when they can’t get enough air. They are so scared,” he says, quietly. “Their eyes are big, desperate to get the oxygen and that makes me so sad.”

He sits on their bed, grasps their hand, strokes their cheek and prays. Anything to soothe them.

“I know you cannot talk, but I’m going to talk to you,” he tell them. “You have to be positive, you have to have faith that God is going to get you out of this.”

Often, he ducks away to sob in the bathroom. It is a rare moment alone, when he can cast off the brave countenance.

Then he splashes water on his face and returns to the floor that has been his work home since March. While other nurses rotate in and out of the COVID-19 ICU unit to limit their exposure to the deadly virus, he’s asked to stay permanently.

“Many nurses have left. They don’t want to deal with it, they’re afraid, they’re scared, they see other people getting infected.”

Miami-Dade County has been the epicenter of the state’s outbreak with about 2,000 deaths since March — more than 20 percent of the state’s total. As Florida cases skyrocketed this summer, Miami hospitals were especially overloaded in the second half of July.

For Ruiz, his routine is the same every day. He prays in the car on the way to the hospital: “Dear God, this is your day, put me in your hands and help me do what you want me to do. This is your creation and let me help you out.”

Then, he says, “I take a deep breath when I get out of the car and go to battle.”

As many as 10 patients have died in his ward in a single week.

At one point, he started counting, “and then I stopped doing that because there were so many.”

Right now, he can’t stop thinking about the 45-year-old father who has been intubated for more than two weeks, “seeing this young guy almost my age, just four years older than me …”

His voice trails off. “We know he’s not going to make it.”

The hardest part is watching them die alone.

Playing the role of family has become almost more important than his nursing responsibilities. He tried to distract an elderly patient from searching for virus treatments on the Internet by asking him questions about his work as an inspector for the Department of Motor Vehicles.

Ruiz could sense the retired man’s fear: “He was looking really, really sad and then that also made me cry that day.” His condition deteriorated in less than a week, and he died.

He tries to connect patients with loved ones as much as possible through video chats. But ultimately, he’s the one bearing witness to their final breaths.

“I have never seen in my life so many deaths, in a week or a month,” he says. “The room gets empty and another patient comes in.”

On the way home, he can’t stop thinking about the patients he left behind. Will he see them tomorrow?

He steps into a makeshift changing room in the garage, removes his hospital scrubs and heads straight to the shower, praying he doesn’t infect his wife and 10-year-old daughter. He tries not to think about that. It’s too much to bear.

The tween is dejected, isolated from friends, missing school and deeply disappointed the over the cancellation of an Ariana Grande concert that would have been the highlight of her year.

Ruiz tries hard to separate his grim work when he’s home, but it seeps in. He relies heavily on the positive energy of his wife of six years, Yaneth.

“He has been quite depressed,” she says. “We have good communication. I try to listen to him. I know he’s stressed.”

His wife lost her job as a hairdresser so Rublas takes extra shifts to make up for their lost income. The family has taken up fishing as a hobby, casting their reels off a bridge, catching snapper and enjoying the peace of being outside and together.

Back in April, Yaneth prepared a special birthday dinner for him at home. But when he sat at the table, the thought of losing so many patients overwhelmed him. And he broke down in tears.

Image: Rublas Ruiz poses for a photograph outside of Kendall Regional Medical Hospital where he works as a nurse in the hospital’s intensive care unit, Tuesday, Aug. 11, 2020, in Miami. While other nurses rotate in and out of the COVID-19 ICU unit to limit their exposure to the deadly virus, Ruiz has asked to stay permanently. (AP Photo/Lynne Sladky)

Mounting US deaths reveal an outsize toll on people of color