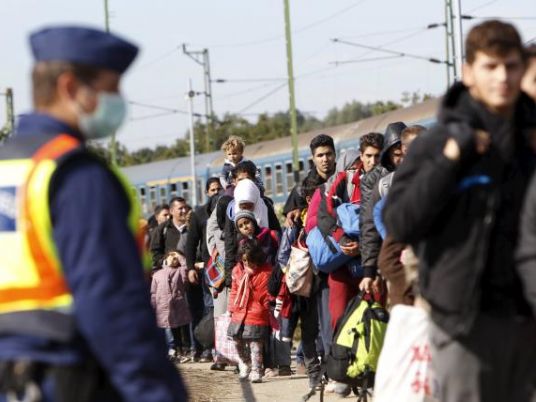 A small gap in coils of newly laid razor wire is all that remains of the Zakany-Botovo border crossing between Hungary and fellow European Union member Croatia, as Budapest prepares to close off another route for migrants flocking to Europe.
Heavy machinery is clearing trees and a 3-meter-high fence is taking shape along the line of the razor wire.
The border, still traversed by thousands of migrants daily en route to Austria and Germany, could be sealed in a matter of minutes, potentially diverting the migrants into tiny Slovenia or stranding them in Croatia, where authorities are struggling with the scale of the influx.
Prime Minister Viktor Orban, who has already thrown up a fence to shut down the migrant route over Hungary's southern border with Serbia, said last week the closure was imminent, and speculation is rife that it might follow his return from the United Nations General Assembly in New York on Thursday.
Border crossings have been fitted with gates of steel and concrete.
At the Zakany train station, military armored personnel carriers guard a train car, one side of which has been covered in razor wire in what appears to be a replica of the wagon used to close the main migrant route from Serbia.
The closure of that stretch of Hungary's border saw violent clashes between police firing tear gas and water cannon and young, male migrants lobbing stones and smashed concrete.
The European Union is moving ahead with a plan, opposed by Hungary and several other eastern, ex-Communist members of the bloc, to distribute 120,000 refugees, many of them Syrians, between its members.
But that is just a portion of this year's influx of migrants, which the UN refugee agency said on Thursday may reach 700,000 and possibly more in 2016, in the greatest movement of people in Europe since World War Two.
Orban, one of Europe's most vociferous opponents of immigration, says he need not wait for the fence to be completed before he orders the crossings closed. Razor wire would suffice.
Fast-flowing river
"We need not wait for the completion of the second layer to order the closure of the green border," he told a news conference last week.
"We cannot wait for an as-yet-unborn common European policy. Once everyone understands what the Hungarian intention is and they can prepare that the Serbian-Hungarian border status quo will extend to the Croatian-Hungarian border, we will put those rules in effect to enforce EU laws on border crossing."
The razor wire runs the length of Hungary's border with Croatia, including along sections that follow the Drava river, a fast-flowing artery that some migrants may be tempted to swim.
Unlike Hungary, Croatia is not a member of Europe's Schengen zone of passport-free travel.
Relations between the two countries have soured considerably since the migrants began flowing into Croatia after Hungary shut down their route from Serbia, reflecting the discord and recrimination running through the European Union.
Closing the Croatia-Hungary border crossings may force Croatia to transport more migrants into Slovenia, a former Yugoslav republic of 2 million people that says it can manage an influx of 10,000 per day.
It will likely lead to a backlog at Croatia's eastern frontier with Serbia, crossed by thousands every day in sometimes chaotic and desperate scenes. Croatian officials have declined to comment on what might happen if or when Hungary seals the border.
For now, the flow from Croatia into Hungary and on to Austria is unbroken, efficient even.
Police, ambulance crews and aid workers await trainloads of migrants on the Croatian side, handing them bread, water, canned fish and an apple each before they stride across the bridge over the Drava. Lines of migrants snake through riverside shrubs to a gap in the razor wire, where Hungarian police officers and a waiting train greet them.
Anil Safia, an 18-year-old boxer from Afghanistan, devoured the bread and fish.
"I'm sorry I have to eat while I talk," he told a reporter, "but I have not had anything for a day and I need to maintain my weight, you know."