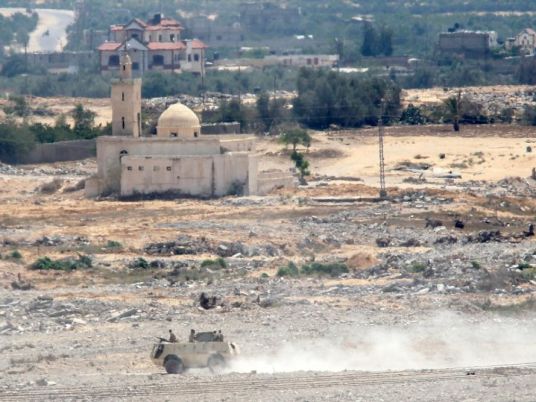 Suspected Islamic militants gunned down a Coptic Christian teacher on his way to school in northern Sinai on Thursday, the second killing of a Christian in less than a week in the turbulent region, officials said, amid fears of escalating attacks on Christians.

Gamal Tawfiq, 50, was shot in the head by two militants on a motorbike who followed him as he walked from home to work at el-Samran School in the coastal city of el-Arish. There was no immediate claim of responsibility for the killing, but a security official said the Islamic State's affiliate in Sinai was the prime suspect.

A school official confirmed Tawfiq's death to The Associated Press but declined to give details. Both officials spoke on condition of anonymity because they were not authorized to speak to reporters.

On Sunday, suspected militants gunned down a local vet, Bahgat Zakher, in al-Arish, and in late January, Wael Milad, a merchant, was killed by militants who stormed his shop. Both were Coptic Christians.

Egypt is home to one of the world's oldest Christian communities, accounting for roughly 10 percent of its 92 million people. The Copts have long complained of discrimination and have frequently been targeted by Islamic militants. IS claimed responsibility for a suicide bombing in a packed Coptic church in Cairo in December that killed nearly 30 worshippers.

Since the 2011 uprising that ousted autocrat Hosni Mubarak, northern Sinai has plunged deeper into strife, with Islamic militants gaining a strong foothold. The insurgency in Sinai grew deadlier and, in some cases, spread to the mainland following the military's 2013 ouster of the country's Islamist president, Mohammed Morsi.

Most Egyptian Christians, along with many of the country's Muslim majority, supported Morsi's ouster, thus inviting retaliation by the militants.

"For long, incidents of shooting and killing Christians were sporadic, but recently we are witnessing an increase that I think will turn into a repetitive pattern in al-Arish," said Ishaq Ibrahim, a researcher at the Egyptian Initiative for Personal Rights.

Last year, several Christians were shot to death in attacks, including in Sinai, where priest Rafael Moussa and health ministry employee Massak Nasrallah were gunned down.

In May last year, an elderly Christian woman was stripped off her clothes and paraded naked through the streets of a southern village by a Muslim mob who accused her son of having an affair with a Muslim woman.

Egyptian prosecutors threw the case out last month, citing lack of evidence, but authorities reversed the decision this week after the woman's defense appealed. The suspects were also referred to a criminal court.