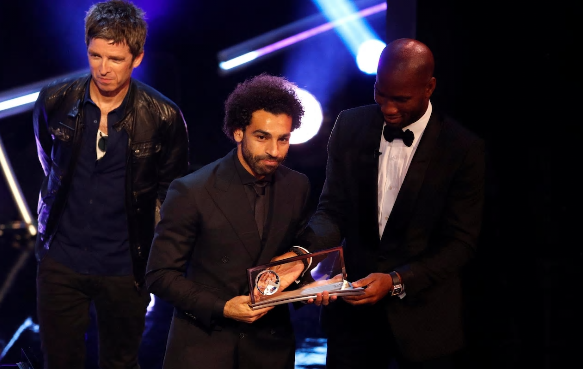 Egyptian sensation and Liverpool star Mohamed Salah was given FIFA’s 2018 “Puskas Goal of the Year” award on Monday night, for his strike against Everton, beating legends Cristiano Ronaldo and Gareth Bale to the title. The award goes to the player who scored the most aesthetically pleasing goal in world football, over the past year.

Unfortunately for Salah’s fans, the rest of the night at FIFA’s awards ceremony in London did not go his way. Luka Modric was named “Men’s Player of the Year”, after tensely sharing the award’s shortlist with Salah and Cristiano Ronaldo.

Ronaldo, who was not present for the ceremony, did not not win any awards.

YES MO!! 🔥👑@MoSalah's stunning strike against @Everton has been voted as the FIFA #Puskás Goal of the Year. #TheBest #FIFAFootballAwards pic.twitter.com/aIg2rTSiEB

On his Puskas win, Salah gave a short speech thanking those who supported him: “Nothing to say much about this, but I am very happy and very proud. I have to thank everyone who voted for me, and I am looking forward to the other award tonight!” he concluded.

Liverpool took to Twitter, congratulating the Egyptian King on yet another impressive win.

Salah’s win comes as no surprise as the Liverpool forward led a stellar season, coming out as the top Premier League scorer, as well as leading his team to the Champions League final.

Salah also swept a number of major awards, from the prestigious Golden Boot to BBC’s African Player of the Year (2017), while being shortlisted for such titles as the “Best Champions League Forward”, alongside Ronaldo and Messi.

Meanwhile, Modric has had an equally impressive season, winning the UEFA Champions League with Real Madrid, and bringing dark horse Croatia to 2018’s World Cup Final. He also won the tournament’s “Golden Ball” for best player, as he led his team to shock victories over the likes of Russia and England.

FIFA will announce player of the year this evening