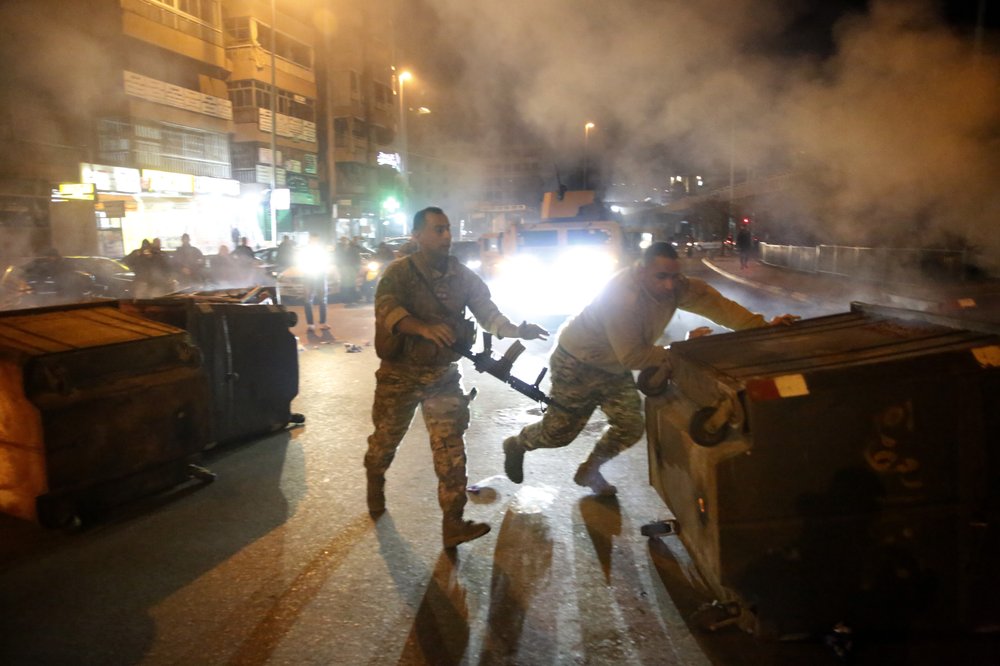 BEIRUT (AP) — A new Cabinet was announced in crisis-hit Lebanon late Tuesday, breaking a months-long impasse amid mass protests against the country’s ruling elite and a crippling financial crisis, but demonstrations and violence continued.

Hassan Diab, a 60-year-old former professor at the American University of Beirut, announced a Cabinet of 20 members — mostly specialists supported by the Shiite group Hezbollah and allied political parties.

The new government, which comes three months after former Prime Minister Saad Hariri resigned, was rejected by protesters who have been calling for sweeping reforms and a government made up of independent technocrats that can deal with the country’s economic and financial crisis, the worst since the 1975-90 civil war.

Even before the Cabinet was announced, thousands of people poured into the streets, closing major roads in the capital of Beirut and other parts of the country in protest. The protesters complained that political groups still were involved in the naming of the new ministers, even if they are specialists and academics. Later, a group of protesters near Parliament threw stones, firecrackers and sticks at security forces, who responded with tear gas and pepper spray.

“We want a government of experts … who are they kidding?” said one protester, Fadi Zakour. “We have been protesting for 90 days and we are not happy to close roads,” he added.

Diab saluted the protesters in the street and vowed to “work to fulfill your demands.” In a speech addressing the country following the government announcement, he added that his Cabinet is the first government in the history of Lebanon to be made up entirely of technocrats and insisted the 20 ministers are specialists who have no political loyalties and are not partisan.

He appealed to citizens to help the government implement a “rescue program” and said this Cabinet has the “capability and qualifications, will and commitment” to carry it through.

U.N. Secretary-General Antonio Guterres welcomes the formation of a new government and looks forward to working with Diab and the incoming Council of Ministers, “including in support of Lebanon’s reform agenda and to address the pressing needs of its people,” U.N. spokesman Stephane Dujarric said.

“The secretary-general reiterates the United Nations commitment to support Lebanon’s strengthening of its sovereignty, stability and political independence,” Dujarric said. For three months, the leaderless protests have been calling for a government made up of specialists that can work on dealing with the economic crisis. The protests have recently turned violent, with around 500 people injured in confrontations between protesters and security forces over the weekend.

Although the government announced Tuesday is technically made up of specialists, the ministers were named by political parties in a process involving horse trading and bickering with little regard for the demands of protesters for a transparent process and independent candidates.

Still, among the ministers named were accomplished academics and six women, including the minister of defense and deputy prime minister. The number is a record for Lebanon, with women now holding more than quarter of the Cabinet posts, including those of defense, justice, labor, youth and sports and the displaced.

“The independence of justice will be among our top priorities and I will put all my efforts to move in this direction,” Justice Minister Marie-Claude Najm told local LBC TV.

Analysts said the new government, being politically aligned with the Iranian-backed Hezbollah group, would likely have difficulty drumming up international and regional support needed to avoid economic collapse.

“The Cabinet includes a fair number of capable technocrats, but it does not have any political independence to speak of,” wrote Paul Salem, president of the Middle East Institute.

“This government is likely to be short lived, to preside over a steep decline in the economy, a dangerous swerve in the state’s security relationships, and growing social and political unrest in the country,” he predicted.

Lebanon has been without a government since Hariri resigned Oct. 29, two weeks into the unprecedented nationwide protest movement.

Diab dismissed accusations that his was a government made up of one political camp consisting of Hezbollah and its allies, insisting it was the government of all of Lebanon. He also said it was natural to consult with political parties on the names of ministers, because in the end they are the ones that will decide the vote of confidence in Parliament needed for the Cabinet.

Diab said his first visit as prime minister will be to the Arab region, particularly to the Gulf Arab countries — a nod to Saudi Arabia, which was the main backer of former Prime Minister Saad Hariri. Backing from oil-rich Gulf countries is badly needed in Lebanon that has one of the highest debt ratios in the world.

He said the government would get to work immediately and hold its first meeting Wednesday.

Panic and anger have gripped the public as the Lebanese pound, pegged to the dollar for more than two decades, plummeted in value. It fell more than 60% in recent weeks on the black market. The economy has seen no growth and flows of foreign currency dried up in the already heavily indebted country that relies on imports for most basic goods.

Shortly before the Cabinet was announced Tuesday night, the Syndicate of Money Changers in Lebanon issued a statement saying it had agreed to set the exchange rate at a maximum of 2,000 Lebanese pounds to the dollar, after it reached 2,500 pounds to the dollar last week. The official price still stands at 1,507 to the dollar.

Violence escalates in Beirut as protesters clash with police