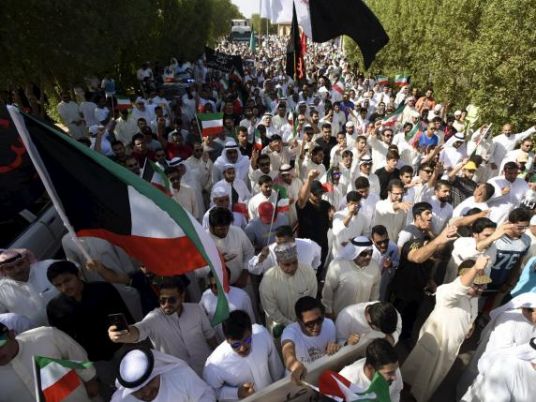 Kuwait has detained 60 people and closed a local charity for alleged violations in raising funds for Syrians, local media said Tuesday, as part of a crackdown on suspected militant links after the Gulf Arab state's worst ever suicide bombing.
Kuwait has stepped up security after a suicide bomber who flew in from Saudi Arabia blew himself up inside a Shi'ite Muslim mosque during Friday prayers, killing himself and 26 other people. Kuwaiti officials said the attack was aimed at stirring up sectarian strife in the majority Sunni Muslim state.
Arabic-language al-Qabas newspaper quoted security sources in the major oil exporting state as saying that 60 people, including Kuwaiti citizens and nationals of other Gulf states, were being held for investigation by security services.
Some had been found to have been in contact with Sunni Islamist militants with others suspected of belonging to "extremist" groups, al-Qabas reported, without elaborating.
It also said that five people suspected of involvement in Friday's mosque bombing by Saudi national Fahd Suliman Abdul-Muhsen al-Qabaa had been referred to the public prosecutor. The five, it said, had confessed to receiving financial transfers from abroad to carry out attacks targeting houses of worship.
Al-Qabas did not name them but Kuwait's interior ministry has said it had detained the driver of the vehicle that took Qabaa to the Shi'ite mosque, the owner of the car and the owner of the house where the driver went to hide after the attack.
Kuwaiti authorities were not imemdiately available for comment on the al-Qabas report.
Relations have traditionally been good between the 70 percent of Kuwait's 1.4 million citizens who are Sunni Muslims and the Shi'ites who comprise 30 percent, but regional rivalry between Sunni Saudi Arabia and Shi'ite Iran has opened some fissures.
Al-Rai daily, another Arabic-language newspaper, said the Ministry of Labour and Social Affairs permanently closed down the Fahd al-Ahmed charity on Sunday due to "repeated violations despite the warnings".
Quoting a source at the ministry, al-Rai said that the ministry had repeatedly asked the charity to comply with regulations stipulating that funds for Syrians be collected through official channels.
Officials from the charity were not immediately available to comment on the report.
US Treasury Under Secretary for Terrorism and Financial Intelligence David Cohen has described Kuwait as "the epicentre of fund-raising for terrorist groups in Syria."
The Islamic State militant group issued an audio clip purporting to be a posthumous statement by the bomber, in which he criticises Shi'ites, "especially in Kuwait", for what he termed insults to Islam.
The bombing has sharply heightened regional security concerns because Islamic State appears to be making good on its threat to step up attacks in the holy fasting month of Ramadan.