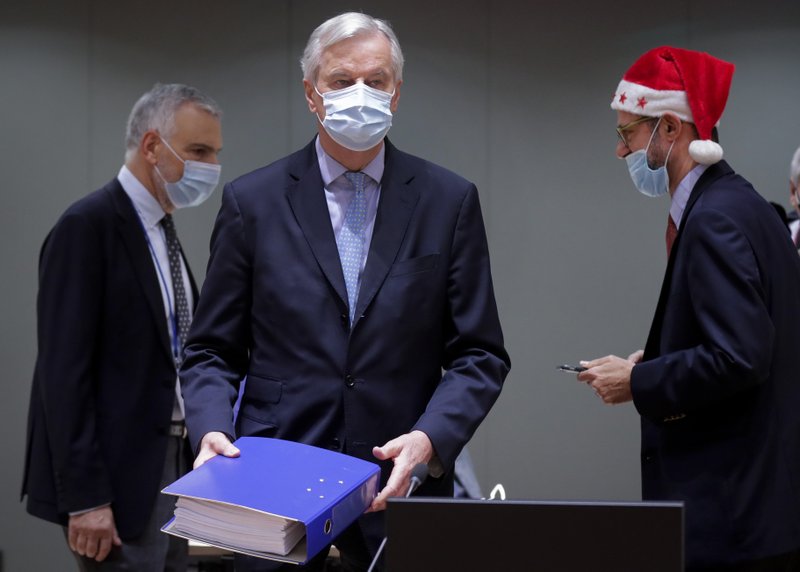 BRUSSELS (AP) — The fast-track ratification of the post-Brexit trade deal between the U.K. and the European Union got underway on Christmas Day as ambassadors from the bloc’s 27 nations started assessing the accord that takes effect in a week.

At Friday’s exceptional meeting, the ambassadors were briefed about the details of the draft treaty, which is believed to be around 1,250 pages long, by the EU’s chief Brexit negotiator Michel Barnier.

They are set to reconvene again on Monday and have informed lawmakers at the European Parliament that they intend to take a decision on the preliminary application of the deal within days.

While voicing their sadness at the rupture with Britain, EU leaders are relieved that the tortuous aftermath of the Brexit vote had come to a conclusion in Thursday’s agreement about future trade ties.

All member states are expected to back the agreement as is the European Parliament, which can only give its consent retrospectively as it can’t reconvene until 2021. British lawmakers have to give their approval, too, and are being summoned next week to vote on the accord.

Both sides claim the agreement protects their cherished goals.

British Prime Minister Boris Johnson said it gives the U.K. control over its money, borders, laws and fishing grounds. The EU says it protects its single market of around 450 million people and contains safeguards to ensure the U.K. does not unfairly undercut the bloc’s standards.

Johnson hailed the agreement as a “new beginning” for the U.K. in its relationship with European neighbors. Opposition leaders, even those who are minded to back it because it’s better than a no-deal scenario, said it adds unnecessary costs on businesses and fails to provide a clear framework for the crucial services sector, which accounts for 80% of the British economy.

In a Christmas message, Johnson sought to sell the deal to a weary public after years of Brexit-related wrangling since the U.K. voted narrowly to leave the EU in 2016. Although the U.K. formally left the bloc on Jan. 31, it remains in a transition period tied to EU rules until the end of this year.

Without a trade deal, tariffs would have been imposed on trade between the two sides starting Jan. 1. Both sides would have suffered in that scenario, with the British economy taking a bigger hit at least in the near-term, as it is more reliant on trade with the EU than vice versa.

“I have a small present for anyone who may be looking for something to read in that sleepy post-Christmas lunch moment, and here it is, tidings, glad tidings of great joy, because this is a deal,” Johnson said in his video message, brandishing a sheaf of papers.

“A deal to give certainty to business, travelers and all investors in our country from Jan. 1. A deal with our friends and partners in the EU,” he said.

Though tariffs and quotas have been avoided, there will be more red tape because as the U.K. is leaving the EU’s frictionless single market and customs union. Firms will have to file forms and customs declarations for the first time in years. There will also be different rules on product labeling as well as checks on agricultural products.

Despite those additional costs, many British businesses who export widely across the EU voiced relief that a deal was finally in place as it avoids the potentially cataclysmic imposition of tariffs.

“While the deal is not fully comprehensive, it at least provides a foundation to build on in future,” said Laura Cohen, chief executive of the British Ceramic Confederation.

One sector that appears to be disappointed is the fishing industry with both sides voicing their discontent at the new arrangements. Arguments over fishing rights were largely behind the delay in reaching an agreement.

Under the terms of the deal, the EU will give up a quarter of the quota it catches in U.K. waters, far less than the 80% Britain initially demanded. The system will be phased in over 5 1/2 years, after which quotas will be reassessed.

“In the end, it was clear that Boris Johnson wanted an overall trade deal and was willing to sacrifice fishing,” said Barrie Deas, chief executive of the National Federation of Fishermen’s Organizations.

The French government, which had fought hard for fishing access, announced aid for its fishing industry to help deal with the smaller quota, but insisted that the deal protects French interests.

The president of the French ports of Calais and Boulogne-sur-Mer, Jean-Marc Puissesseau, said no matter what is in the Brexit trade deal, life for his port will become more difficult because “there will no longer be free movement of merchandise.”

Some 10,000 jobs in the Boulogne area are tied to fishing and its seafood-processing industry, he said, and about 70% of the seafood they use comes from British waters.

“Without fish, there is no business,” he told The Associated Press.

By RAF CASERT and PAN PYLAS

Angela Charlton in Paris contributed to this report.

Image: A colleague wears a Christmas hat as European Union chief negotiator Michel Barnier, center, carries a binder of the Brexit trade deal during a special meeting of Coreper, at the European Council building in Brussels, Friday, Dec. 25, 2020. European Union ambassadors convened on Christmas Day to start an assessment of the massive free-trade deal the EU struck with Britain. After the deal was announced on Thursday, EU nations already showed support for the outcome and it was expected that they would unanimously back the agreement, a prerequisite for its legal approval. (Olivier Hoslet, Pool via AP)

Isolation of UK eases but backlog could take days to clear