This piece was written for Egypt Independent's final weekly print edition, which was banned from going to press. We offer you our 50th and final edition here.

After a year of covering the Middle East for the Washington Post, I joined Al-Masry Al-Youm in 2008.

A friend arranged for me to meet with the then-CEO Sherif Abdel Wadood, of whom I hadn’t heard before.

It was a quick meeting with the young business professional who co-founded the paper. It was very straightforward; he asked me to set up a multimedia department for the institution, emphasizing the liberal editorial policy of the paper and separation between management and editorial staff.

Months later, we had another meeting, during which he signed on, doubling our already tiny budget.

At a time the organization was recruiting young, new, media-oriented professionals, the model we adopted was converging print journalists into video ones, using pocket-sized, low-cost cameras.

Directly after the revolution, this same multimedia department produced a long, low-budget documentary film titled “Reporting … a revolution.” The documentary featured our struggle as young journalists between the duty to report and the urge to revolt. It was well-received in the Berlin, Rio de Janeiro, Rome and Seoul international film festivals.

The organization was growing steadily and changing face.

The weekly magazine Al-Siyassy was launched with a similar young professional team. A print house was established to break out from state paper Al-Ahram’s monopoly, and Egypt Independent was launched. We co-organized with private TV channels the country's first (and only) presidential debate.

I was promoted to the position of managing editor of the Arabic website in late 2010. In the beginning, the challenge seemed enthralling. The job entailed direct and close interaction with senior editors of the print edition, besides sharing the newsroom.

It was like being thrust into a battlefield, the mission all the more difficult because I was the first and only woman in a managing editor position. Our working culture was alien to a society monopolized by men who deal with journalism as a strictly hierarchical field in which professional accountability is taken personally.

Integration between print and online was systematically challenged. But we had the management’s support, so we recruited more likeminded young journalists for the website while making sure to strike a gender balance. We developed an editorial policy for the site, introduced new innovative formats, and published opinion articles from young writers with fresh experiences and relevant analytical tools.

But the cruise did not last for long. With the rise of Islamist Mohamed Morsy as president, the media scene was becoming even more polarized. Colleagues at the print edition were striving to remain independent, but the management, represented in the largest shareholder, started to interfere heavily in the daily editorial process.

Eventually, I resigned last year after being questioned for running a news story that, though factual and correct, the owners did not like. I was dismissed from my position, so I requested an investigation into the incident.

The investigation was conducted by a well-known lawyer who claims to belong to the Egyptian rights movement, yet he did not hold it in the face of owners who held the purse strings.

“Are you naive? What did you expect would be the result of an investigation carried out by my own lawyer?” Salah Diab, the largest shareholder at his luxurious office situated on the top floor of a Zamalek building, told me.

“I pay Al-Masry Al-Youm’s legal adviser. I can determine the result of the investigation by a phone call,” he said.

I may have been “naive,” but mine is the naivety of a generation that launches revolutions and brings down regimes by its spontaneous bias to simply do what seems legitimate and right.

Diab’s words reminded me of my naivety when I filed a report in May 2005 against former Interior Minister Habib al-Adly and ex-President Hosni Mubarak with the prosecutor general, who was a Mubarak loyalist. At the time, I had witnessed and documented with my camera the regime-supported sexual harassment of female protesters who took part in a protest against constitutional amendments.

I was absolutely confident that my report would lead to the impeachment of Adly — it simply seemed legitimate. The prosecutor general shelved the report, but my generation later gave both Adly and Mubarak a lesson they and their successors will never forget.

Al-Masry institution witnessed sudden radical changes over a short period of time. Abdel Wadood, the young liberal CEO who believes in independent journalism, was replaced by the state-run Al-Ahram veteran Abdel Moneim Saeed. Yasser Rizq, who had worked most of his life at state-run Al-Akhbar, was also appointed editor-in-chief of the print edition.

Al-Siyassy was closed. Egypt Independent was under threat.

An online editor-in-chief position was created at the Arabic website and filled with a man in his fifties from Al-Ahram who systematically distorted the online editorial policy upon orders from owners.

At the moment, it seems to be the multimedia department’s turn to be liquefied. The department is still run by a young, bright filmmaker who belongs to the independent school of cinema. Its apparent self-destruction process serves one of the owners, who has a media production company to which he is seeking to transfer the assets of the department in a clear conflict of interest that the higher-ups to be overlooking.

It's crystal clear to me that the current structure of media ownership is only going to continue to reproduce the same old, polarized, colored journalism that is used to serve owners’ interests.

What is also obvious is that this “naïve” generation of journalists will create alternative media ownership structures, liberate FM waves and do what they believe is legitimate and right.

Final Issue: For a new generation of physicists, change was unwelcome 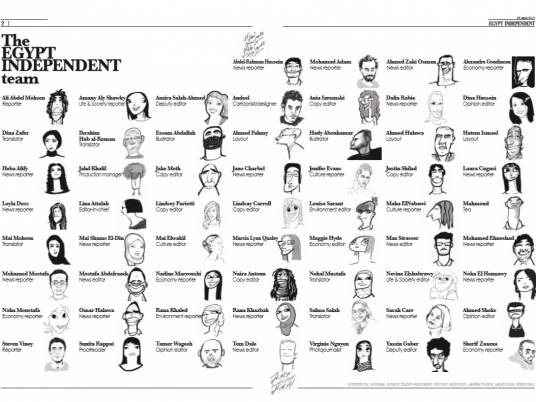