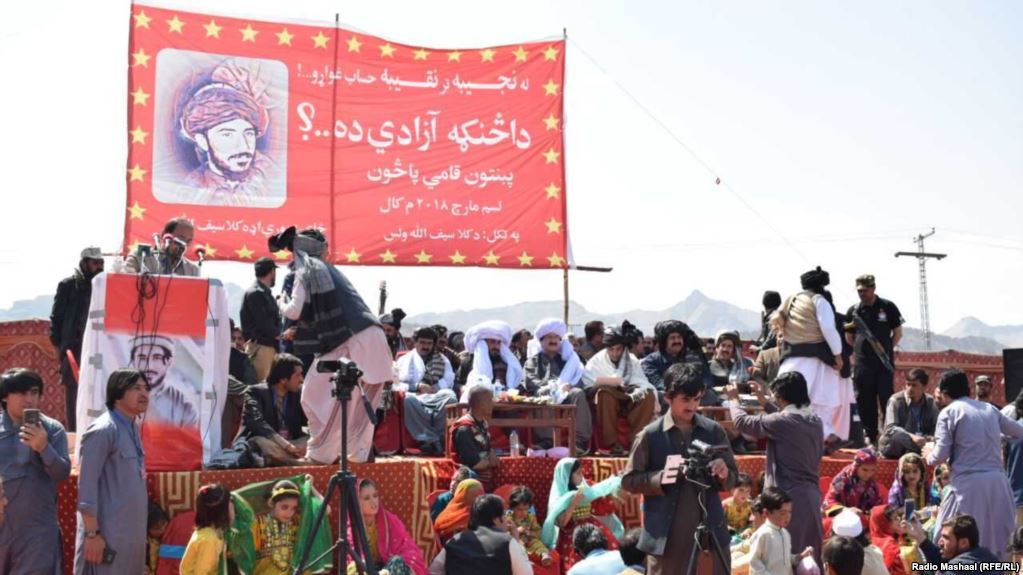 ISLAMABAD (Reuters) – The arrest of a group of ethnic Pashtun activists at a rally in Pakistan this week rekindled an angry row with neighboring Afghanistan on Thursday as Afghan President Ashraf Ghani condemned Islamabad’s treatment of the protesters.

The members of the Pashtun Tahaffuz Movement (PTM) were detained during an Islamabad protest against police violence on Tuesday, the latest in a series of moves against the group which was founded a year ago to protest the death of a Pashtun man killed by police in the Pakistani port city of Karachi.

Islamabad’s crackdown against the group, whose support comes mainly from the northwestern region of Khyber Pakhtunkhwa, has drawn criticism and protests from over the border in Afghanistan, where Pashtuns are estimated to be the largest single ethnic group.

Tuesday’s incident, reopening longstanding tensions between Kabul and Islamabad, comes as Pakistan has been supporting efforts to open a peace process with the Taliban to end more than 17 years of war in Afghanistan.

“The Afghan government has serious concerns about the violence perpetrated against peaceful protesters and civil activists in Khyber Pakhtunkhwa and Balochistan,” Ghani, himself a Pashtun, wrote in a tweet.

Pakistani Foreign Minister Shah Mahmood Qureshi rejected Ghani’s comment. “Such irresponsible statements are only gross interference,” he said in a tweet, adding that Ghani should focus on the “longstanding grievances of the Afghan people”.

Mohsin Dawar, a member of parliament and founding member of PTM, said police had singled Loni out and beat him to death.

A police spokesman said Loni died of a heart attack after clashes between protesters and police.

PTM leader and member of parliament Ali Wazir told Reuters that 18 activists were still in custody after one of those detained was released this week.

“It is shocking that the Pakistani authorities have resorted to such heavy-handed methods,” Amnesty South Asia researcher Rabia Mehmood said.

PTM blames the military and other state agencies for what it says are forced disappearances resulting in thousands of missing persons’ cases, mainly from the Pashtun region bordering Afghanistan.

The group is viewed with deep suspicion by the military which says it undermines Pakistan. The army has said it does not detain individuals without evidence.

The arrest last month of senior PTM leader Alamzeb Mehsud in Karachi drew an outcry on social media. He was charged under anti-terrorism and public order laws, but his supporters say he was arrested for protesting against abuses by the military.

Following a series of nationwide protests last year, hundreds of PTM activists were arrested and detained across the country in a large-scale crackdown.