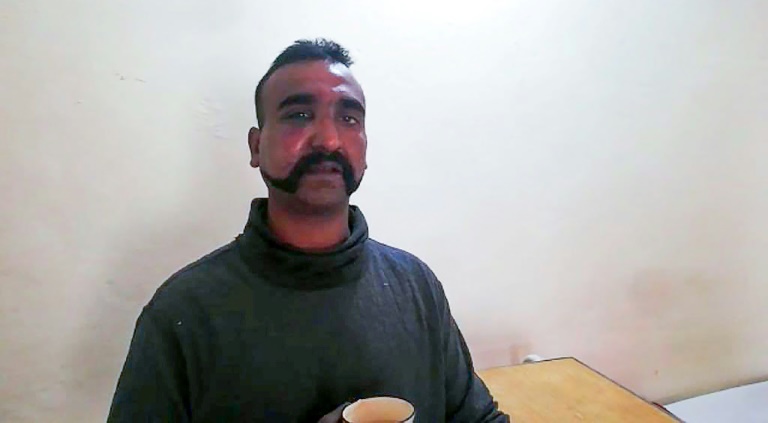 Pakistan was set to free a captured Indian pilot Friday in a “peace gesture” aimed at lowering temperatures with its nuclear arch-rival, after rare aerial raids ignited fears of a dangerous conflict in South Asia.

Wing Commander Abhinandan Varthaman, who has become the face of the crisis between Islamabad and New Delhi, will be handed back to Indian officials at the Wagah border crossing on Friday afternoon, Pakistani foreign minister Shah Mehmood Qureshi said.

In New Delhi the announcement of his release was seen as a diplomatic victory, with Indian leaders welcoming the pilot’s return but announcing they would remain on “heightened” military alert, showing little sign of de-escalating the rivalry.

Abhinandan was shot down over Kashmir on Wednesday, after a dogfight in the skies over the disputed Himalayan region which sent tensions between India and Pakistan to their highest levels in years and alarmed world powers, who issued calls for restraint.

“As the prime minister has said, as a peace gesture and to de-escalate matters, the Indian pilot will be released. So today, this afternoon, he will be released at Wagah,” Qureshi told a joint session of parliament Friday.

The Wagah crossing gate is famed for hosting an elaborate daily ceremony by Indian and Pakistani soldiers at sundown. Thousands of people had already gathered on the Indian side early Friday to welcome the pilot home, an AFP journalist said.

The pilot’s parents traveled to Amritsar, near Wagah, via Delhi late last night and were applauded by all the passengers on the plane they traveled on, TV footage showed.

Media on the Pakistani side were being stopped by authorities around 1.5 kilometers (a mile) from the border.

The surging tensions had prompted Pakistan to close down its airspace, disrupting major routes between Europe and South Asia and grounding thousands of travelers worldwide.

On Friday morning the Civil Aviation Authority (CAA) announced a decision would be taken on re-opening airspace “shortly”. Earlier it had said flights would remain grounded until at least 1.00 pm Friday local time (0800 GMT).

The latest confrontation between the neighbors, who have fought three wars since independence in 1947, erupted after a suicide bombing in Indian-held Kashmir killed 40 Indian troops on February 14, with the attack claimed by a Pakistan-based militant group.

It was the first such aerial raid since their last war in 1971 – before either country had nuclear weapons.

An infuriated Islamabad denied casualties or damage, but a day later launched its own incursion across the Line of Control, the de facto Kashmir border.

That sparked the dogfight that ended in both countries claiming they had shot down each other’s warplanes, and Abhinandan’s capture.

Residents on either side of the LoC also reported heavy shelling, which continued into the early hours Friday.

Analysts said the pilot could prove to be Islamabad’s trump card, but Prime Minister Imran Khan unexpectedly announced Thursday that he would be released a day later in the first sign of a potential thaw.

Khan alluded to the catastrophic consequences of nuclear war and called for talks, even as he warned India should not take the announcement as a sign of weakness.

With the pilot attaining hero status and the hashtag #WelcomeBackAbhi swiftly trending on social media, India’s Prime Minister Narendra Modi called on his citizens to “stand as a wall” in the face of an enemy that “seeks to destabilize India”.

The last time an Indian pilot was captured by Pakistan, in 1999, the handover was facilitated by the Red Cross (ICRC), who met Flight Lieutenant K. Nachiketa at the Pakistani foreign office in Islamabad before escorting him to the Indian high commission overnight.

He left for India that same day.

On Friday a Red Cross spokesman told AFP the aid organization is “ready to provide any assistance necessary”, but so far “is not involved” in Abhinandan’s return.

Kashmir is ruled in part but claimed in full by both India and Pakistan. Two of their three wars have been fought over the territory.

Pakistan claims to shoot down Indian jets in Kashmir