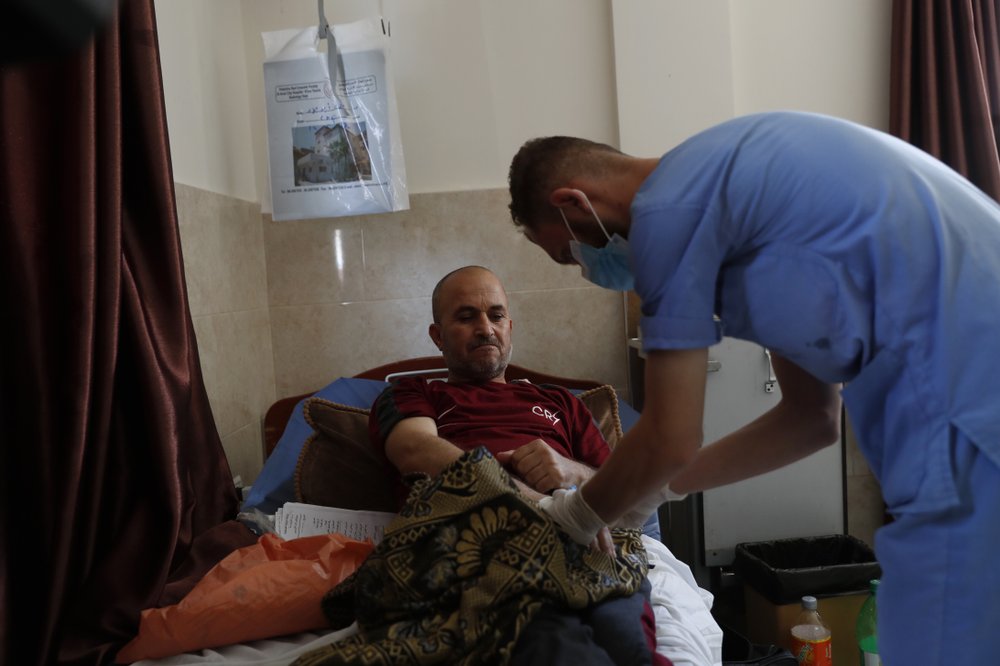 KHAN YOUNIS, Gaza Strip (AP) — Jomaa al-Najjar was desperate to send his two-month-old daughter Joud out of the Gaza Strip to Israel for urgent medical treatment for epilepsy. But with the Palestinian Authority refusing to relay his request, there was no way to coordinate her transfer.

This week, she died in a Gaza hospital.

The refusal to process requests for medical permits is part of a larger decision by the Palestinian Authority to sever ties with Israel. Aimed at protesting Israel’s plans to begin annexing parts of the occupied West Bank, the move has instead hurt many Palestinians.

Severely ill Palestinians in the Gaza Strip have been hit especially hard, unable to receive life-saving treatments available only in Israel or Israel-annexed east Jerusalem. At least two infants unable to cross into Israel have died since the decision was taken.

“Every patient with an urgent condition must be considered without delay,” al-Najjar said.

Al-Najjar’s case illustrates the Palestinians’ dependence on Israel, borne of a half-century of military occupation, and the tough choices they face in resisting its drive to annex territory in line with President Donald Trump’s Middle East plan.

Last month, Palestinian President Mahmoud Abbas said the authority was no longer bound by previous agreements with Israel going back to the 1990s, which created the PA. He suspended all ties with Israel, even security coordination.

The Palestinians view Israel’s proposed annexation of the Jordan Valley and its Jewish settlements as an existential threat because it would make it virtually impossible to create a viable Palestinian state in the West Bank, Gaza and east Jerusalem, lands seized by Israel in the 1967 war. European and Arab nations have expressed similar concerns.

Yet the Palestinians have little if any leverage. The decision to cut ties does not appear to have changed Israel’s calculations, even as it has had painful, unintended consequences for the Palestinians. A refusal to accept tax transfers collected by Israel each month, for instance, has left the authority unable to pay the salaries of its tens of thousands of workers.

“We are on the brink of medical chaos,” said Physicians for Human Rights-Israel, a humanitarian group. It said the Palestinian Health Ministry has also stopped covering the cost of treatment in Israeli hospitals, meaning that organ transplant patients are unable to return for post-surgery rehabilitation. The group has appealed to Israeli authorities to ensure the continued movement of Palestinian patients to Israel for treatment.

“Now, hundreds are affected. Thousands will be affected soon,” it said.

In the West Bank, Palestinians seeking medical care can go directly to Israeli military authorities to apply for permits.

But Gazans face a more difficult task. Israel withdrew from the territory in 2005, and two years later, the Islamic militant Hamas seized power from Abbas’ forces. An Israeli and Egyptian blockade aimed at weakening Hamas, and three wars between Israel and Hamas, have severely degraded Gaza’s health system.

Patients requiring advanced treatment usually travel to Israel, east Jerusalem or the West Bank. They need Israeli permission for all three. Egypt has sealed its border with Gaza since March due to the coronavirus.

Hamas has no direct contacts with Israel, but allows a PA-run liaison office in Gaza to coordinate the entry and exit of medical patients, even during the wars.

An officer posted there, speaking on condition of anonymity because he was not authorized to speak to media, said it received orders from the PA at the beginning of June to halt all contacts with Israel and stop answering the phones.

The Palestinian Center for Human Rights, a Gaza nonprofit, briefly stepped in to help coordinate the permits, but stopped after Israeli media reported the arrangement.

“We see the patients, listen to them, look into their eyes and their children’s and parents’ eyes, and it was very difficult to take this decision,” said Raji Sourani, the director of the group, which used to help 200 to 300 patients a month.

“Unfortunately, the Israeli politicization of this issue put our backs against the wall,” he said.

The lack of any coordinating mechanism means patients like Jehad al-Qedra are stuck. The 52-year-old has a tumor blocking his nasal passages, causing constant, severe headaches. This month he was approved for radiotherapy treatment at Augusta Victoria Hospital in east Jerusalem, but he can’t get a permit to travel there.

“I don’t know what will happen or where I will go,” he said from a hospital bed in the southern Gaza town of Khan Younis, where doctors can only offer painkillers and IV drips. “This is insane; this is neither life nor death.”

Ibrahim Melhem, a Palestinian Authority spokesman in the West Bank, defended the decision to cut ties.

“Israel is the occupying power on the borders of Gaza and it bears responsibility for the results of delaying or preventing patients from crossing to hospitals in Jerusalem and the West Bank,” he said.

In January, close to 3,000 Gazans left for treatment via the Erez crossing with Israel, according to UN figures. That number plunged in the following months as authorities heavily restricted travel to prevent the spread of coronavirus, but 188 crossed in April.

Gisha, an Israeli nongovernmental organization that advocates for Palestinian freedom of movement, said Israel, the PA and Hamas must protect that right. It called on Israel to “identify an immediate solution to meet the urgent needs of Gaza’s residents for movement, especially patients in need of life-saving treatment.”

COGAT, the Israeli defense body that coordinates civilian Palestinian affairs, said it “keeps allowing, also at these times,” the entrance of Gazans for medical treatment. It did not elaborate.

In the meantime, Mahmoud al-Astal waits beside his son’s hospital bed. Ismail al-Astal, 16, needs urgent radiotherapy for a brain tumor.

“Life has no taste when you are watching your son in danger and you cannot do anything to help him,” he said.

Image: In this Tuesday, June 16, 2020 photo. Palestinian nurse checks a cancer patient Jehad al-Qedra, 52, while he received his treatment at a hospital in Khan Younis refugee camp, Gaza Strip. The Palestinian Authority’s decision to cut all ties with Israel was intended to make it pay a price for pressing ahead with plans to annex parts of the occupied West Bank. (AP Photo/Adel Hana)

US officials to meet this week on Israel annexation plan