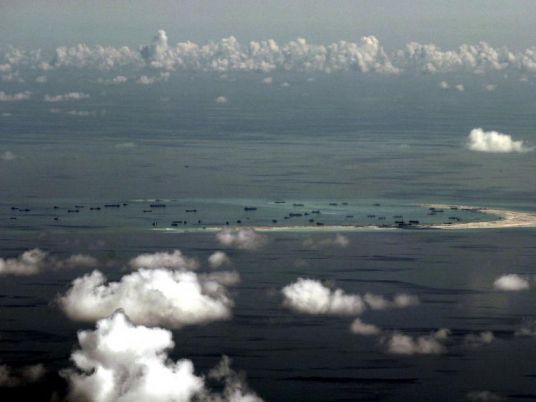 US Defense Secretary Ash Carter called on Wednesday for an immediate end to island-building by China and other countries near the South China Sea, urging the participants to stop militarizing the dispute and find a peaceful solution.
Carter said China's island-building efforts were "out of step" with the regional consensus and that US military aircraft and warships would continue to operate in the area as permitted under international law.
"China's actions are bringing countries in the region together in new ways," he said in a military ceremony in Hawaii. "They're increasing demand for American engagement in the Asia-Pacific. We're going to meet it."
"We will remain the principal security power in the Asia-Pacific for decades to come," Carter said.
Carter's comments, at Pearl Harbor, came a week after the US Navy sent a P-8 reconnaissance plane carrying navy and television camera crews to film Chinese island-building activity in the disputed Spratly Islands in the South China Sea.
In Beijing, the foreign ministry said the United States had "double standards."
"I want to empathize that the US has been selectively mute on individual countries that have selectively occupied China's islands and reefs, but have made irresponsible remarks on the construction activities that are lawful, fair and reasonable within China’s scope of sovereignty," ministry spokeswoman Hua Chunying said at a regular briefing on Thursday.
"The Chinese people can make their own judgement. No one has the right to tell China what to do," she added.
US officials say China has added some 2,000 acres (800 hectares) to five outposts in the Spratlys, including 1,500 acres since the start of this year.
"We want a peaceful resolution of all disputes, and an immediate and lasting halt to land reclamation by any claimant. We also oppose any further militarization of disputed features," Carter said in his remarks.
"With its actions in the South China Sea, China is out of step with both international norms that underscore the Asia-Pacific's security architecture," he added.
The US aircraft that flew near the Spratlys was repeatedly warned by a Chinese navy radio operator to leave the area.
The islands are claimed by several other countries in the region, including Vietnam, the Philippines and Malaysia.
Manila has been particularly vocal in the region in criticizing China's reclamation work, and Philippine Defense Minister Voltaire Gazmin had talks with Carter while attending the ceremony in Hawaii.
"The US expressed alarm on unilateral activities that are inconsistent with international law," Gazmin said in a text message. "Unilateral actions escalate tensions which may lead to actual conflict. Actions that could lead to accidents and untoward incidents due to miscalculations should be avoided."
Carter is on the first leg of a trip that will take him to Singapore for the annual Shangri-La Dialogue security conference and then on to Vietnam and India, where he will discuss maritime security issues and boosting security ties.
His comments came at a change-of-command ceremony for the US military's Pacific Command, which is responsible for US forces in the Asia-Pacific region.