Mohamed Fanni, Professor of Robotics and Mechatronics at the Egypt-Japan University of Science and Technology (EJUST), announced on Monday that a research team from EJUST has succeeded in manufacturing the first innovative industrial robot with international specifications.

The team used locally-sourced parts that are less expensive and more efficient than their imported counterparts. 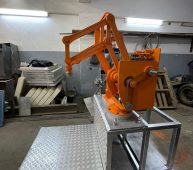 Fanni said that the new robot has a unique structure that combines the advantages of serial robots (specifically their capability to perform in a large workspace) and parallel robots (known for their speed and accuracy), as the new robot uses rotational motors to perform linear motions that have multiple industrial applications.

In a statement to Egypt Independent, Fanni added that the robot can be used in many different industrial sectors such as food, plastics, home appliances, and automotive parts.

The robot’s construction is part of a bigger plan to boost Egypt’s industrial sector, according to Fanni.

“In particular, we aim to build a novel 3D interconnected translational industrial robot that we have developed in the last five years. We then aim to establish a company in EJUST to build and sell these robots for commercial use,” Fanni added.

The proposed new industrial robot has a large workspace-to-size-ratio, comparable to those of serial robots. It has also high speed, accuracy and rigidity like parallel robots. Its unique structure brings combined advantages that make it superior to other industrial robots, a statement from the university said.

The robot has a balancing system that uses small-sized motors, which reduces power consumption dramatically. This makes it a strong competitor in the market from both an engineering as well as an economic standpoint. 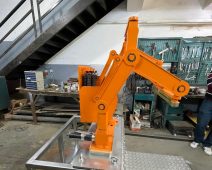 Fanni said that this invention will encourage many Egyptian investors to modernize and automate the country’s industry, as the cost of purchasing will be less than imported robots, and spare parts will be readily available at a low price.

“Our main objective is to contribute in the economic development of Egypt through manufacturing. For the first time in Egypt, we have a robot that can contribute to the country’s fourth industrial revolution.”