The Egyptian archaeological mission working in the cemetery of the sacred animals Necropolis in Saqqara Archeological Area uncovered the first and largest cache at the site.

This dates back to the late period, during the work of the fourth excavation season of the mission.

The Secretary-General of the Supreme Council of Antiquities and head of the mission, Mostafa Waziri, explained that the discovered cache includes 150 bronze statues of various sizes of a number of ancient Egyptian deities, including Anubis, Amun Min, Osiris, Isis, Nefertum, Bastet, and Hathor. 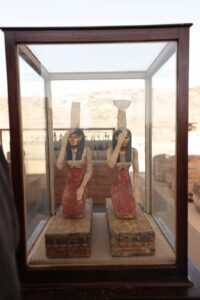 It also includes a group of bronze vessels related to the rituals of the goddess Isis, such as sistrums, as well as a bronze statue of the engineer Imhotep without a head, very precise and beautiful.

Waziri added that the mission was also able to discover a new set of burial wells, in which a group of 250 colored wooden coffins from the Late Period, about 500 BC, were found, closed and containing mummies in good condition of preservation, in addition to a group of amulets and wooden statues, some of which are gilded and other colored wooden boxes. He pointed out that the excavations inside one of the discovered burial wells resulted in the discovery of a coffin containing a papyrus in a good state of preservation, possibly containing chapters from the Book of the Dead.

It was transferred to the restoration laboratories of the Egyptian Museum in Tahrir for sterilization, humidification, study and knowledge of the texts it contains. 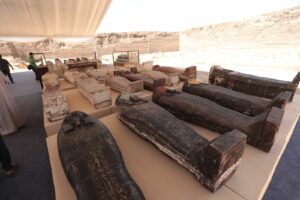 The mission also found two colored wooden statues with a gilded faces, in a good state of preservation, for the two goddesses Isis and Nephthys in the position of mourners, in addition to finding a burial from the New Kingdom around 1500 BC, containing many adornment tools such as a bronze mirror and a group of bracelets, necklaces, earrings and anklets have their own staples and copper tools for everyday life. 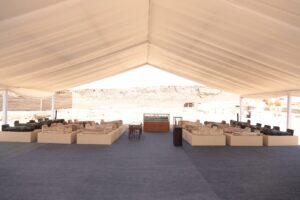