On Monday, Egypt’s Minister of Tourism Khaled al-Anani toured the Grand Egyptian Museum (GEM) to follow on its progress, prior to the museum’s opening later this year.

Anani was accompanied by the project’s supervisor, Atef Moftah, Secretary-General of the Supreme Council of Antiquities, Mostafa Waziri, and Assistant Minister for Archaeological Affairs in the museum, Al Tayeb Abbas. 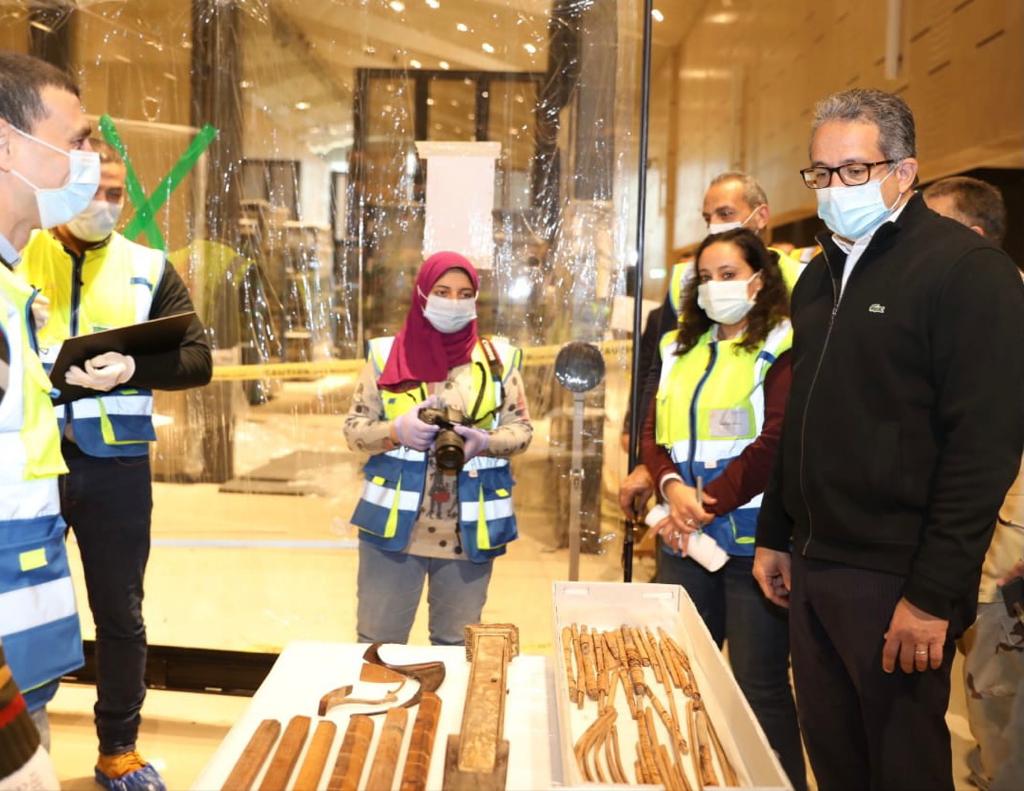 IMAGE: Khaled al-Anani witnesses the placement of the first pieces of the treasures of King Tutankhamun in the display vitrines in the Grand Egyptian Museum

The quartet watched archaeologists and restorers place the first of King Tutankhamun’s treasures into display cases and viewed the newly restored statue of King Ramses II, which sits at the museum’s entrance.

The statue of King Ramses II is about 8 meters high and weighs about 30 tons. The king stands with his left foot forward, holding some scrolls in his hands and wearing a short royal kilt with folds and pleats. He wears a belt bearing his name that is decorated with ornaments  with ornaments. Behind the statue is a back pillar inscribed with hieroglyphic text.

The group also checked out the stairs within the museum and the statues of King Sonnet I. IMAGE: Khaled al-Anani witnesses the placement of the first pieces of the treasures of King Tutankhamun in the display vitrines in the Grand Egyptian Museum

During the tour, Anani thanked everyone involved in the project, commending the cooperation between the Supreme Council of Antiquities and the museum and praising the team spirit and effort exerted in the process of transporting, restoring and placing artifacts in the exhibition halls.

The GEM was originally supposed to open in 2020, however, the opening was postponed due to the coronavirus pandemic.  It is now scheduled to open in 2021, although a specific date has yet to be announced.

The museum will be one of the largest museums worldwide dedicated to a single civilization. It will also display, for the first time, King Tutankhamun’s entire collection, including 2,000 artifacts that have not been seen by the public.

Minister of Military Production conferred with Romanian Minister of Economy