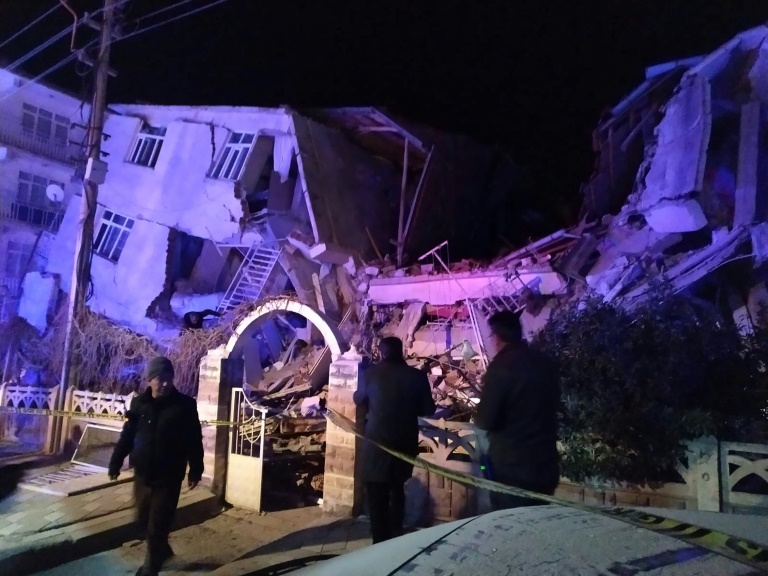 A powerful earthquake has killed at least 21 people and injured more than 1,000 in eastern Turkey, as rescue teams searched through the rubble of collapsed buildings for survivors on Saturday.

The Turkish government’s disaster and emergency management agency (AFAD) said in a series of tweets early on Saturday that five people were pulled alive from the rubble in the eastern province of Elazig.

State news agency Anadolu said among those found alive was a pregnant woman who was rescued 12 hours after the quake hit.

At least 30 people were missing following the magnitude 6.8 quake on Friday night, which had its epicenter in the small lakeside town of Sivrice in Elazig.

“It was very scary, furniture fell on top of us. We rushed outside,” 47-year-old Melahat Can, who lives in the provincial capital of Elazig, told AFP.

Eray Ernek described how he was watching television when the quake took place. “I was on the sofa and then fell on the floor. My sleeping father was woken up.

“After we found a way out, we broke the door and got out. We saw other houses had collapsed.”

President Recep Tayyip Erdogan said all steps were being taken to aid people affected by the quake, which caused widespread fear.

“We stand by our people,” Erdogan said on Twitter.

AFAD said the quake hit Sivrice at around 8.55 pm (1755 GMT). Turkey lies on major faultlines and is prone to frequent earthquakes.

Turkish television showed images of people rushing outside in panic, as well as a fire on the roof of a building.

Interior, environment and health ministers, who were in the quake zone, said the casualties were in Elazig province and in the neighboring province of Malatya, which lies to the southwest.

At least 21 people died including 17 in Elazig and four in Malatya and 1,030 others were injured, according to AFAD.

Among those injured were residents in the southeastern provinces of Diyarbakir, Batman, Sanliurfa, Adiyaman and Kahramanmaras, it added.

Rescue teams were searching for survivors trapped in a five-storey collapsed building in a village some 30 kilometers from Elazig, according to AFP journalists at the scene. One person was pulled alive from the rubble.

Sports centers, schools and guest houses had been opened to accommodate quake victims in Malatya.

Sivrice — a town with a population of about 4,000 — is situated south of Elazig city on the shores of Hazar lake — one of the most popular tourist spots in the region and the source of the Tigris river.

The lake is home to a “Sunken City”, with archaeological traces dating back 4,000 years in its waters.

The tremor was felt in several parts of eastern Turkey near the Iraqi and Syrian borders, the Turkish broadcaster NTV reported, adding that neighbouring cities had mobilised rescue teams for the quake area.

“Everybody is in the street, it was very powerful, very scary,” said Zekeriya Gunes, 68, from Elazig city, after the quakes caused a building to collapse on her street.

“It lasted quite long, maybe 30 seconds,” added Ferda, 39. “I panicked and was undecided whether to go out in this cold or remain inside.”

The US Geological Survey assessed the magnitude as 6.7, slightly lower than AFAD, adding that it struck near the East Anatolian Fault in an area that has suffered no documented large ruptures since an earthquake in 1875.
Demiroren News Agency (DHA)/AFP / DHA The quake in eastern Turkey caused several buildings to collapse

“My wholehearted sympathy to President @RTErdogan and the Turkish people following the devastating earthquake that has hit Turkey. Our search and rescue teams stand ready to assist,” Greek Prime Minister Kyriakos Mitsotakis wrote on Twitter.

In Athens, the Greek premier’s office said later that Mitsotakis had spoken by phone to Erdogan.

“The Turkish president… said Turkish teams had the situation under control for now and that it would be re-evaluated in the morning,” his office added.

In 1999, a devastating 7.4 magnitude earthquake hit Izmit in western Turkey, leaving more than 17,000 people dead including about 1,000 in the country’s largest city Istanbul.

Experts have long warned a large quake could devastate the city of 15 million people, which has allowed widespread building without safety precautions.

Image: DHA/AFP / DHA The epicenter was in the small lakeside town of Sivrice in the eastern province of Elazig