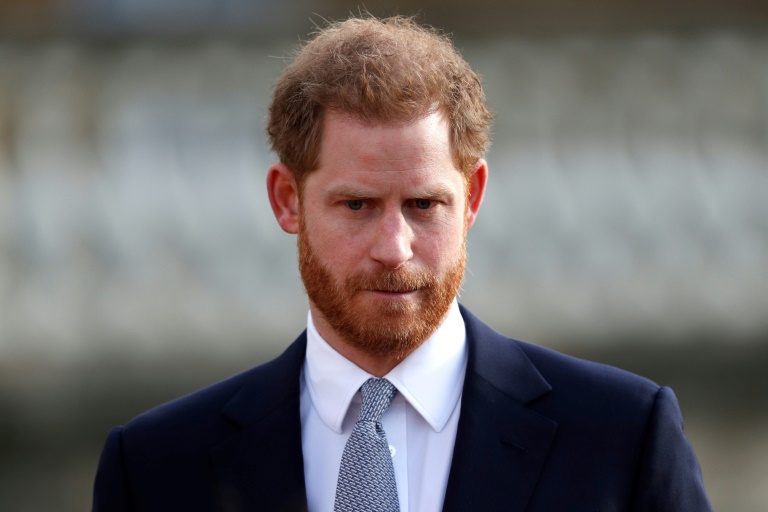 Britain’s Prince Harry expressed “great sadness” on Sunday at he and his wife Meghan being stripped of their royal titles as part of a historic separation settlement with the Queen.

But he said he saw no other way out but to give up his royal role in search of “a more peaceful life” with his American former actress wife and baby son Archie.

“It brings me great sadness that it has come to this,” Harry told supporters of his Africa-based charity in London. His emotional first remarks since the separation were aimed at calming a crisis that has shaken the very foundations of Britain’s ancient monarchy.

Harry also confessed to some trepidation at taking the momentous step of resigning from daily duties and charting a new life abroad.

He said he had always been ready lose the public money that supported his lavish lifestyle but admitted it pained him to have to give up the military titles and patronages he was awarded after serving two tours in Afghanistan with the British Army.

He read from prepared remarks and appeared tense as he sought understanding from a nation that has had a soft spot for him since his childhood — and which now now appeared confused by his decision to leave his royal life behind.

“We are taking a leap of faith — thank you for giving me the courage to take this next step,” he said.

The “Megxit” crisis began on January 8 when the couple’s plans to seek a “progressive new role” in North America were announced without Queen Elizabeth II’s royal assent.

“I know I haven’t always gotten it right, but as far as this goes, there really was no other option,” Harry said.

The couple lost their right to be called “his and her royal highness” (HRH) — much as Harry’s late mother Princess Diana did when she divorced Prince Charles in another family drama that upset the Queen in 1996.

They further agreed to repay £2.4 million ($3.1 million) of taxpayer’s money spent on renovating their Frogmore Cottage home near Windsor Castle.

“No royal has ever paid back money,” former royal press secretary Dickie Arbiter wrote in The Sun on Sunday.

“It is absolutely unprecedented.”

But Arbiter said it was the loss of the HRH “royal highness” abbreviation that really made Palace history.

“Even when Edward VIII abdicated (in 1936) he dropped from being His Majesty The King to HRH the Duke of Windsor,” he said.

Few know what Meghan — a global star with a huge social media following and A-list celebrity friends such as Oprah Winfrey and the Obamas — thinks of the British brouhaha about ancient acronyms.

The 38-year-old frankly admitted on UK television in October that she “really tried to adopt this British sensibility of a stiff upper lip.”

But she admitted sadly: “That’s not the point of life.”

Harry has also talked about still being haunted by his mother’s death in a 1997 car crash involving a chasing pack of paparazzi.

He and Meghan filed a series of lawsuits against UK media outlets in October — a step that outraged the tabloids and renewed debates about the royals’ role in public life.

One of these involved a UK paper that published fragments of a private letter Meghan had sent her estranged father Thomas Markle after her Windsor wedding to Harry in May 2018.

Thomas told Britain’s Channel 5 over the weekend that he found Meghan’s decision to quit the royals “embarrassing”.

“I think both of them are turning into lost souls,” her father said.

The expensive lawsuits and the possibility that they might have to start paying for their top-notch security detail raise the immediate question of how they will make ends meet.

The Daily Telegraph reported on Monday that Prince Charles would probably continue paying his son some money from his private income for the next year.

Harry has undisclosed millions of pounds in savings and Meghan has enjoyed a lucrative acting career. She is now also thinking of starting her own line of health and “wellness” products.

The Sunday Times asked a royal aide if Harry and Meghan will be able to cash in on the “Sussex Royal” brand they trademarked in December.

“That is still one of the areas being worked through,” the royal aide told the paper.

“That translates as: ‘The Queen isn’t at all sure’,” The Sunday Times wrote.