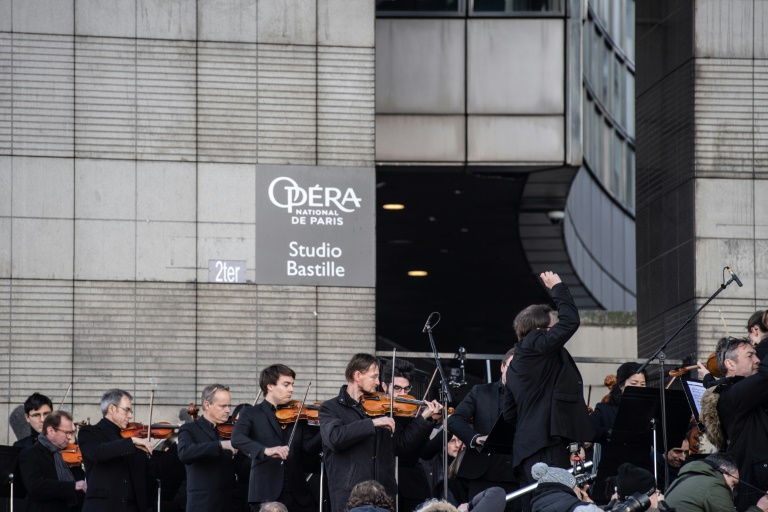 Paris Opera musicians on Tuesday gave a symphonic show of support for the grinding transport strike over the French government’s pension overhaul.

The orchestra musicians set up on sunlit steps outside the Bastille Opera to play for several hundred passers-by, many capturing the concert on cellphone cameras as cars clogged the nearby roundabout.

It chimed in with the protests that have led to a crippling transport strike that has greeted President Emmanuel Macron’s reform, which would also remove the opera employees’ right to early retirement.

“We still refuse to participate in any parody of negotiations,” a musician told the crowd before the start of the concert.

The repertory included classics like “The Damnation of Faust” by Hector Berlioz and “The Dance of the Knights” from the Romeo and Juliet by Sergei Prokofiev, and ended with a rousing rendition of the “La Marseillaise,” France’s national anthem.

Paris Opera employees are covered by one of France’s 42 separate pension schemes, which often offer early retirement and other benefits to mainly public-sector workers.

Their plan, introduced by king Louis XIV in 1698, allows them to benefit from a pension as early as 42, to compensate for the strains on bodies during careers that can begin while people are still in their teens.

The government has already indicated that a single points-based system sought by President Emmanuel Macron would apply only to employees hired after January 2022, according to a letter from government officials to the head of the Paris Opera seen by AFP.

But so far that doesn’t appear enough to appease the troupe, which largely has refused to perform since the beginning of the strike on December 5.

That has led to cancellations of dozens of performances at the Bastille and Garnier opera houses, costing at least eight million euros ($9 million) in lost revenues, the Paris Opera said last week.

“We refuse to be the gravediggers of our own retirement system,” the musicians said in their message.

On Christmas Eve, dancers in white tutus performed from “Swan Lake” on the steps of the Garnier Opera, in scenes that quickly went viral on social media.