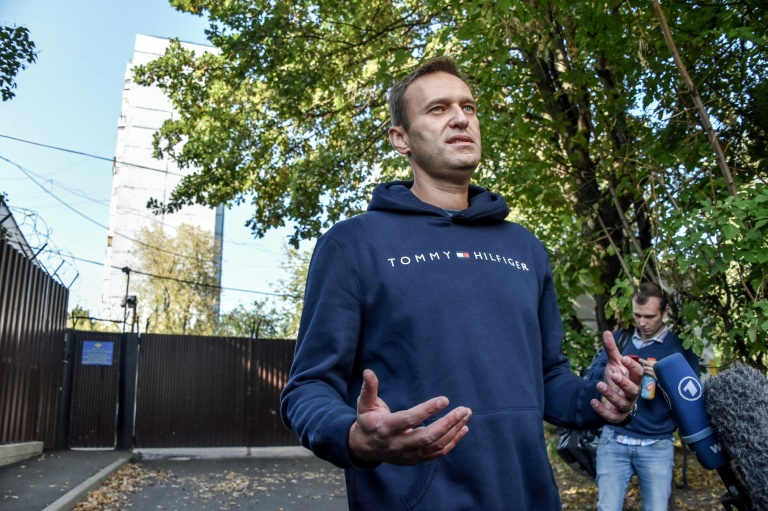 Kremlin critic Alexei Navalny was released on Friday after serving 30 days in jail for planning opposition protests, which have grown into a movement that has shaken Moscow since last month.

Police were present outside the prison on his release but made no move to re-arrest him, as they have when other opposition figures were freed recently.

But he has continued to urge his supporters to take to the streets, which could lead authorities to detain him once again.

Navalny emerged from jail smiling, wearing a sweatshirt and sports trousers and with a bag slung over his shoulder.

The opposition leader and anti-corruption campaigner immediately condemned “acts of terror” by Russian authorities in putting down protests in Moscow in recent weeks.

“The movement will continue to grow and the regime will strongly regret what it has done,” he told journalists.

AFP/File / Yuri KADOBNOV Since mid-July, Moscow has seen a wave of opposition rallies drawing tens of thousands onto the streets

Navalny was arrested in Moscow on July 24 as he left his home to go jogging and buy flowers for his wife’s birthday.

The 43-year-old Yale-educated lawyer was sentenced to 30 days in jail for violating laws on the organisation of demonstrations.

During his incarceration, he was treated in hospital for what doctors called a “severe allergic reaction”, while Navalny said he might have been “poisoned”.

Since mid-July, Moscow has seen a wave of rallies drawing tens of thousands onto the streets after opposition figures, including allies of Navalny, were barred from standing in elections to Moscow’s city parliament on September 8.

The protests took place in the context of wider anger over declining living standards and a stalling economy.

Police have arrested around 3,000 people at the biggest demonstrations the country has seen in years, but most were released shortly after.

However, around 10 remain in pre-trial detention and face up to eight years in jail for participating in what prosecutors call “mass disorder”. Several others are facing related charges such as attacking police.

Most opposition leaders who have been banned from participating in the Moscow vote have been jailed for violating protest laws.

Investigators this month also raided the office of Navalny’s anti-corruption foundation as part of a probe into alleged acceptance of donations of laundered money and a court froze the organisation’s accounts.

As he enters his third decade in power, President Vladimir Putin’s approval ratings have dropped significantly and critics say the authorities fear any outlet calling for wider political change.

Putin spoke publicly about the movement for the first time during a visit to France on Monday, vowing to prevent the emergence of any mass demonstrations in Moscow like the “yellow vest” anti-government protests that erupted in France late last year.