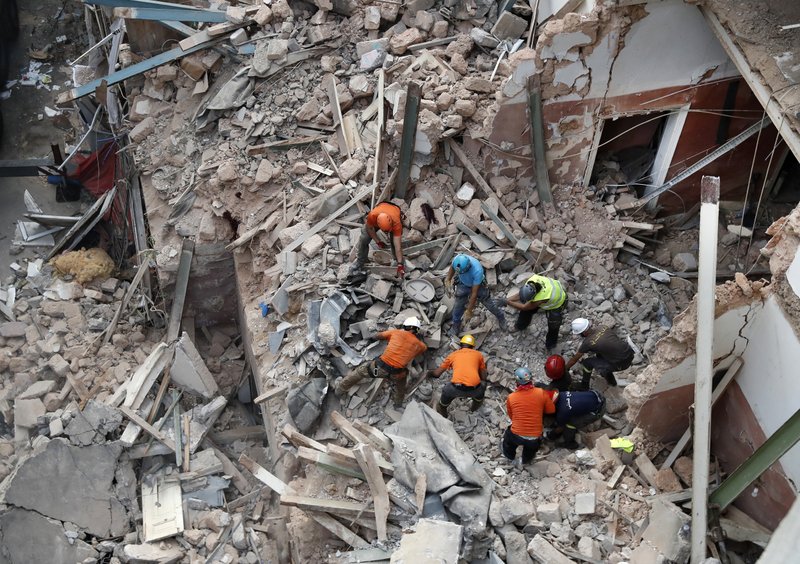 BEIRUT (AP) — Rescue workers resumed search operations early Friday in a building that collapsed last month in Beirut’s deadly blast in hopes of finding a survivor under the rubble after a pulsing signal was detected.

The search came as Lebanon was to mark one month since the blast that killed and wounded thousands of people and traumatized the country. A moment of silence was planned at 6:08 pm, the moment that marks the most destructive single incident in Lebanon’s history on Aug. 4.

Search operations first began Thursday afternoon after a sniffer dog belonging to a Chilean search and rescue team detected something as the team was going through the neighborhood of Gemmayzeh and rushed toward the rubble.

After hours of searching the work briefly stopped after sunset before some protesters arrived at the scene claiming the Lebanese army had asked the Chilean team to stop the search. The protesters started searching themselves until members of Lebanon’s Civil Defense team arrived an hour after midnight and resumed work.

The army issued a statement Friday saying the Chilean team stopped work half an hour before midnight for fears that a wall might collapse, endangering them. It added that army experts inspected the site and two cranes were brought in to remove the wall and the search resumed.

On Friday morning, rescue workers were slowly removing debris with their hands and shovels digging a hole in the building. The more they dug, the more careful the work became to protect any possible survivors under the rubble.

On Thursday, the team used audio detection equipment for signals or heartbeat and detected what could be a pulse of 18 to 19 beats per minute. The origin of the pulsing signal was not immediately known but it set off a frantic search and raised new hope.

On Friday morning, the beats dropped to seven per minute according to reporters at the site.

Still, it was extremely unlikely that any survivors would be found a month after the August blast that tore through Beirut when nearly 3,000 tons of ammonium nitrate ignited at the port. The explosion killed 191 people and injured 6,000 others and is considered to be one of the biggest non-nuclear explosions ever recorded. Thousands of homes were damaged.

“Ninety-nine percent there isn’t anything, but even if there is less than one percent hope, we should keep on looking,” Youssef Malah, a civil defense worker, said Thursday. He said the work was extremely sensitive.

A Chilean volunteer, however, said their equipment identifies breathing and heartbeat from humans, not animals, and it detected a sign of a human. The worker, who identified himself as Francesco Lermonda, said it is rare, but not unheard of, for someone to survive under the rubble for a month.

The past few weeks have been extremely hot in Lebanon, including a current heat wave with high levels of humidity.

Every now and then, the Chilean team asked people on the streets, including a crowd of journalists watching the operation, to turn off their mobiles and stay quiet for five minutes so as not to interfere with the sounds being detected by their instruments.

Two days after the explosion, a French rescue team and Lebanese civil defense volunteers had looked into the rubble of the same building, where the ground floor used to be a bar. At the time, they had no reason to believe there were any bodies or survivors left at the site.

Image: Lebanese and Chilean rescuers search in the rubble of a collapsed building after getting signals there may be a survivor, early Friday, Sept. 4, 2020, in Beirut, Lebanon. A pulsing signal was detected Thursday from under the rubble of a Beirut building that collapsed during the horrific port explosion in the Lebanese capital last month, raising hopes there may be a survivor still buried there. (AP Photo/Hussein Malla)

'Now we are ruined': Lebanon's embattled savers try to rebuild